Majin and the Forsaken Kingdom Review

Simplistic combat and tedious backtracking don't fully diminish the pleasures of this attractive and festive fable.

In Majin and the Forsaken Kingdom, the fate of the world is in the hands of a giant beast with the mind of a 4-year-old child. That beast is Teotl, and he's your constant companion in this charming and somewhat tedious action adventure. Teotl has shrubs growing on his back, cries out "Ouch!" when he falls over, and has difficulty forming full sentences. He's not a likely candidate for the position of "kingdom savior," but his kind ways will put a smile on your face, as will the attractive world he inhabits. The game constructed around this simpleminded guardian isn't as inviting as his broad smile or his sparkling surroundings. Monotonous backtracking and uninspired combat can bring the momentum to a halt, and Teotl's one-note dumb-galoot persona makes it difficult to invest in your relationship with him. But many of the game's environmental puzzles shine, as do the enchanting visuals and twinkling soundtrack. Majin and the Forsaken Kingdom isn't likely to capture your imagination, but its bearable lightness of being makes for a refreshing fairy tale.

Teotl is the legendary guardian, a being who is rumored to possess the skill necessary to rid the kingdom of the darkness--a black ooze gradually engulfing the land, as well as spawning goopy guards and demonic dogs. After a short search, you discover the beast, but he has lost all his power and memories. Your goal: to help him restore both; by doing so, you enable him to destroy the source of the darkness. From here, the lumbering lug tails you for the entirety of the adventure, helping you fend off your foes and using his elemental powers to assist you in solving various puzzles. Your relationship with Teotl is central to the story; the two of you spend a dozen hours with each other, so you'd expect to form somewhat of an attachment. Unfortunately, this is only partially the case. On the one hand, Teotl is a good-hearted buddy, and there is some delight in piecing together his memories, which are told in gorgeous two-dimensional cutscenes. On the other hand, Teotl is not intelligent. He speaks in broad, childish language and spouts such exclamations as "It take away my power!" In time, the oafish language stops being charming and just seems forced. The lack of delicacy and wit makes this a shallow friendship.

You encounter more characters than just Teotl, such as the birds and mice that drop hints throughout the course of your travels. Sadly, most of the voice actors playing them seem to have been pulled from the low-tier talent pool, which further diminishes the tale's impact. The rest of the sound design pulls through nicely, though. Small touches, such as the chimes you hear after successfully solving a puzzle have a pleasant Pavlovian effect, and the soundtrack, while not a standout, uses twittering woodwinds and sonorous cellos to evoke mythical meadows and evil monsters. Those meadows are attractive ones, too, with plenty of glimmering particles to indicate a touch of enchantment. Like the music, the visuals aren't stunning, but the subtle particulars make a big difference. For instance, the sticky darkness that starts to envelop you as you lose health is a great detail, and Teotl's wide-eyed facial expressions betray his childlike wonder.

It's a good thing that Majin and the Forsaken Kingdom's environments are so colorful, given that you spend so much time gazing at the same ones time and time again. The game is structured as a set of central areas connected by corridors. To progress, you must solve environmental puzzles, and to do that, you must restore the guardian's powers. As these powers are added to Teotl's repertoire by way of the large fruits you discover, he can then interact with objects in new ways. Wind is the first elemental power you discover, which comes in handy when you need to set a swinging object in motion. Then comes lightning, which is necessary for powering various levers and lifts. Fire allows Teotl to ignite explosive crates and suck up flaming barriers, while the fourth and final power allows him to turn blotches of sticky darkness into crystal.

Most puzzle-related actions are contextual: you select the object you want your partner to target, and he interacts with it in the appropriate way. Many of the puzzles are quite clever, such as those in which Teotl uses a catapult to fling you to out-of-reach areas or you must place lightning rods in the appropriate positions to establish a flow of electricity. These are sometimes made more challenging by additional obstacles, such as unblinking eyes that zap you with lasers if you wander into their field of vision. None of these conundrums are insurmountable with a little bit of thought, though you might need to survey the area to see which objects your buddy can manipulate. There are helpful visual cues to nudge you in the right direction, too. A lizard on the wall indicates a place where you should command Teotl to crouch so that you may jump from his back, while a wooden wall with crisscrossing red beams indicates a barrier that can be smashed.

Navigating these puzzles comes with some drawbacks, many of them relatively minor. For instance, it can be difficult to select an object (say, a tower that Teotl can rotate) from your own vantage point because the targeting reticle focuses on one specific portion of the object rather than the whole thing. In other cases, the unresponsive jumping can complicate platforming puzzles. (Be sure to tap the button a half-second before you think you need to.) But it's the backtracking that too often intrudes on the joy of puzzle solving. Unlocking a new power often means trudging through areas you've already explored several times and fighting the enemies that infinitely respawn there. You might end up wandering a bit, hoping to stumble across puzzles you couldn't previously solve. This bit of aimlessness could have been mitigated by great back-and-forth dialogue between you and Teotl or by superb combat--but Majin and the Forsaken Kingdom doesn't offer these things.

That isn't to say that the combat is bad, only that it is uninspired. You don't do a lot of damage on your own, and the weak splats you hear when you slash away at lanky demons and goo-covered brutes are good reminders of this. You need your indomitable partner at your side in most circumstances. You can command him to breathe fire or spew lightning or blow wind or crystals toward a target, which will generally knock the victim back and make it vulnerable to your attacks. When the dark soul is weakened, you can hit the combo button, and Teotl will usually join you by flinging you onto your enemy or swinging you around. These attacks look flashy and dramatic, which makes them fun to perform--at least at first. It's also a joy to watch Teotl engage his demonic foes. He announces his intentions in advance ("I make lightning!") and issues forth a dramatic burst of elemental energy. Even his standard wallops are a hoot to observe because his movements and blows look so weighty.

Unfortunately, Teotl seems to be having more fun than you. You only have two standard attacks, and they can't be strung into more complex moves. You earn new combos, but these are just more effective versions of the same one-button buddy move. Most combat comes down to the same actions, over and over: Pound on the attack button, issue commands to your overgrown pal, and occasionally respond to a button prompt to pull off your fancy finisher. The simple combat would have been more engaging if it were more fluid, but a little awkwardness tends to intrude. Hits don't always connect when you think they should. You can dodge out of the way, but you don't necessarily roll in the direction you push the analog stick. You can throw rocks at flying foes to knock them to the ground, but the lock-on targeting is inexact. As a result, combat becomes a chore, and you might wish you could return to the world's crystal corridors and arid deserts without having to stop and fend off the same old formations of creatures each time.

Some areas offer great alternatives and additions to a direct fight, however. You can lure enemies into the open and have Teotl push a boulder into their ranks. You might climb up to a ledge and assist your friend by dropping an explosive barrel onto the combatants. Even better, just avoid combat altogether by sneaking up on adversaries and offing them in a great-looking assassination. Of course, you can't sneak up on any of the game's imposing-looking bosses. The boss battles provide Majin and the Forsaken Kingdom's finest moments and smartly (considering the weak combat) play out more like exciting puzzles than traditional boss fights. You bash on these incredible hulks with your weapon, but most of the time, you are concerned with using the environment to weaken them. That may involve luring a blind boss into an electric trap of your making or having Teotl light a bomb and then throwing it into your enemy's gaping mouth. The multipart final boss fight isn't terribly difficult (none of them are, actually), but it provides an entertaining and theatrical conclusion to this parable.

It's easy to admire Teotl's dedication to your friendship, though that relationship rings hollow. The guardian is a sympathetic but wholly underdeveloped character who makes a better gameplay mechanic than traveling companion. Underdeveloped, too, is the combat, which is more fun to watch than it is to perform. Yet vivacious visuals, creative puzzles, and fun bosses make for a genial journey through a land with enough subtle delights to keep you interested. Majin and the Forsaken Kingdom is too mundane to evoke euphoric bliss, but it still exudes a touch of magic. 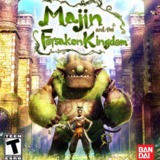 Majin and the Forsaken Kingdom
Follow
$29.99 on Walmart
Buy