Cowled craziness. That’s on tap with Magicka: Wizard Wars, a free-to-play multiplayer take on the action-first franchise that features those iconic wizards who have always reminded me of Star Wars' Jawas--only fancier. Despite this frenzied focus, much of the appeal of the core series has been maintained, due to the continued emphasis on slick player skill over gimmicks, and a genial, if bloody, sense of humor. There are a few rough edges here, however, thanks to some design miscues, a slightly buggy client, and a level grind that kicks in long before you get bored with incinerating enemy Gandalfs. Yet even with these issues, the game’s pace and light-hearted take on everything (how could I stay mad at a game that uses a corny Arnold Schwarzenegger impersonator to call the action?) keep you coming back for more, even while the flaws try to nudge you away.

Basic gameplay breaks standard Magicka down to online battle arenas where mages duel to the death. The general feel is similar to the earlier games in the franchise, albeit without any single-player campaign or any sort of cooperative multiplayer. Here, you create one of the franchise’s trademark spunky magic users at the start of play and then head into one-off battle arenas. Over time, your spell-slinger develops by gaining experience points, leveling up, and acquiring gear and special magical attacks that let you become a more efficient mystical killing machine. Two forms of currency are used in the game. Mastery tokens earned with every level up allow you to purchase special gear, spells, outfits, and the like, while crowns awarded at the end of every match can be used in the in-game store to buy similar weapons, magic rings, and so forth. Real money can be used to buy gear directly and load up on both tokens and crowns, in case you want to cut some corners.

The game deals with primary magical talents that are performed by pressing the Q-W-E-R and A-S-D-F keys. Each one represents a particular arcane skill--fire, healing, death magic, lightning, and beyond--all of which can be called up via a quick key-press or three and then put into play through a click of the mouse. Those special magicks are one-off spells that are slotted in the 1-4 keys for occasional use. They are best when you need to go nuclear on enemies by using the likes of a meteor shower that covers the battlefield, a thunderstorm that calls up devastating lightning, or something a little more subtle, like haste (to run away) or midsummer’s blessing (to heal everyone simultaneously).

None of this is easy. While you can lean on simple presses, and you can of course deploy the big-gun magicks as needed, key combos are required for the best spells and the best blocks. So, hello there, steep learning curve and a whole lot of experimentation (although the game thankfully gives you tips for fending off specific attacks every time you’re killed). It took a long time for me to even start to become comfortable with the controls, and I was still routinely schooled by opponents the entire time I played.

I was never smacked around so hard that I became overly frustrated, though. Whether I was toasted by flames, blown up by a meteor strike, or even perforated by an enemy imp familiar when I wasn’t paying enough attention, I was able to laugh it off and dive right back in for more. Speed is the primary element staving off annoyance. It’s tough to stay mad for long when you’re respawning in seconds. The tactical layer of the game is another successful factor, too. A huge importance is placed on spell defenses, so I looked at the game as something of a strategic puzzle, and constantly went into new matches to test new possibilities.

The color palette is almost unrelentingly bright, with mages apparently costumed by Crayola, and spells going off like huge displays of the very best in modern fireworks technology.

But while the core structure of Magicka: Wizard Wars works well due to its reliance on strong core mechanics, there isn’t a lot of depth here. There are just three modes of play, and the only one worth playing is Wizard Warfare. This is a pick-up-and-play mode, with simple rules that see two teams of four duking it out over stone circles that serve as control and spawn points. It moves quickly, due to small maps and teleportation rings that let the teams get into each other’s hood-hidden faces. I found that the zippy speed kept things likeably nuts and even helped emphasize teamwork, as the team must stick close together, help heal one another, and assault control points as a unit in order to survive.

Soul Harvest is the other headline mode of play, but it plays much slower and as a result isn’t nearly as exciting. It features a more involved structure that has you slaughter monsters for souls in kind of a battle of attrition, with the final goal of demolishing the enemy home-base effigy. None of this jibes with the game’s strengths as a battle royal at warp speed. Teams patrol the map, kill wimpy respawning monsters over and over, and attempt to avoid one another. Duel is even flimsier, albeit for the opposite reasons. It is fast, with cramped battlefields that allow no leeway. There doesn’t seem to be room here for much more than toe-to-toe magical slugfests.

All three modes of play are made more entertaining by colorful visuals and bombastic sound. This isn’t a game to take seriously, even with wizards regularly exploding into bloody chunks. The color palette is almost unrelentingly bright, with mages apparently costumed by Crayola, and spells going off like huge displays of the very best in modern fireworks technology. Sound is also compellingly boomy and whooshy, and the aforementioned Schwarzenegger soundalike is hilariously understated. I never got tired of hearing him tell my team that a spawn point had been stolen by the enemy and that I needed to “steal it baaack!”

The free-to-play structure causes problems, however. Both the mastery tokens and crowns are slow to accumulate and the prices for items are through the roof. The 25 tokens you might earn per level don’t go very far when the average mastery upgrade costs 50 or more. Making matters even worse, all mastery gear is nested in locked trees that force you to buy three or four items you don’t want, just to get one that you do. The same goes for the store: the average match brings in only a few hundred crowns, while even the lamest gear has a price tag of at least 5,000 or 10,000. After the first five or six levels, the game feels like a grind.

The temptation, of course, is to spend real money on upgrades such as the heavily promoted experience boosters and wizard starting packs (which seem reasonably priced, as far as these things go). But with that said, you can’t buy your way to success. Although picking up some extra goodies with cash can put you over the top, the game is all about player skill and speed. No matter how cool a robe you have, no matter how powerful your magic items and special spells, you can still be killed by a rival player with basic gear and faster fingers. So there really is a balance here, even with the grind providing ongoing temptation to whip out your credit card.

More options need to be provided. I really wanted the ability to trick out Wizard Warfare matches. Just being able to play best two out of three would have helped keep the momentum flowing, as the one-off games that generally last just four or five minutes are the only ones currently available. I spent way too much time on the matchmaking screen, waiting for the same four or five minutes on average (much longer later at night) to get a game. I’m not sure if these waits mean that there aren’t very many players online or if this is some shortcoming of the software. Regardless, I spent about as much time waiting for matches to be made than I did actually battling mages.

Another shortcoming is the inability to boot players. Although I didn’t have a ton of trouble with griefers, I did encounter at least a few idiots who just ran around maps killing anyone and everyone indiscriminately and still clocking high scores. There needs to be a way to kick these people out, or at least to stop rewarding them for killing allies.

On occasion, bugs interfere with setting up matches. I encountered frame-rate glitches, stutters in the main menus, and the odd crash to the desktop. I also encountered a “Code Marlin” error that made it impossible to start a game. Whenever this would occur, the game would refuse to register that there was a full complement of eight players logged in, even though everyone was apparently ready to go on the starting screen. Since this error seemed to take place in bunches, this got frustrating real fast, as it would block matches from starting for 10-minute stretches.

As entertaining as Magicka: Wizard Wars can be, the game has yet to achieve greatness. The quick-paced and skill-driven combat system casts a charm on you in the beginning, but the delights wear off over time due to the presence of only a single good mode of play, grinding, and a few irritating bugs. The game's heart beats strongly, strengthened by great control mechanics and colorful warfare. But Wizard Wars needs work if it is going to realize its full potential. 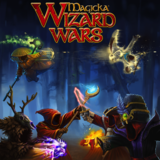 Magicka veteran Brett Todd put enough effort into learning the skill-based magical combat system of Magicka: Wizard Wars that he should be able to cast some real spells anytime now. 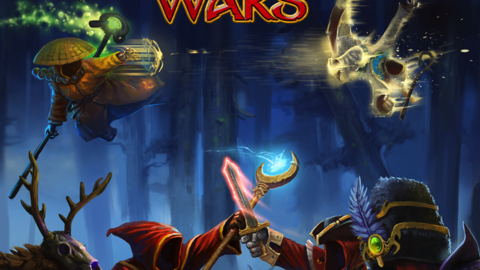 Magicka: Wizard Wars is a sandbox action PVP game that tasks you with forming teams of four and blazing your way across the battlefield together.