Magical Tetris Challenge is a winner of a game.

On a platform deluged with puzzle games, Capcom adds one more to the fray with the release of Magical Tetris Challenge. What began on the N64 as a decent combination of Tetris variants has been shrunk down, enhanced, and greatly improved for Nintendo's pint-sized handheld.

At first glance, Magical Tetris Challenge (MTC for short) may look like Tetris with a Disney license slapped on. However, the reality is that MTC combines seven of the best Tetris variants with an entertaining Disney-esque storyline. The names have been changed to protect the guilty, but it's a fair description to call MTC a combination of Tetris, Tetris Attack, Tetris Plus, The Next Tetris, and The New Tetris. When you first turn on the cartridge, you can play four of the seven Tetris types: normal, upside down, magical, and harmony. The final three types can be unlocked later via MTC's quest mode.

Normal Tetris is standard Tetris. The player must align quad-cubed shapes left and right across the screen to form lines, which in turn disappear. Upside-down Tetris is similar to normal Tetris, but the lines you clear end up increasing the height of your opponent's pile. Magical Tetris removes this penalty-lines aspect, opting instead to send across bizarre Tetris shapes. Imagine getting a Tetris piece in the shape of a letter U, or maybe a Z, and you have the idea. Harmony Tetris is a two-player game in which each player must clear lines in tandem with the other. If one player fills too many more lines than the other, the game ends.

Three more Tetris variations: signal Tetris, towering Tetris, and target Tetris can be unlocked by defeating the game's Pokemon-style quest mode. In quest mode, you take control of Mickey, Minnie, Goofy, or Donald, in an effort to accrue Tetris challenge coins. Obtain the required pattern of coins, and you can become mayor for a day and unlock another Tetris variant.

Not only has Capcom driven home a gameplay treat with MTC, but the visuals and audio have also come along for the ride. Graphically, the Tetris pieces are easy to see, background graphics are nondistracting, and the Disney characters are all nicely drawn and animated. Imagine Tetris DX with cute Disney artwork, and you have a pretty fair idea of this game's visuals. Supporting this graphical deluge, the music and sound effects further add to MTC's delightfulness. In-game tunes are catchy and upbeat, while the sound effects do their job without distracting the player. Overall, Magical Tetris Challenge is a winner of a game. Solid gameplay, excellent graphics, quality sound, support for two players, and the quest mode all combine for replay value that's out of this world. 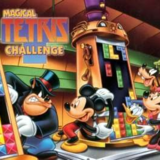