This electronic version bears little resemblance to the original.

If you've never played the card version of Magic, you will find it nearly impossible to understand what is happening Acclaim's adaptation, because the manual is a flimsy 30 pages (the rule book for the card game alone was over 60 pages) and this electronic version bears little resemblance to the original.

Imagine moving six creatures around a battlefield, defending yourself, and casting spells (which requires you to scroll through an assortment of cards, pick one, and then tap the appropriate color mana), while your computer-controlled opponent is rocking your world with speed, agility, and pinpoint accuracy. Anyone who has played the original version of Magic will have a hard time figuring out why Acclaim decided to make this a real-time strategy game. Real time destroys the beauty of the game - figuring out the perfect combination anticipating your opponent's next move - and destroys the Zen-like experience of the card game.

Acclaim's adaptation allows two types of gameplay. Players can opt to go mano-a-mano against another planeswalker or attempt to conquer all of Corondor in campaign mode. For those of you who remember Defender of the Crown, the strategy portion of Magic is very similar. You start with one parcel of land and must conquer other tracts one by one until you've gained total control over Corondor. Unfortunately, the campaign mode is nothing more than a choose-your-own-adventure story where you read some text and, according to your response, either gain control of the land or not. New underwear on Christmas is more fun than this.

Although the card artwork, cutscenes, and stills are beautiful, the dueling graphics are substandard. It is difficult to tell exactly where rival planeswalkers are or which creatures you are controlling while in combat. The score and sound effects are repetitive and minimal. Gameplay follows the ancient way of the three T's: torturous, taxing, and tedious. There is a patch available that corrects the performance of a few spells and improves the network capabilities of the game, but it doesn't change enough to significantly improve the gameplay.

Even in its unfinished state, MicroProse's long-awaited Magic: The Gathering looks much more promising than Acclaim's finished product. But until that version is released, Magic fans will just have to break open a new deck and wait. 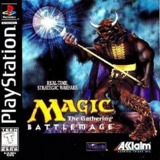 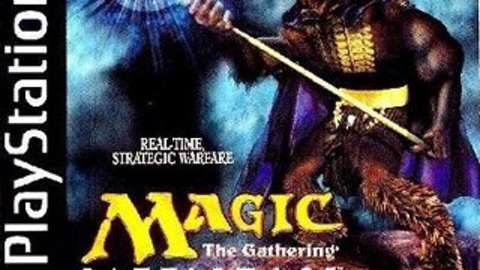 This electronic version bears little resemblance to the original.