This is the way the Saturn ends, not with a bang but a whimper.

The story of Magic Knight Rayearth's localization is perhaps unmatched in gaming history. Filled with embroiled legal entanglements (Working Designs demanded use of the original manga's character names), backstabbing surprises (WD and Sega's infamous "E3 booth fiasco"), shifting alliances (WD switched development from the Saturn to the PlayStation, leaving MKR's future uncertain), and righteous stands for rarely held ideals (WD has finally published the game, at a loss, because it gave its word). The story of Magic Knight Rayearth itself, on the other hand, is a generic anime tale of 14-year-old Japanese schoolgirls. And here's the rub: In the end, the game seems little more than a final punctuation mark to the localization saga. MKR can't fairly be called "old school." After nearly three years of delays, it can only be called "old."

The storyline is a textbook example of Gabriel Garcia Marquez-san's literary movement: magical schoolgirl realism. Hikaru, Umi, and Fuu, three impossibly leggy middle-schoolers, find themselves using newly imbued magical powers to rid evil from the land of Cefiro. Frilly armor, spells shouted from a suddenly present dimensional void, bumbling yet resilient opponents, evil villains who rule from floating citadels, and even giant mecha all make their contractual appearances. MKR is perhaps the first RPG I've ever played without a single major plot twist or revelation; from beginning to end, everything is exactly as it seems.

Gameplay is uninspired at best. Each girl can attack with her weapon, jump, and cast any of three spells gained throughout the game. The only "effect" items you can hold are a single health and magic potion. Dungeon layout is simplistic and unoriginal, and enemy AI patterns can be deduced within 15 seconds. Action RPGs for the Nintendo Entertainment System had more depth than this; for an end-of-cycle Saturn game, it's nearly unforgivable. The localization is vintage Working Designs: well-translated text laced with the frequent off-color joke. Each of the girls keeps her own diary of the adventure (and each diary is about as exciting as you'd expect a middle-schooler's to be). In a nice touch, each girl has a unique reaction to every object in the game, letting their personalities shine even outside of dialogue sequences.Graphically, the game is simple and unimpressive, as the Saturn game is itself a port of an earlier Super Nintendo title. Enemies and characters are small, and environments suffer from repetitive tile syndrome. The major characters' text is given emotion by a variety of well-drawn character portraits. FMV sequences, even letterboxed, come across as grainy, artifact-filled affairs. Despite this graphic simplicity, the game still inexplicably suffers from slowdown.

Aurally, the game fares slightly better. Music is catchy (if forgettable). Sound effects are well done and copious. The voice acting, as with most anime dubbing, ranges from good to painful. This leads to Working Design's strangest alteration: While the Japanese title had voice acting in all major plot sequences, the US version does not. Instead, the acting has been "replaced" by the girls' reading of diary entries. This really isn't a fair replacement. The diary writing is uninteresting to begin with, and it's doubtful most gamers will voluntarily call up Fuu's wailings when they could actually be playing the game. Removing the in-game voice acting makes a short game even shorter and bland characters even less interesting.

Collecting scattered Rainbow Amulets permits access to hidden items (including a hilarious set of voice-acting outtakes), but it's doubtful that your average player would play long enough to find them all. Nothing about the game is expressly awful. The graphics, music, sound, and gameplay aren't bad - just competent to a fault. Three years ago, MKR would have been a great title; today, its age is painfully apparent. Die-hard fans of Working Designs or the Clamp series might love the title, but all others should be wary. Magic Knight Rayearth is too little, too late, and its greatest achievement lies in finally being released. This is the way the Saturn ends, not with a bang but a whimper. 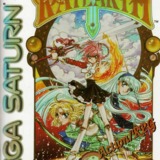