This comically savage action game overcomes its frustrations with liberal doses of blood and guts.

The Black Baron. In MadWorld, this purveyor of carnal pleasures provokes your violent tendencies time and again. After his recurring obscene tirades, a sultry gal clad in leather gear offers a visual example of the violent challenge ahead by lopping his head off with a golf club, or impaling him on a bed of spikes. She then strikes a sexy pose and slinks away, only to return when the resilient Baron has somehow recovered and again arrives with even more foul-mouthed taunts. This scenario is the essence of MadWorld: brutal, irreverent, and often hysterical. It's an overload of the senses that wallows in both its tastelessness and its striking black-and-white visual design. More importantly, this third-person action game is fun to play, though a number of gameplay frustrations hold it back from greatness. Nevertheless, MadWorld provides an adrenaline rush, with all the sensory delights and distresses that such excesses entail.

You're Jack--just Jack. You're the newest participant in Varrigan City's killing games, affectionately termed Death Watch. At the outset, MadWorld's ultraviolent game-show narrative may remind you of a grosser, grittier Smash TV, but during its short length, the story makes some curious twists. Jack is a fascinating antihero, easy to root for yet not exactly likable, and a cutscene in which he cuffs a smirking narcissist across the room is as shocking as any of the game's outrageous scenes of dismemberment. The grittiness of the story is further enhanced by MadWorld's graphic-novel looks. Aside from the copious spurts of red blood (or blue alien goo), almost everything is rendered in black and white, and for a while, it's hard not to be awed by this unusual presentation. Nevertheless, that style comes at the occasional expense of visual clarity and comfort; in time, it becomes increasingly difficult to see important items such as health drops within the busy environments. The game is at its best when played in short chunks, if only because you'll need visual and emotional relief from time to time.

Fortunately, developer PlatinumGames understands that overkill is best experienced in small bites, and accordingly a time limit has been placed on levels, which are filled with an array of horrific, murderous devices. The ShockTV viewers are a voracious bunch, and you'll earn a score based not just on how many foes you kill, but also on how violently you do it. You can impale a thug on a wall of spikes, but you'll garner more points by shoving a barrel onto his head, skewering him with a traffic sign, smacking him around a few times, and then chucking him onto the spikes. Every level is jam-packed with implements of destruction, and though you've always got a mighty chainsaw available to you, you'll use other weapons over the course of the game. A barbed club comes in handy for smashing foes around or launching them into the stratosphere; daggers afford you a spinning attack that rewards you with nice, grisly sprays of blood.

It's a constant onslaught of comic-book sadism, and accomplishing specific tasks (affixing zombies onto a fountain of blood; catching all of the alien grays) unlocks more tools of mayhem. To temper all of this killing, MadWorld also provides a constant torrent of humor, not the least of which comes from the hysterically perverse commentary provided by Greg Proops and John DiMaggio. Little of this dialogue is fit to print, and much of it is repeated ad nauseam, but it's witty and profane, so you may become red-faced both from laughter and the occasional blush. A terrific, pulsing hip-hop soundtrack complements both the chatter and the gameplay, and the crunchy, squishy sound effects are almost as gruesome as the sights. A game this violent is certainly inappropriate for kids to watch and play, so if you have sensitive ears nearby, you may want to don a pair of headphones while you shield their eyes.

MadWorld's bloodbath challenges, presided over by the aforementioned Baron, are also a hoot. These are minigames, but not the ones you're used to seeing on the Wii. Rather, these brutal bits provide some of the game's most explicit imagery, and many of them are funny in a macabre way. In one of them, you throw enemies into a giant hand, which then squeezes blood from this handful as if juicing an orange. In another, you stick your targets in barrels that then launch into the air, creating a bloody fireworks display. Most of these are enjoyable for the limited time in which they occur, though some are better than others (the imperfect targeting methods of Money Shot and Man Golf make them weaker entries). You can revisit them with a friend in a split-screen multiplayer mode in which you compete for high scores, but out of context, these challenges are far less enjoyable and get real old, real fast.

As a rule, the game's control scheme uses the Wii's capabilities well, offering sensible doses of button mashing and remote waving. As in Manhunt 2, the motion of the remote simulates the onscreen action during a variety of finishing moves, from swinging your victim around by twirling the controller, to cutting through enemies with your chainsaw by swiping with your wrist. Although most of these motions hit the right notes, some sequences require a bit too much wild shaking, and a few of these moments seem to wear on a bit too long. Nevertheless, most of MadWorld's control frustrations stem from basic annoyances that often magnify each other. The visual design and camera troubles can lead to slight disorientation, which in turn means occasionally grabbing thin air, rather than the lamp post that you meant to snatch. The lock-on option is meant to alleviate these troubles, but it doesn't always work when you need it to, especially in boss battles, where it should come in most handy.

Those boss battles are a lot of fun once you discover their tricks and weaknesses, which shouldn't take too long. Aside from aggravations like cheap attacks and the lingering camera problems, the boss fights aren't often difficult and won't require you to mix up attacks for the most part. Rather, contextual quick-time events normally do the most damage, so you'll want to keep a keen eye on the screen, considering that the onscreen prompt flashes by almost too quickly. The ensuing scenes are not only deliciously bloody, but can be rather comical as well (such as a brief instant when Jack gets distracted by his female foe's abundant frontal assets). However, should you lose in battle, be prepared: MadWorld gives you limited lives to work with, though you can pick more up within the level. Using up the last life means game over, and though the levels are short, it can still be frustrating to repeat them all over again rather than start at the beginning of the battle. That's especially true in the less consistent levels, such as one in which a couple of mechanical monstrosities, a surplus of aliens, tight environments, and a difficult camera may conspire to cause prolonged sequences of unavoidable damage.

Even if you need to replay certain sections, the experience is over in five hours or so. It's a tempting repeat visit, however, not just to beat your high score or try the unlockable difficulty, but to discover new and satisfying ways to fry your foes. Although MadWorld has its inconsistencies, adrenaline junkies will relish its visual design and steady deluge of savage death and dismemberment. 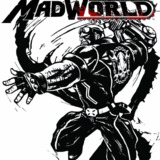