New animations, like receivers tracking the ball with their head, really give the players a life of their own.

Long-time fans of the Madden series have always known and loved Madden football for its in-depth, true-to-life football action, as well as good graphics and control. Last year's Madden, however, lagged behind GameDay, resulting in a pretty lackluster game. This year the team at Tiburon has put as much time and effort into the graphics engine as it has into the AI and gameplay. The result is a beautiful football game that is undoubtedly the most gorgeous football game on the PlayStation today. The 3D polygonal players look incredibly detailed and move with smooth realistic motion. New animations, like receivers tracking the ball with their head, really give the players a life of their own.

The AI of the computer-controlled players has dramatically improved over last year's Madden. When the computer is on defense, the way that it covers the play is very natural, and in turn, more realistic. Cornerbacks no longer look like they are simply running preset paths next to your receiver, but instead act as though they are aware of not only the man they are covering but the other receivers as well. This is demonstrated when you perform a pump-fake or a fake handoff, and the defense falls for it. The AI will recognize your patterns fairly quickly, though, and won't let you get away with too much. The sound and music of Madden NFL 99 are nearly flawless. Pat Summerall calls the play-by-play action, and John Madden is at his side offering his usual Maddenisms. The sound effects are all pretty good.

Also new this year is the addition of franchise mode. You can take your team through several seasons, participate in the draft, and basically try to manage the entire team. It's a pretty cool mode, especially since you can simulate games and skip ahead to see stats of players and how they're doing. But with Madden 99's beefier stat tracking, the players on the field aren't the only ones who are rated; you are given a performance rating as the team's manager. This lets you know how well you've managed your team.

The control feels typical of Madden football games, with one exception; the game has a new gameplay feature called one-button mode. This control setup allows for novice players to simply push one button to execute a wide variety of different moves. You push one button to hike the ball or throw the ball, and depending on a defender's distance, that one button will also execute a stiff-arm, hurdle, juke, or spin move. This one-button setup allows inexperienced players to jump in and begin playing immediately. Advanced players need not worry though; the new one-button feature is just an option, and you can still use all of the buttons to do anything you feel is necessary.

In the end, when it comes down to it, Madden 99 is simply the best Madden game to date. While this is the first NFL football game to come out this season, it's safe to say that Madden 99 will be one of the best football games to ship this year. 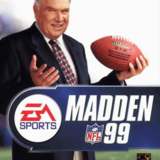