Madden 2003 is a must for anyone with even a passing interest in football.

Just a few throws downfield are all that you need to be convinced that Madden NFL 2003 is better than its predecessor. Unlike last year's game--which is best remembered for holes in the secondary that permitted the likes of Ryan Leaf to pass for more than 400 yards on any given virtual Sunday--the new game is smart defensively. Call nothing but deep routes here and your quarterback will be rewarded with lots of turnovers and a mouthful of sod. Driving the length of the field is now as tough as it should be, and as satisfying as computer sports gaming gets.

All of this means that Madden 2003 is a must for anyone with even a passing interest in football. It might very well be the finest game in the venerable history of the EA Sports series, thanks to enhancements to the artificial intelligence, spectacular production values, and a number of new game types and bonus features for both hard-core and casual pigskin fans. If not for a console-inspired interface that doesn't lend itself well to the PC and a shortsighted (not to mention tightfisted) approach to online play, the game would be inches from perfection.

But Madden 2003 is nearly flawless where it really counts. When you get down in the trenches, the game provides a remarkably authentic re-creation of the sport of football. This is particularly evident in regard to the defense put up by the artificial intelligence. Computer coaches are almost preternaturally adept at anticipating what play you're about to run, although this varies somewhat depending on which of the four difficulty settings you prefer. Run the textbook play for the situation at hand and you'll likely get stuffed. Fall into a play-calling pattern and you'll almost certainly run into a wall.

This is particularly evident when passing. Last year's game featured defensive coverage that was apparently based on zone schemes. No matter what was actually taking place on the field, the linebackers, defensive backs, and safeties would remain in loosely defined areas. The result was an inflexible style that was easy to exploit, particularly when throwing deep, because receivers could run right past defenders. That isn't the case any longer. Defensive players now demonstrate a level of situational awareness that wouldn't be out of place in the defensive backfields of the NFL elite. They react to what you do with all the smarts and speed of their real-life counterparts. Just getting open is a challenge, let alone breaking big plays on a consistent basis. Slow down a replay and you can even see backs reacting to balls in the air, moving into position for a knockdown or an interception, or to make sure that the receiver doesn't go very far.

Lifelike physics come into play no matter how you choose to move the ball. On passing plays, the intended receiver has to be in a position to make the reception. If he's not in precisely the right position and facing the right way, the pass will be incomplete. Tackles work in the same fashion. Unless the player is in the right place at the right time, he'll end up grabbing a lot of air. Hitting from an awkward angle can knock the ballcarrier down, but only if a lot of momentum has been built up. This allows you to develop a good ground game, as defenders have to get a good grip to pull down the league's top running backs. Accurately modeling physics in this way makes every play more realistic, both for the obvious reasons and because it forces players to adopt the gang tackle mentality needed when dealing with speedsters like Marshall Faulk and Marvin Harrison. It further accentuates the arcade element of Madden 2003, as you pretty much have to master juking, spinning, stiff-arming, and swimming to handle the best that the NFL has to offer.

These arcade-friendly aspects are made easier to handle this year with the addition of an entertaining minicamp mode. Essentially a series of minigames that help you hone your skills at all positions, this mode is really a computer game version of the old punt, pass, and kick competitions for kids. In this case, however, you get to visit each NFL city in the Madden cruiser and drill with the pros. You'll travel to Kansas City and attempt to make completions through hoops, head down to Dallas for some running with moving tackling dummies, shuffle off to Buffalo to swat balls with defensive backs, and more. Accumulate a high enough score in each city's drill and you will unlock a game situation. When you beat the passing drill in Kansas City, for example, you'll be put at the helm of the Chiefs offense with just two minutes left in a 14-12 game and charged with the task of moving the ball 50 yards in the air for the winning touchdown or field goal. Minicamp cities are organized into rookie, pro, all-pro, and Madden levels of difficulty. As is usual with these sorts of things, you have to beat all the drills and situations in one level before moving on to the next.

If you're a traditionalist interested only in the core football game modes, you won't be disappointed with Madden 2003. Dozens of clubs are included, ranging from classic teams to those in today's NFL and NFL Europe. Most come with team-specific stadiums, and even a range of old-time and alternate uniforms and helmets. You can take part in exhibition games, try career play with the franchise mode, practice plays, work on a two-minute drill, set up specific in-game situations, and go online to take on human opponents. Of these modes of play, franchise has been beefed up the most. All the included teams can be selected here, even the all-time clubs if you're interested in a Hall of Fame-style league. Fictional teams can also be used in franchise play now. Added detail in almost every area makes it seem like you're truly running a pro football club. Dealing with free agents and draft picks now includes lots of negotiation and the requisite obnoxious comments from agents, and you have to prepare for the future by scouting college players before the draft. Player progress can be tracked, so you can tell how those rookies are faring over time.

Many of Madden 2003's gameplay tweaks help long-term play. The game mode options now include a player selection that allows you to have plays called in by a computer coach. This is perfect when you want to abandon management duties for a game or two and see what it's like in today's NFL, where almost everything is signaled in from the sidelines. The accelerated clock feature ticks time off between plays so you get realistic numbers when playing with quarters of 10 minutes or more. Artificial intelligence sliders again allow you to adjust nearly every aspect of the gridiron game, from quarterback accuracy to the likelihood of a pass being knocked down.

Online play is more of a focus in this year's edition of the Madden series. Quick games, tournaments, and ranked matchups are available with just a couple of clicks on the login box on the main menu screen. Buddy lists are also maintained, so you know when your favorite opponents are also online and looking for a game. Unfortunately, the EA Sports Online player matching service is free for just the first 60 days. After that, a subscription fee of $4.95 a month is applied. Tokens for added time can be earned by playing games against ranked opponents, although this isn't much of an olive branch when official matching services of this kind are typically offered without charge. Furthermore, a notice on the back of the box points out that "EA reserves the right to retire the EA Sports Online support for this product after 90 days notice, or 30 days after the last game of the 2002-2003 NFL season." Which of course means that you're going to have to upgrade to Madden 2004 to continue to play online, whether you like it or not. And you might not even be able to play Madden 2003 online after the lights are turned out on Super Bowl XXXVII next January.

Otherwise, Madden 2003 has been enhanced in terms of look and sound, for the most part. This is largely due to the way that this year's PC and console versions were developed simultaneously--unlike last time around, when the PC game was a port of the previous year's PlayStation 2 release. Graphically, there is no comparison between this game and any other in the sports genre. Stadiums are livened up with operating scoreboards, animated crowds that often seem like they're made up of real individuals, lighting effects that dramatize the sun during daytime games and stadium floodlights at night, and field textures so realistic that you could almost get a grass stain on your monitor. The player models move smoothly, although there are a few animation hitches in the replay mode, where frames are skipped when the quarterback releases a pass. Mapped faces and uniforms that get dirty as you progress through a game complete the Sunday-afternoon look.

The only crack in this perfect facade is in the interface, which remains too console-centric to be anything but awkward on the PC. There are no pull-down menus, there's no double-click support, and you have to call up new menu screens to do just about anything. A series of linked icons in the revolver menu at the bottom right of every screen helps with basic navigation, though it's still too easy to get lost or confused in the early hours of play. It's a shame that Madden 2003 isn't following in the footsteps of EA's NHL 2003, which will ship in mid-September with an interface designed specifically for the PC.

Madden 2003's audio keeps pace with current tunes from Bon Jovi, Andrew WK, and others, along with good on-the-field audio effects. The broadcast-booth work from the new Monday Night Football team of John Madden, Al Michaels, and Melissa Stark is merely passable, with lots of variety in the commentary but little information being provided. Big John seems to have phoned in his lines again this year, as they never go beyond the generic. They even lapse into the monosyllabic. When you ask his advice on calling a play, the usual comment is something like, "Hey, why not try this play?" A grunt would have been just as helpful.

The awkward interface and EA Sports' questionable online policies aside, Madden NFL 2003 is a great football game. It's a great way to get warmed up for the real NFL season, which is now just a few short weeks away. The challenging difficulty, numerous modes of play, and availability of Internet opposition means that it should also be a welcome companion as that season plays out over the coming months. 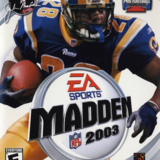 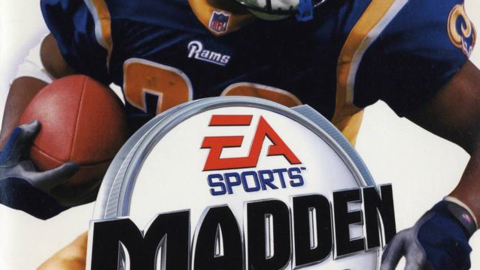 Madden 2003 for the PlayStation 2 has online play, a robust franchise mode, and plenty of secondary modes to keep you busy.