Improvements such as revamped AI, more realistic animation, and a new play-calling system make this the best Madden yet.

The annual arrival of Madden signals the end to the summer sports doldrums. The newest entrant in the long-running franchise doesn't offer a substantially different experience from last year's edition, but a number of small tweaks make this the best game yet in the series. Improved artificial intelligence on both sides of the ball eliminates much of the frustration from previous games, and a streamlined play-calling system keeps everything moving at a steady clip, letting you focus on pulling off spectacular plays rather than futzing around in menus. Commentary has also been improved, largely because the interminably dull Tom Hammond has been replaced by the vibrant Gus Johnson. But there are still a number of issues that keep Madden NFL 11 from cruising through the playoffs. The new Ultimate Madden mode is little more than a novelty and a number of odd quirks during games are real head-scratchers. Even with those problems, though, this is a great replication of the hard-hitting sport.

Gameflow is the most obvious addition to Madden NFL 11. This feature allows you to call your offensive and defensive plays with just one button press, which may sound sacrilegious to those who enjoy choosing the perfect play from a list of hundreds but is a welcome option for those who just want to focus on the action. The game does a good job of picking a reasonable play based on down, distance, and game situation, and there is enough variety in the play calling to ensure your opponent is kept on his heels. Even though gameflow offers an intelligent play most of the time, there are still some issues with this feature. Draws and screens are called on consecutive downs too often, killing the element of surprise, and the computer tends to favor the passing game even when you're tearing things up on the ground. You can always audible out of a bad call if you need to or tweak your game plan beforehand to ensure your favorite plays are called more often, but there is one other hurdle: the wildcat formation. This is as predictable in Madden NFL 11 as it is in real life, and all too often, it results in a wasted down because you can't audible to something worthwhile. Even with these issues, gameflow is a welcome addition to the franchise.

The other changes are less noticeable than gameflow, but they have a much larger effect on the action. Artificial intelligence has been greatly improved. In previous games, cornerbacks had trouble covering slant routes, but that's no longer an issue here. On the harder difficulty levels, you need to run a variety of routes to have any sort of success, so you can't just rely on a few money plays to march down the field. The offensive line is also much smarter this time, especially in run blocking. Linemen move with a purpose during plays, making it easy to follow them through a hole and giving you confidence that they'll pick up the linebacker in your path. There are still times when they turn around to block a player who is no longer a threat or simply stand still while you get flattened by a safety, but, for the most part, the improved line play makes running much more enjoyable.

As good as the offensive linemen are on running downs, they can be lousy on passing plays. There are far too many times when your five linemen will remain immobile after the snap of the ball, letting defenders crash into your quarterback like bloodthirsty barbarians. This is especially noticeable while running play action. By the time you fake the ball and get ready to pass, a linebacker will be breathing down your neck, giving you little choice but to throw the ball away and live another day. There are also strange flubs that ruin the illusion that this is real football. Quarterbacks will sometimes throw a cover-your-eyes, Jamarcus Russell-caliber pass on what should be a simple dump off in the flat, and these unfathomable passes occur even when you're standing still without a defender in sight. The ball also does not conform to real-life physics. If a safety knocks the ball away from a receiver, the ball will sometimes bounce wildly between the players, resting on the backs of their necks or helmets, which looks completely ridiculous. None of these issues are problematic enough to destroy the fun, but they are annoying and can lead to bouts of anger if they crop up during an inopportune moment.

The improved physics and animation make this the best-looking game yet in the franchise. Nevertheless, for the first time in ages, Madden is behind the competition in this area. The recently released Backbreaker still has the most vicious, realistic-looking hits, but even though Madden NFL 11 is runner-up in this area, it's certainly no slouch. The revamped physics system gives you more subtle control in your offensive repertoire. All of your jukes are mapped to the right stick, and you can twist and contort your body to pull away from a grasping defender. The sprint button has also been disabled (though you can turn it back on in the options menu), which sounds like a strange thing to remove but makes carrying the ball feel more realistic. Your speed is automatically increased if you hit a hole and can pull away from a defender, but for the most part, you just have to focus on evading opponents. You also won't outrun your blockers nearly as often, and it is fun to use them as a shield until you can break free for a touchdown.

Last year, Ultimate Team mode was offered as DLC after Madden NFL 10 was released, but it's included in Madden NFL 11 from the get go. In this mode, you create your own team and then receive a collection of random players to fill out your rosters. These players are doled out as if they were football cards, with their pictures on the front and their statistics on the back. You use this collection of athletes against either the computer or friends to earn coins that allow you to buy more players for your team. It's a neat concept, but it's not very interesting in practice. The initial assortment of players is comprised of second-tier talent that won't be recognized by anyone but dedicated NFL fans. And it takes a lot of time to unlock anyone you would actually care about. The best part of the Madden games has you taking control of your favorite franchise with your favorite players and turning them into Super Bowl champions. Ultimate Team takes away that appeal. Even though you unlock household names by winning some games, it's not worth the effort.

Madden Moments is a much more enjoyable alternative to Ultimate Team. In this mode, you replay dramatic contests from last season. Sometimes, you try to reenact improbable victories; at other times, you have to change history by coming up strong where the real-life team fell short. For NFL fans that lived through these intense situations last season, it's a real rush playing them all over again. Remember when Peyton Manning threw that embarrassing pick six in the Super Bowl? You have a chance to mount a comeback that the reigning MVP could not pull off. But there are still some issues in this mode. The most glaring problem is that you can't restart in the middle of a contest. If you throw a stupid interception or fail to recover a crucial onsides kick, you either have to go through the motions until the clock mercifully runs out or go all the way back to the main menu and reload. More troubling for big-time NFL fans is that the rosters aren't accurate. Even though these moments all took place last season, you have to use this year's rosters. It's downright laughable trying to mount a Rams comeback as Sam Bradford, when the prodigious QB was still in college last year.

Despite other modes vying for your time, Madden NFL 11 is still at its best when you're taking on a friend in competitive play. The online action is incredibly intense and downright exhilarating at times. The ebb and flow of professional football is captured beautifully here, and there's nothing like pulling out a last second victory against your gridiron equal. There is a bit of lag, which is particularly noticeable during the kicking game, but it's generally smooth and tons of fun. Cooperative action is a cool gimmick, giving you the ability to team up with up to two other friends on the same side. Each person controls a specific group of players, like linebackers or running backs, and you upgrade your abilities by completing objectives. However, it's strange to lose full control over your team. Playing as the quarterback is still much more interesting than any other position on offense, which only makes cooperative play entertaining for a few games before you just want to disband your loyalty and take your buddies on head-to-head.

Commentary is greatly improved in this edition mostly because the monotonous Tom Hammond has been relieved of his play-by-play duties by the effervescent Gus Johnson. The excitable commentator does not quite match the overwhelming joy he exhibits in real games, but he still infuses games with much needed energy. His color man is Cris Collinsworth, and though he does repeat himself a bit too often, he provides heady analysis that gives these digital events the feeling of something much larger. Unfortunately, elements of the presentation are not handled nearly as well. In Franchise mode, you can watch a weekly wrap-up show called The Extra Point that goes over the key games from the previous week and previews the upcoming slate of games. But the details are so vague that it's completely worthless. You get a box-score breakdown of the biggest games, but you won't hear any specific details on how the game played out (such as a big comeback or questionable referee call) or get any highlights.

Despite the gameplay quirks and presentation hiccups, Madden NFL 11 is still a great football game. The improved AI and enhanced physics system makes the on-field action even better than before, and the realistic commentary makes your quest for victory carry that much more weight. The changes are generally subtle, so casual football fans may not notice all the tweaks to the core gameplay. But for those who live for football and get pumped for granular changes, Madden NFL 11 once again hoists the Lombardi Trophy. 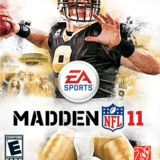 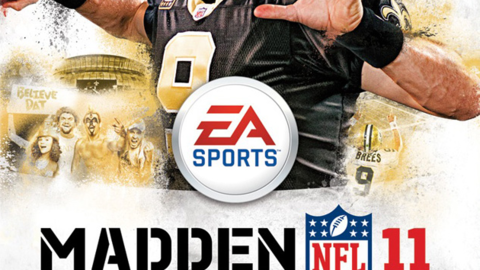 EA returns to the field with another installment in its long-running football series.