Fast-paced multiplayer with a dash of strategic depth gets Madballs rolling, but stuttering visuals and lag issues may bring your fun to a screeching halt.

You don't need to know what Madballs are (a gross-out kid's toy from the previous century) to enjoy doing battle with them in this fast-paced shooter. Madballs in Babo: Invasion may be an obscure title, but the game's roll-and-gun action is universally accessible. A variety of weapons and special powers give multiplayer combat some depth, and the fact that you have to unlock these weapons and powers means you'll reap steady rewards for continued play. Madballs is a solid third-person shooter, and rolling (a nice change of pace from walking) gives the action some invigorating momentum. Unfortunately, there are some lag issues in both single- and multiplayer that can really flatten your fun. Some players suffer only occasional hitches, while others experience flow-halting lurches so often that the enjoyable sense of momentum fizzles into frustration. If you're one of the unlucky ones, then prepare for aggravation. But if you are lucky enough to not suffer too badly, then Madballs is a fun, free-wheeling shoot-'em-up.

The basics of movement and combat are simple: roll with the left stick, aim with the right stick, and shoot with the right trigger. As you destroy enemies, you'll unlock new weapons, new characters, and new special attacks. Weapons and special attacks deepen the frantic combat. Aside from varying power, range, and fire rate, each weapon has two firing modes that deal two of the four different damage types: impact, energy, heat, and cold. Enemies and characters have different resistances and weaknesses, and choosing your munitions wisely can tip encounters in your favor. Each character has two special attacks (employed by tapping or holding the left trigger) that range from evasive (jump or speed burst) to defensive (disarm enemies or heal allies) to offensive (sprout blades or grow to a crushing size). Many special attacks cover multiple categories (such as vomit that damages enemies and heals allies), further increasing their strategic potency.

The single-player campaign is a good place to get the hang of the different weapons and abilities. The campaign features some humorous moments, largely in the form of hidden journal entries, but you'll soon grow tired of the characters' oft-repeated catchphrases. It's hard to resist groaning when you hear an eyeball say "I spy with my little eye!" for the first time, let alone the fifteenth time. Regardless, the campaign itself provides a good challenge. Enemies will overwhelm you if you aren't careful and nimble. Destroying enemies can yield health boosts, multiplier bonuses, or throwable weapons like grenades or Molotov cocktails. These bonuses are bigger if you exploit your enemy's particular weakness, and this encourages you to be more aware of the visual cues that tell you if you're using the right ordnance. There are a few sections, usually near the end of a given level, where you'll have to be particularly sharp. These tough bits are a good deal more challenging than the bulk of the level, sometimes unpleasantly so. A hearty challenge is all well and good, though you might not think so when you lose all your lives and have to restart the level from the beginning.

This penalty is a bit harsh, especially if a difficult section is made even more difficult by distracting visual lurches. These hiccups freeze the screen for a brief moment, but the action doesn't stop. When the game resumes, you will often be disoriented and possibly in danger. You can find yourself with your back to an enemy that you previously had in your sights. Or you might have fallen off a narrow bridge that you were traversing. Regardless of how often they get you in trouble, these pauses are jarring interruptions in a game that is all about smooth rolling action. The odd thing is, after trying the game on multiple hard drives and multiple Xbox 360s, we found a wide discrepancy in how often this issue occurs. They may occur harmlessly when you enter a new area and the camera is panning elsewhere, or they may happen whenever enemies spawn just offscreen. When these stutters happen infrequently, they are easy to ignore. When they happen often, they are downright aggravating.

If you are beset by this issue, switching the view from isometric third-person to top-down seems to lessen the problem. In some cases, this problem happens less frequently in online matches, which is just as well because multiplayer is Madballs' strong suit. In the fast-paced online arena, all of the aforementioned strategic elements become more important because your opponents are more intelligent. Choosing the right firing mode on your weapon can make the difference between life and death, and a well-timed special attack can snatch victory from the jaws of defeat. The action is fast, so the occasional lag issues and intermittent hitches are a bother, but it makes it much less annoying that you are respawning quickly rather than having to start a level over from the beginning. Standard deathmatch, team deathmatch, and Capture the Flag modes are here, as well as a deathmatch mode in which you play as your Xbox 360 avatar head. This is a novel mode with the added twist that you grow larger, tougher, and slower with each kill, so you have to adapt your strategy appropriately.

The other novel mode, Invasion, allows you to construct the map out of terrain tiles before each match. Placing these tiles on a grid in locations that will ensure a workable layout, players try to construct their team's side in a strategically defensible way. Teams have to control a certain number of power nodes to keep their base safe, and these elements must be placed thoughtfully if a team hopes to gain an advantage. It's a bit confusing at first, and it can be tough to tell exactly what the characteristics of a given terrain tile are. Invasion matches are ultimately decided by the same fast roll-and-gun action as every other online match, albeit with a thin strategic overlay.

There is an interesting strategic element to all the action in Madballs in Babo: Invasion, and this extra bit of depth goes a long way. The core action is twitchy and fast-paced, but if you aren't taking full advantage of your arsenal, you don't stand much of a chance. It's fun to get into the flow of combat, and even the occasional lag issues can't derail the excitement of multiplayer matches. Unfortunately, the visual lurching issue can. Both single- and multiplayer matches suffer this problem that affects different systems to different degrees. How this happens is unclear, and whether or not it will happen to you is unpredictable. If you do suffer this problem, you're in for a frustrating experience. However, it seems that in most cases, these issues weren't too bad, making the $10 gamble less risky. For those who enjoy hectic shooter action, Madballs' fun multiplayer and sizable campaign make it worth a shot. 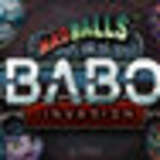 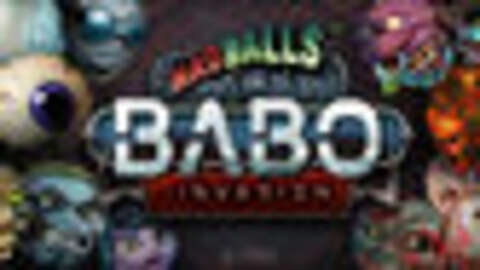 Roll around as a gun-toting Madball and blast your way through online opponents, or embark on a single-player adventure.