A mediocre shooter with repetitive and boring action.

If anything, this game's lengthy production cycle and numerous name changes should have been MGM's first clues that Machine Hunter was a lost cause. It was originally called H.O.S.T (with no explanation of the acronym) and was set for release a year ago, then the name was changed to HOST (no periods), then Droid Hunter (LucasArts probably would not have approved), then Suicide Run (are we kamikaze pilots now?), and finally Machine Hunter.

What it ended up with was a mediocre shooter with repetitive and boring action, lame visual effects, and weak sound.

The gimmick to Machine Hunter is that as you kill off droids, you become them and gain whatever firepower they had. Of course, if you're able to kill these guys with your inferior firepower, why do you need to "step-up" to theirs?

The game plays out in what MGM's marketing geniuses describe as a "multilayered 3D hell" but things look mighty 2D to me. Even using the four different camera angles, it's darn hard figuring out where walkways end and drop-offs begin. You walk under bridges but have no idea if you'll come out the other side. You can bump into bad guys in those unviewable locations and get blown to smithereens or they can shoot you from off-screen. While the enemy can leap wildly around and blast you from multiple angles, your movement is very limited and you can aim only in 45-degree increments. And, at any one time, you can have only two weapons at your disposal.

You have only two control options - keyboard or joypad - and the controls are very confusing. The cursor arrows control movement, but their actions change depending on the camera angle: left and right movement keys suddenly become left-turn and right-turn keys. Bizarre.

Gameplay takes place in (would you believe) a tiny 320x240 screen (that's quarter-screen, folks). Expanding to full screen simply enlarges the pixels. This is the only game I've played where the manual states: "Preferably play the game on a small monitor." The graphics are proportionately poor. Dying soldiers leave little circular pools of red paint and explosions are tiny translucent yellow/blue balls. One animation of an about-to-be-rescued hostage, jumping enthusiastically up and down, was reminiscent of my Apple II version of Choplifter. Pretty cool 15 years ago, pretty weak now.

Besides human-looking soldiers and nine droids, you'll encounter numerous other animated objects, including floating whelks and blue clouds. But you don't know whether to shoot, pick up, or ignore them. There is no explanation anywhere as to their purpose.

With all the hype this game has encountered, you'd expect something worth critiquing. But as it stands, Machine Hunter isn't even worth picking up from the discount rack. 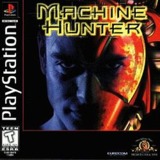 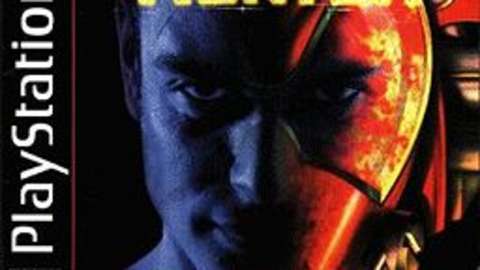 Machine Hunter still can't compete with the majority of games out there.