A picture is worth a thousand words in this charming point-and-click adventure.

Machinarium's robotic hero is one of the year's finest leading men: He's dedicated, resourceful, and oozes charisma--yet he doesn't speak a word of dialogue. Nor, for that matter, does anyone else in this traditional point-and-click adventure game. Yet in spite of their vocal silence, Machinarium's mechanical inhabitants communicate more effectively than many of the wordiest game characters, using often hysterical gestures and diagrams within speech bubbles to clearly establish their roles in the world. These delights are further enhanced by enchanting visuals and quirky music that immediately provide a sense of place and personality. Moreover, the puzzles that provide the bulk of the gameplay are excellent, and a few of the brainteasers are tough and clever enough to tax the noggins of even the most seasoned adventurers. In spite of a few missteps, such as a painful action-oriented sequence near its conclusion, Machinarium is a great game that makes an age-old genre feel fresh again.

It won't take you long to be drawn in by Machinarium's beautiful 2D visuals. This world of rusting robots and intricate machines is drawn in clever, quirky strokes. A hulking guard coddles his inoperable teddy bear, seeking out batteries for his friend in front of an orange-hued industrial landscape. Cobwebs stretch between winding pipes that lead to no discernible place and have no discernible purpose. Aging brown buildings are weathered by jagged cracks and dull stains while distant leaning towers covered with rivets and antennas spew smoke into the atmosphere. A wonderful clinkety-clank soundtrack enhances the mechanical mood with its alternately tuneful and discordant strains. This isn't really a place you'd want to live, but it's a place you believe robots would want to live.

And what characters these robots are--expressing devotion, boredom, and frustration through deft animations and cute-but-sparse sound effects. One woman (if she could be called that) protects herself with an umbrella while wheezing into a whistle, apparently seeking an unseen taxi. A trio of street musicians toots and bangs on the corner, much to the dismay of the unhappy tenant in the apartment above. And then there's your own character, an unlikely hero seeking to be reunited with his one true love. It's a simple journey, but the spirited protagonist is so lovable that every step closer to your goal feels like a big triumph. A few wonderful visual touches add extra poignancy. For example, in one section, the screen goes dark and you see only a few prison cells, which makes the scene feel claustrophobic. Machinarium often manipulates your monitor's real estate in this manner, and not only is this trick effective, but it also makes the fuller environments that follow feel even more spacious.

As with most point-and-click adventures, your progress is hindered by a number of brain-busting puzzles, but Machinarium tweaks conventions enough to be fun even for adventure veterans. You can't just hunt for pixels, but you must maneuver your bot within reach of the interactive object. Environments aren't loaded with interactive knickknacks and your movement is limited, so this is rarely a chore. Most object-based puzzles are clever and intuitive. For example, you'll obtain a metallic mutt for the umbrella lady by moving a floating oil drum near the dog and luring it over with a few drops of the stuff. (Well, there's more to it than that, but you should figure out the specifics on your own!) Sometimes you'll have a few items in your inventory at once, but it never gets cluttered: Once you're done with an object, your good-natured pal just tosses it aside in an adorably dismissive gesture. You'll also encounter some shape-manipulation and pattern-recognition puzzles, with a few tough ones toward the end of the game. Your gray matter is in for a good workout, yet while many of these puzzles are difficult, most can be worked out with clear thinking and a little patience.

If you do run into trouble, Machinarium's excellent two-tiered hint system is there to lend a helping hand. You can click a button and get a quick illustrated hint of your general objective--or you can click another button to view an entire diagram outlining the steps you need to take. In order to view the more elaborate hint, however, you have to endure a little side-scrolling shooter minigame. The minigame isn't awful, but it isn't very good either, though you might see it as an appropriate way of discouraging you from seeking frequent assistance. A few other arcade-style minigames are unavoidable, including an annoying and overly long sequence in which you maneuver a minuscule avatar around a seemingly endless maze of 2D corridors, shooting at other little specks. Machinarium's other flaws are much less significant. For instance, once your rambunctious robot is on the move, he'll continue to move until he's reached the next predesignated stop. And the Flash technology powering the game leads to a few minor annoyances as well, such as the game not filling your entire screen.

Those quibbles are small blemishes in an inventive and endearing adventure that will have you rooting for the good guy and sneering at the bullies that have caused him so much trouble and heartache. Machinarium, much like its personable protagonist, has a big heart and a plucky attitude that will win you over. Like the best games in the genre, it will excite your eyes and ears, but more importantly, it will stimulate your psyche. 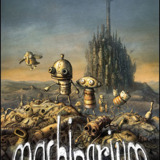