Tons of content and great music make Lumines II a worthy follow-up to the addictive original.

With all of the prelaunch hype touting the power of the PSP, few would have guessed that the handheld's best game would be a puzzle game; but that's just what happened. Q Entertainment didn't take any chances with the original's formula in the sequel and instead focused on adding more of everything--skins, music, and play modes. Lumines II is a game that feels fresh for the first few hours, but once the newness of the music wears off, it's pretty much the same as Lumines. It's still one of the best puzzle games of the year, but it's hard not to wish that the game played at least somewhat differently.

Anyone who played the original game will easily be able to pick up where they left off, but for those who missed out on the original, here's the gist. Colored boxes that are made up of four smaller squares drop from the top of the screen--they can be one solid color or have another color mixed in. It's your job to spin and move blocks to create a single-colored, two-by-two (or larger) block. The blocks are then erased by a vertical bar called the timeline, which sweeps across the screen from left to right in time with the music. The only "special" piece is a flashing square that when used as part of a completed block erases every like-colored square that's chained to that block. And it's game over when the blocks reach the top of the screen. The basic concept is simple, but there's a fair amount of depth to the game, especially if you're aiming for a high score. Big points are earned by adding like-colored squares onto a box that's set to disappear to make combos. Having only one color on the screen at a time earns you a small bonus, while having a completely empty play field nets you 10,000 extra points. A video tutorial and a series of tips help make the game accessible to newcomers, and a new play history grades your ability and details your progress as well as how many hours you've spent playing.

All of the single-player modes from the original game have returned, and other than time attack, each has received at least a minor facelift. You still unlock skins (new music and pieces) by playing through challenge mode, and as was the case last time, the objective is simply to get the highest score (which is no longer capped at 999,999) and play for as long as possible. Challenge mode has been broken into three classes of escalating difficulty (a fourth challenge unlocks when you beat the first three), but other than having different unlockable skins, there wasn't any noticeable difference in the difficulty from one mode to the next. It can still take hours to finish a game in challenge mode, but there are a number of ways to enjoy Lumines II if you've only got a few minutes to spare.

Mission mode is a series of 50 challenges of escalating difficulty. These timed objectives range from clearing the entire screen in a set number of moves to clearing a certain amount of blocks to filling the entire screen with blocks (it's harder than you think). Mission mode is a nice addition, but the difficulty curve is uneven. You'll breeze through a dozen levels, beating many of them in less than 10 seconds, and then find yourself suddenly stuck. Once you manage to beat the level, it's smooth sailing again--until the next random, superchallenging one. Puzzle mode plays just as it did in the first game, though it has been expanded to include more than 100 puzzles. In puzzle mode, you're shown a picture and given a time limit before your game starts, and you must replicate that pattern in-game. It's both challenging and fun to manipulate the pieces in an effort to make apples, flamingos, airplanes, fountains, snakes, and more. Versus mode returns mostly untouched, though its difficulty appears to have been balanced so that it's friendlier to beginners. In versus CPU mode, the screen is split in half, and whoever clears blocks the fastest gradually gains control of the other part of the screen. The end goal is to take over the entire screen. Duel mode is the same as versus CPU mode, but it's played against another person via ad hoc. Players will need their own copy to play duel mode, but it's possible to send a demo to a friend using the game-sharing feature. You can create custom playlists of skins and even share them wirelessly to another PSP.

But wait, there's more. Budding musicians can create their own beats with the included sequencer. This lets you take the basic elements (drums, guitar, keyboards, bass, and the like) of four songs and create new songs, which can be played during custom skin mode. The interface isn't overly user-friendly, and you're not likely to win any awards for your tunes, but if you're patient, it's possible to make some catchy music that you can share with your friends. And finally, a demo of Q Entertainment's other recent game, Every Extend Extra, is also included on the disc.

Lumines proved that puzzle games don't necessarily have to have a boring presentation, and Lumines II has even more style. Everything from the menus to the customizable heads-up display is sleeker, although the lack of an autosave feature (which was in the original game) is an odd oversight. For the uninitiated, the game collectively refers to the backgrounds, pieces, and music as skins. There are 60 skins in the game, many of which are new, but there are some holdovers from the original. New or old, they all look great, and there are some really cool designs for both the pieces and the backgrounds. Most of the time, the background will be some sort of animated art, but there are also music videos that play in the background during some of the popular licensed songs. You're not really going to have time to watch them while you play, so these videos don't add a whole lot to the presentation. Another reason not to like them is because there's a brief pause in the action each time a music video loads, and though you can't see it, the timeline keeps moving--suddenly appearing in the middle of the screen when the video starts and likely messing up any combo you may have had.

With the gameplay and music being woven so deftly together, sound is once again a huge part of the Lumines experience. Hardcore Lumines fans may scoff at the addition of big-name artists to what had been a previously eclectic mix of Japanese artists, but there's no doubt the well-rounded soundtrack will appeal to a larger audience this time around. Gwen Stefani, Black Eyed Peas, Beck, Fatboy Slim, Missy Elliott, The Chemical Brothers, and Hoobastank are a few of the new artists who compose the robust soundtrack. There are a few repeat songs from the original game as well as a new song by Tetsuya Mizuguchi, so the flavor of the soundtrack isn't totally different. All of the songs/skins end and move on to the next song/skin as soon as you've erased enough blocks, but the skins with licensed songs end as soon as the song is over--they don't loop endlessly. As always, moving pieces create their own sounds that mix seamlessly with the background music.

All of the new content and good-as-ever gameplay make Lumines II a great game and one that's easy to recommend if you haven't played the original. There are lots of great songs and a number of ways to keep busy for hours on end. However, the new play modes might not hold much value for veterans of the series, some of whom might also be turned off by the Americanized soundtrack. But even if it doesn't feel particularly fresh, Lumines II is a great game and one of the best games to hit the PSP this year. 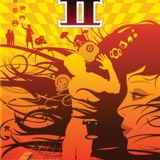