Almost seven years after it was released alongside the PSP, Lumines is still a must-have game for the system. Its uncomplicated Tetris-style gameplay makes it fun to play for both short and extended periods of time, and its stylish presentation still serves as something of a showpiece for what the aging handheld has to offer. Now, Lumines: Electronic Symphony has been released alongside the PlayStation Vita, and while it isn't nearly as new and exciting as the first game was, it makes some noticeable improvements to the formula and might very well be the one Vita launch game that you're still playing a year or two from now.

As in Lumines, your goal in Electronic Symphony is to rotate falling squares comprising four small blocks so that blocks of the same color join to form shapes measuring at least two by two. You move blocks with the D-pad and rotate them with face buttons, unless you're a masochist, in which case you can try to do everything with the relatively imprecise touch screen. These blocks don't disappear immediately, but rather when they're hit by the timeline--a vertical line that moves horizontally across the screen at varying speeds. This line, along with the fact that hanging blocks succumb to the pull of gravity, is what sets the game apart from other Tetris-style offerings. You have to pay attention to the timeline at all times, because as it sweeps from left to right it changes the landscape of the playing field that you're dropping squares onto. Mistime a drop by even a fraction of a second, and you might end up with a pile of mismatched squares instead of points.

The primary mode of play in Lumines: Electronic Symphony, titled Voyage, introduces new audio and visual themes (known as skins) as you progress. All of them look great, and the 30-plus tracks from the likes of The Chemical Brothers, LCD Soundsystem, Underworld, and Goldfrapp belong on your MP3 player if you have a penchant for electronic music. At first blush you could be forgiven for thinking that the skin changes are purely aesthetic; there are still only two different colors of blocks, and they still fall in the same square formations, after all. The skins' impact on gameplay quickly becomes apparent, though, when you realize that both the falling blocks and the timeline move at different speeds. Slow-falling squares combined with a speedy timeline means you have plenty of time to line up blocks that disappear almost as quickly as you can drop them. Conversely, fast-falling squares and a tardy timeline can quickly see the screen filling up as even blocks that you've matched linger for a time.

One of the great things about the never-ending Voyage mode is that, as you play, skins don't get more challenging in a linear fashion. They appear in the same order every time you play, but the action ebbs and flows in a satisfying way as challenging skins that make it tough to keep your screen clear are eventually followed by more forgiving ones that afford you an opportunity to clean up. Also helping your cause are a couple of special block types that show up occasionally.

Chain blocks cause all touching blocks of the same color to disappear the next time the timeline passes by, while shuffle blocks randomize the colors of every block in the formation that they touch--even if said formation fills almost the entire screen. Chain blocks are always a welcome sight because they provide a one-two punch on the playing field; drop one so that it connects with a long string of blocks of one color, and when those disappear you're left with a stack of the other color. Shuffle blocks can seem like a hindrance at times because they mess up areas that you feel you've organized in some fashion. They're easily disposed of if you leave an area clear to drop them into, though, and can save you in a pinch because dropping one often matches blocks that would otherwise remain mismatched and buried.

In addition to the chain and shuffle blocks that randomly appear in your squares, you can use the touch screen to trigger a special ability that recharges over time. These abilities are a welcome addition to the Lumines formula because they add an extra layer of strategy, and which of the several abilities you have at your disposal is determined by the avatar you choose to represent you onscreen. There are more than 40 different avatars to unlock either by leveling up as you play or by meeting with other players via the Vita's "near" sharing option, but only a handful of different single-player abilities. These include triggering the appearance of chain and shuffle blocks, changing your next three squares to all be single-color, slowing down the speed at which new squares appear, and pausing the timeline temporarily. When choosing an avatar, you also gain access to a multiplayer ability for use in Versus mode.

Where Lumines' Duel mode incorporated an option to play against the AI, Electronic Symphony requires an ad hoc opponent. If you're familiar with the versus play in Lumines, the new abilities are the only noteworthy thing that has changed. The screen is divided in half by a vertical line at the start of the game, and it moves to encroach on the playing area of the player who is losing. As in solo play, the game ends when one player no longer has any space to drop blocks into. Duel mode is frantic fun, and it's sadistically satisfying to hear your opponent groan when he realizes that you've used your ability to randomize the rotation of his blocks, to make one of his blocks near-invisible, or to send an unwanted shuffle block his way.

When you're not playing against a friend or putting a couple of hours into a Voyage session in an attempt to climb online leaderboards, options include timed modes that last for between 30 seconds and five minutes, a challenging Master mode, and custom playlists comprising a random or handpicked selection of skins from the 40-plus that can be unlocked. Since Voyage mode takes such a long time to play and always presents you with skins in the same order, playlists afford you a great way to mix things up and to limit the amount of time you spend playing. Master mode is also a good addition, since it doesn't take nearly as long to get difficult as Voyage.

The original game's Puzzle mode, in which you were challenged to create various shapes from the falling blocks, is unfortunately absent, but Lumines: Electronic Symphony is still very much a complete package. The asking price of $39.99 ($35.99 if you download it) might seem steep, but months from now when you're looking to enjoy 30 seconds or multiple hours at a time with your Vita, Lumines: Electronic Symphony will still have you covered. 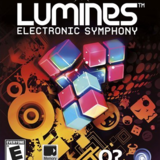 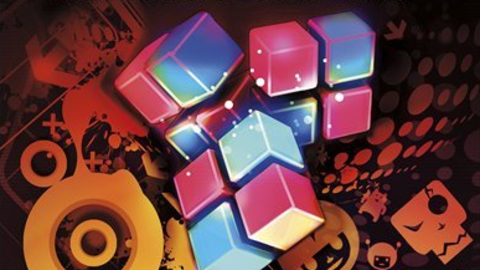 Lumines is a game for the PlayStation Vita from Ubisoft.