I ain't afraid of no ghosts.

Luigi's Mansion may directly trace its lineage to the Super Mario franchise, but the series is in many ways its complete antithesis. Whereas Mario's adventures whisk players through vibrant worlds laden with pits, lava pools, and other platforming challenges to overcome, Luigi's have been decidedly more methodical, trading the colorful backdrops of his brother's titles for cobwebbed corridors, and emphasizing careful observation over quick reflex. Luigi's Mansion 3 very much continues this tradition, but the tightly crafted set pieces developer Next Level Games has assembled here illustrate just how compelling this style of gameplay remains, and the new mechanics and freer structure make it perhaps the best installment in the series yet.

Once again, Mario's cowardly brother finds himself unwittingly thrust into the role of hero when Mario, Princess Peach, and her entourage of Toad attendants are kidnapped shortly after the group checks into the ominously named Last Resort hotel. Luigi narrowly avoids this same fate by escaping down a laundry chute and landing in the hotel's basement, where he soon reunites with eccentric paranormal researcher Professor E. Gadd and his trusty Poltergust--a modified vacuum cleaner that can suck up ghosts.

The Poltergust serves as the basis of Luigi's entire range of actions in Luigi's Mansion 3. Despite being a more adept jumper than his brother, Luigi doesn't display any of his leaping prowess here; the lanky plumber's feet are planted firmly to the floor throughout nearly the entire adventure. His primary means of interacting with the environment instead comes through the Poltergust's numerous abilities. On top of being able to suck up debris and blow out air, the vacuum comes equipped with both the Strobulb and Dark-Light from Luigi's Mansion: Dark Moon; the former releases a blinding flash of light that can stun ghosts and activate certain switches, while the latter reveals invisible objects and enemies.

Complementing these is a handful of satisfying new abilities. The Suction Shot fires a plunger that can attach to certain objects, allowing Luigi to swing or pull them, while the Burst releases a gust of air that knocks crowds of enemies back and lifts the plumber momentarily off the ground. The most vital addition to Luigi's ghost-hunting repertoire, however, is the ability to slam ghosts. Latch onto a spectre with the Poltergust and you'll charge up a meter that lets you bash them repeatedly on the floor, inflicting extra damage.

Not only do these new abilities feel like natural extensions of Luigi's skill set, they inject a welcome bit of action to the gameplay. They also open up new approaches for taking on adversaries. In past games, ghost encounters typically amounted to first stunning them with your flashlight, then vacuuming them up. You'll still rely primarily on the Strobulb to control crowds of enemies, but now you can slam one ghost into any others that are nearby, damaging multiple foes at once. Later encounters will force you to use the other skills at your disposal as well, making battles consistently enjoyable.

Outside of combat, the Poltergust's most significant new feature is the ability to summon Gooigi--a gooey doppelganger of Luigi originally introduced in the 3DS remake of the first game. Gooigi's role has been expanded here, opening up a new range of puzzles to overcome. The goopy clone retains the same abilities as Luigi, but his gelatinous body can slip through fences, grates, and even spike traps, allowing him to bypass seemingly insurmountable obstacles and discover hidden corners of the hotel. Moreover, certain enemies and objects will be much too large for Luigi to swing on his own, requiring the extra set of hands Gooigi provides, and a number of rooms feature pressure-sensitive tiles that one character will need to stand on while the other vacuums up whatever emerges.

Once you unlock Gooigi, you can play through almost the entire adventure cooperatively with another nearby player, and the game lends itself well to either co-op or solo play. Many of the puzzles you'll encounter require Luigi and Gooigi to work in tandem, which makes exploring the hotel with a friend enjoyable. Solo players, meanwhile, can swap between Luigi and Gooigi by pressing the right thumbstick in, allowing you to quickly take control of either character as the situation demands. You'll never encounter a scenario that cannot be overcome solo, although a handful of bosses and puzzles are clearly designed with a second player in mind. While these are still very much beatable on your own, they are a bit more cumbersome when you're juggling control of both characters.

Much like Dark Moon, Luigi's Mansion 3 makes clever use of your small clutch of abilities. Every puzzle you encounter while exploring the Last Resort can be surmounted by observing your surroundings and employing some combination of these skills, although it certainly won't seem that way for many. You'll frequently come across puzzles that offer no obvious solution, which makes finally sussing out the answer all the more satisfying. The game rarely reuses ideas as well, so each challenge you face feels fresh.

On top of that, the hotel houses a wealth of collectibles to find. Coins, pearls, bars of gold, and other valuables are copiously tucked away in treasure chests, drawers, toilets, and any other compartment you can imagine, encouraging you to poke around. Most enticing, however, are the six unique gems on each floor. Many of these are deviously hidden, and you'll need to study your surroundings carefully to figure out how to uncover them. Even the gems that are in plain sight will often require an outside-the-box solution before you can actually collect them, which makes taking the time to explore every nook and cranny of the building constantly rewarding.

Each floor of the Last Resort acts as its own self-contained level and adheres to a different theme, running the gamut from typical hotel amenities like restaurants and gift shops to more outlandish lodgings such as medieval castles and ancient Egyptian pyramids. Despite these disparate themes, the floors all feel of a piece, and the variety keeps the adventure pleasantly surprising throughout. Gaining access to a new floor is always a delight because you never quite know what to expect when the elevator door opens. Moreover, the game eschews the mission-based nature of Dark Moon in favor of a much looser structure. Barring a few instances, most of which occur early on in the adventure, Luigi won't be recalled to E. Gadd's lab after completing objectives, allowing you to explore the hotel at your leisure.

When you first begin your quest, however, you'll only have access to the basement and main lobby; to reach the rest of the hotel, you'll need to track down elevator buttons to the other floors, and these are typically in the possession of a boss ghost. These boss encounters are another highlight; each one has a distinct personality that's charmingly conveyed through their animations, and you'll come across all manner of characters, from a film director melodramatically mourning the loss of his beloved director's cone to a skittish security guard who is just as startle-prone as Luigi. These personalities help elevate the bosses above the rather forgettable ones from Dark Moon, and each battle makes use of Luigi's skill set in clever ways.

The controls, however, will occasionally get in your way. To shine the Dark-Light, you need to hold the X button, which means you can't move the right analog stick to adjust your aim while using that ability. The game compensates for this by letting you aim using motion controls, but it isn't a proper replacement for dual analog; you're limited to aiming up and down, making it an inelegant solution. The Suction Shot suffers from a similar issue; you'll often need to hold the button down to line up your shots, making it likewise difficult to aim, particularly during high-pressure situations. None of these issues are severe enough to detract significantly from the game, but they are an occasional annoyance.

Rounding out the package are two dedicated multiplayer modes: ScareScraper and ScreamPark. The former plays out much as it did in Dark Moon, challenging up to eight players--either locally or online--to complete successive floors of a tower within a strict time limit. Each floor has a specific objective, such as defeating every ghost or collecting a certain amount of money, and you'll need to work together to clear the challenges. ScreamPark, meanwhile, is a local-only party mode in which two teams compete against each other in mini-games. There are three different mini-games to choose from; one has teams vying to suck up the most ghosts within the time limit, while another has them floating around a pool, collecting coins while avoiding mines. Both modes can be fun diversions, particularly ScareScraper, which straddles the line between competitive and cooperative. As they stand, however, they're comparatively shallow and lack the same appeal as the main game.

But while the multiplayer modes may not hold your attention for long, the strength of the Luigi's Mansion series has always stemmed from the satisfaction of exploring its carefully constructed settings, and in that regard Luigi's Mansion 3 certainly succeeds. The game may not radically diverge from the series' formula, but it offers up another meticulously crafted set of challenges to overcome while smoothing out some of the issues that held Dark Moon back, and the sense of accomplishment you feel when you clear a particularly head-scratching obstacle is just as potent now as the first time Luigi unwillingly strapped a vacuum to his back and stepped into a haunted mansion. 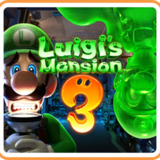 Kevin's stay at the Last Resort lasted approximately 20 hours, and he completed the main story, collected most of the hidden gems, and played a couple of hours of ScareScraper and ScreamPark. Review code was provided by the publisher.