Beneath a star-filled sky.

The storyteller's art involves more than simply repeating tall tales of old, or reciting scripts that have been committed to memory. A true spinner of yarns is a conduit that filters a story through his own experience, drawing you in not just through the epic he relates, but also through the embellishments he gilds it with. He knows how to tell a legendary fable as if it's the first time you've heard it.

Lost Constellation's great accomplishment is that it captures the improvisatory spirit of the bard and the jester. Characters in games don't often speak like people actually speak--they speak like writers write. In this ephemeral 2D adventure, the characters aren't people; they are cats and mice, snowmen and alligators. Yet they speak as if they are individuals unto themselves, rather than exposition machines. What they say might baffle you: "I'm not following this line of logic," exclaims the game's heroine to a mouse that serves as the gatekeeper of a mysterious totem. Later, the young cat that stands in as the game's audience asks the narrator--her grandfather--what this story is about. "What do you want it to be about?" he responds. Whether or not you find that reply helpful or unhelpful depends on how important it is to you that a tale provides all the answers and dutifully states its meaning.

As the alligator astronomer that stars in Lost Constellation, you move to and fro as you might in an old-fashioned platformer, but this is a PC adventure of the classic sort, gating narrative developments behind light puzzles and exploratory tableaus. Interactions are simple: you gather snowballs and throw them, build and customize charming snowmen, and speak with the delightful denizens of the woods you travel through. The simplicity complements the story, stressing the graceful snippets of dialogue with object collection and chime-ringing. Lost Constellation is not so much about "what," however, than it is about "where" and who."

The "where" is a forest of wintry beauty. The trees grow towards the heaven as you watch, rising from their current infinity to an even greater infinity, if such a thing were possible. You enter a coffin salesman's hut, and the background peels away, leaving you to bask in the warmth of the tiny cottage. It's such a small but meaningful detail, the way the falling snow dissipates and you are left with the orange glow of a cast iron stove and the comforting presence of a pipe-smoking fox resting in a rather cozy coffin. The "who" is a funny and diverse bunch, from a royal troupe seeking audience with a spirit, to a rat forced to confront her own wickedness. Lost Constellation's surreal soul, however, emanates from those snowpeople you build, who come to house the lost spirits of the wood.

The question of "why" still lingers when Lost Constellation draws to a close, but by then, it has fulfilled its purpose admirably, not just as a brief adventure, but as a companion piece to the developer's forthcoming Night in the Woods, a more expansive game set in the same universe. The game's clearest and most human sentiment accompanies that finale, at which point it muses on how we seek connections to the things we least understand--a suitable conviction for a story with such free-associative ideas and dreamlike tangents. To play Lost Constellation is to wrap yourself in a fleece blanket and shelter yourself from the cold. 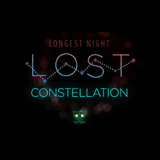 Kevin VanOrd has played Lost Constellation three times now, each time playing out just a little differently than before. He calls his favorite snowman "Binky." It's a pet name.