Lords of the Realm II Review

The Middle Ages were tough times and similarly, Lords of the Realm II is a tough game.

Forget about chivalrous kings and courtly honor: The Middle Ages sucked. If you didn't come down with a severe case of the Black Death in those days, then your poor, starving, plague-ridden village was being ransacked by some neighboring tyrant. Sierra tries to capture the bleak reality of the bloody feudal struggles during these so-called "dark ages" in their recent turn-based/real-time strategy title Lords of the Realm II. Devout fans of strategy greats hoped that this would combine the best of both Warcraft II and Civilization II, and while it falls just short of being that ultimate game, Lords II still provides a challenging and entertaining experience for strategy enthusiasts. And challenging it is: The Middle Ages were tough times and similarly, Lords of the Realm II is a tough game.

The premise of Lords of the Realm II: The king has been axed, and you, along with other feudal lords, are vying to capture neighboring fiefdoms and gain rule over the land. The majority of the game takes place in a three-quarter perspective (like Civilization II), showing your village, surrounding industries (like mining, weapons production, woodcutting, and agriculture), and traders, who travel in and out of your territory periodically. The first part of a typical campaign is normally spent carefully managing agricultural resources and adjusting tax rates to foster more peasant growth and build up a decent economy. After a few seasons (each turn advances you a season) when industrial growth becomes more of a concern, you can simply adjust a slider that controls your farming vs. industry priority. This all sounds pretty straightforward in ink (or electrons, whatever…), but your peasants are fairly temperamental. They get ticked off by things like slight tax increases, food shortages, over-conscripting, and being overworked. A "happiness" figure located on the toolbar indicates the status of your village, and if your villagers aren't feeling hunky-dory about the way you're governing, they'll revolt at the drop of a hat.

Once you have a decent number of (happy) peasants, you can start conscripting them to build up armies. Different soldier classes - peasants, knights, archers, pikemen, and mercenaries - all become available depending on the storehouse of weapons you possess. At some point, you have to deal with the other power-hungry lords. These guys are real cocky bastards, and their continual, snotty provocations just make you want to "get medieval" on them all the more. Guide your troops over to meet an opposing lord's army or allow him to try to attack a garrisoned castle, and the screen automatically switches to real-time combat mode. Music gets a little more dramatic and, as happens in Warcraft, you select troops, point and click on enemies, and the chain mail flies. If you're defending a castle, you can be really cruel, dumping sizzling oil on enemies and perforating them with arrows while they try to break through your castle walls with siege towers, catapults, and battering rams.

I'll have to admit, it's pretty exciting to defend a besieged castle. But on the whole, the real-time combat in Lords of the Realm II could have been improved greatly. Your men are frustratingly difficult to maneuver, stumbling around at times as though they'd just had a frontal lobotomy. Also, just like a field of pre-adolescent soccer players, the combat field gets a little too crowded too easily.

Although the economic model of Lords I has been simplified to incorporate these action elements, it still adds a new spin to and makes more challenging a title which, for the most part, would have just been a resource management game. Some die-hard war strategy gamers may find that the new style of Lords II is too compromising and that the game spreads itself thin by trying to accomplish too much. But if you're looking for a new Civ-style strategy game that adds a new dimension to its gameplay, you may want to give Lords of the Realm II a try. 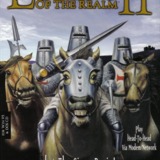