Loop Hero combines familiar mechanics in unfamiliar ways, producing an exhilarating and tactical roguelite that you'll struggle to put down.

For all its automated systems, Loop Hero can be incredibly stressful. Battles play out without any input from you, navigation loops over a predetermined path, and resources are collected for you, but that doesn't mean you can take your eyes off the battlefield for even a second. This captivating mix of familiar genres demands constant attention, testing your ability to think well into the future when making your moves. It's a riveting balance of risk and reward wrapped in a deviously challenging roguelite that will tempt you into pushing forward for just one more round.

Loop Hero is a distinct mish-mash of multiple genre ideas, none of which influence gameplay enough to easily classify the overall gameplay experience. Loop Hero is primarily a run-based role-playing game in which you indirectly control a hero through procedurally generated loops. Instead of controlling the hero's movements, you mainly control what they encounter by placing objects on the loop that create the world--things like cemeteries that can spawn skeletons, villages that can heal you, or swamps that generate nasty mosquitos. These are provided by cards that you draw from a limited deck which you can edit between runs, letting you curate each one to a degree. And while your hero automatically navigates in circles and resolves fights with enemies without any inputs, you also manage their inventory carefully to deal with the increasing challenges that each new round trip brings.

Ultimately, Loop Hero challenges you to balance risk and reward by keenly considering all the options your current cards give you to make your next loop challenging, but not deadly. Each run is an opportunity to gather resources you use to expand your camp in the hub world, unlocking new cards, classes, and abilities to use on subsequent runs. Enemies drop specific resources that you'll need to further progress outside of each expedition, giving you incentives to place multiple groves for wild, mutated dogs or dimly lit houses that can spawn bloodthirsty vampires on tiles around them. With each new addition to the loop, you're also extending the time it takes to make a trip around it, which directly affects spawn rates of enemies that are tied to a persistent day-night cycle. While a tile might seem harmless when it's only adding one enemy to the loop every day, it can become dangerous when the route is stuffed to the point where an entire group might be waiting the next time you make it around again.

Balancing the placement and density of enemies on the loop is what will inform each of your moves, pushing your understanding of how each of these small singular systems play out over extended stretches of time. Each battle rewards you with additional cards and loot, forcing you to recalculate the right balance of risk that fits with your current capabilities and the current toughness of enemies. Overestimating your ability is punishing--if you die in battle, you only get to keep a third of the resources you've gathered during that run. You're able to flee at any point during a loop if you're not engaged in battle, but you only take everything you've earned if you do so at the single campfire on the path. And because you're ultimately in control of the overall difficulty and balance of each run, even brutal failures still feel fair--and clutch victories are all the more satisfying when you successfully risk it all on one more loop.

A lot of Loop Hero's fun stems from the vague descriptions of cards and figuring out how different cards can play off each other. Meadows, which heal you at the start of each day, can be placed around a loop to give you additional health at the start of each new day. Place it next to any existing structure, however, and this effect is buffed. Not all effects are beneficial to your hero, either. A group of Mountains placed together will turn into a Peak, which gives you a nice resource bonus but also starts spawning enemy harpies you'll have to contend with. Villages offer you small quests and healing outside of your campfire but also attract thieves who will steal equipment off your back while in a fight.

Seeing any given loop fill up with the consequences of your actions while exploring the potential possibilities of new combinations keeps each run interesting. It can be somewhat frustrating, however, when you can't figure out how or why an effect occurred. While some cards will explicitly state what their properties are, it can be difficult to decipher why the placement of one card in a particular slot had the effect it did. Other times the consequences of your actions only become apparent when you face a new enemy on the loop, for example, making it difficult to track when and where those consequences came from. The ASCII-like art style used for enemy sprites on the loop itself is partly to blame for this, with the tiny icons and limited animations often easy to overlook until you actually get into the battle and see an unfamiliar enemy as battles play out automatically in a Final Fantasy-like style.

Also providing some variety are a handful of classes you can choose from at the beginning of each run, with unique equipment for each that alters your physical and magical attributes. The standard warrior will let you equip a range of items including swords, shields, and armor, while both the rogue and necromancer introduce additional complexity to the standard formula. The rogue can equip two weapons and boots instead of a shield but gathers loot in a bag that can only be accessed once you pass through a campfire; this forces you to commit to what you have in your inventory and what you have equipped for each loop, while also overwhelming you with new loot at the end of it. The necromancer, by contrast, doesn't allow you to use any weapons but instead gives you the ability to summon increasingly powerful skeletons to do battle for you. Items like amulets increase a magic shield that protects your far more limited maximum health, while grimoires and rings help you increase both the quality and total possible number of summons you can muster.

The loot you gather during a run is specific to the class you play but comes in thick and fast most of the time, pushing you to make quick decisions about what to keep. Your inventory space is limited, with new items pushing out old ones and scrapping them for resources. Any item you unequip is similarly destroyed, forcing you to be careful when you want to make a switch. Each class also comes with inherent passive abilities (the rogue starts with life steal, for example) that can help guide your dynamic builds. Just like the cards dealt to you, the effectiveness of a run is entirely down to how quickly you can adapt to the loot that you find, which in turn feeds into the decisions you must make regarding the complexity of the loop you're constructing.

You obtain these new classes and additional cards by expanding the survivor camp outside of your run-based expeditions. Each new structure requires numerous resources to build but rewards you with permanent upgrades and equipment that can help you with each new run. While you're still getting adjusted to the balance between risk and reward during your runs, this progress can feel incredibly slow. The resource requirement for new buildings is steep enough that even successful runs where you managed to flee without losing anything might not be enough to make any progress back at camp. This is meant to motivate you to flee runs rather than push too far and die, but without the ability to make a difference to your hero or the cards you bring into each expedition, it is easy to feel like you're just spinning your wheels for a few hours. Once you settle into Loop Hero's cadence, and especially after you construct some of the most basic structures, this frustration eases up and forward progress is more regular and rewarding, but it's a pity it takes some grinding to get to that point.

The camp also acts as the main hub for Loop Hero's story progression. An omnipotent villain has managed to wipe away the memory of all existence from every living creature on earth, with only your hero able to recall some parts at a time. This premise allows for some surprisingly sharp and often witty writing, giving a new spin to the idea of what it means to be a hero and who a hero might be fighting for. An early exchange with a harpy encapsulates this idea well, with the foe questioning the hero as to why they would help them recreate the world as it was when it can just be reformed into something more kind to monsters. You don't play an active role in how these conversations or the overall narrative path play out, but Loop Hero's story, as light as it is, does manage to carve out some poignant moments that break up the consistently run-based gameplay nicely.

You'll have to battle numerous bosses at the end of each act to see it through, however, which epitomizes how all of Loop Hero's mechanics need to be carefully considered before challenging them. As you play cards during a run, a boss meter fills up, with the big bad of each act spawning at your campfire when it's completed. This locks you into a climatic yet automated fight where every decision you've made during a particular run is put to the test. You can do nothing but watch your hero duke it out with an extremely powerful foe, grinning at every evasion or counter attack or wincing when a heavy blow carves through what you thought was a solid defense. Despite being completely passive, these moments are exhilarating. Even if you don't manage to win (and you will fail many times before you overcome each), the encounter teaches you a little more about how to build your hero and construct the loop around them for this one, final encounter.

It's these moments that make the hours of looping before worth it, as you watch your kitted-out hero land the final blow on an enemy that was once wiping the floor with your mismanaged builds. The thrill of learning in Loop Hero is the driving force of its procedural gameplay, with each small discovery and minute change in approach producing outcomes you might not have imagined. Its opening hours are a punishing hurdle to overcome, but once you've found the rhythm of Loop Hero, you won't want to break from its beat. 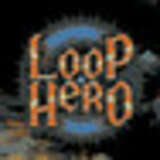 Alessandro cycled through loops like each one was his last across 15 hours with Loop Hero. He took a liking to the Necromancer because he prefers not to get his hands dirty.