Loons: The Fight for Fame Review

On top of its technical demerits, the game fails to capture the essence of the vicious slapstick comedy that makes the Looney Tunes cast of characters so endearing.

Watching old Looney Tunes cartoons, it can be easy to question the validity of all the media scapegoating that the likes of games such as Doom or Grand Theft Auto III have suffered. Anvils, sticks of TNT, big black bulbous bombs, and severe physical trauma are all as central to the Warner Bros. brand of comedy as the characters themselves. Now, Warthog has created an arena-based fighting game on the premise of all this cartoony violence. Really, it's a pretty solid concept that could have potentially made for some absurdly over-the-top action, but unfortunately Loons gets mired in the execution, and virtually every aspect of the gameplay is fumbled.

The story behind Loons is paper-thin. Rocky and Mugsy, the mismatched pair of gangsters that have been bumping heads with Bugs Bunny since the '30s, have cooked up a scheme: They plan on running a film studio into the ground by making terribly expensive terrible movies and then buying up all the worthless studio stock for pennies on the dollar. The game never explains how these two have gotten into a position to spend the studio's money, or how they plan to turn a profit once the studio tanks, but of course, this is of little consequence. After hiring Yosemite Sam as their director, Rocky and Mugsy prepare a series of screen tests designed to single out the worst actor they can find to be the star of their bomb, and the four candidates for the job are Bugs Bunny, Daffy Duck, Sylvester the Cat, and the Tasmanian Devil. And so begins Loons: The Fight for Fame.

Bearing a perfunctory resemblance to Capcom's Power Stone series, Loons pits four characters against each other in a multitiered arena. Lying around these arenas you'll find tons of "gizmos," which can be used to attack your opponents to greater effect. Many of the gizmos come straight out of the ACME catalog, including a spring-loaded boxing glove and falling anvils. The obvious objective here is to blow away your opponents, but Loons also puts heavy stock in its star power system. Each character has a star meter, which functions much like a conventional life meter. A round will start with the star meter at half full, and it's up to you to fill it. This can be done by picking up scripts you find lying around the set, as well as by activating props at the director's cue, like a comically tiny motorcycle, a whirligig, or a giant laser.

Once your star meter is full, you can activate a minigame, most of which are crazy takes on familiar games like the arcade classic Space Invaders or Snake--friend to cell phone users everywhere. All of this business with the star meter is necessary only in the single-player fight-for-fame mode, and only because the game will often require you to activate a certain number of props or minigames before you can advance to the next level. The combat system basically comes down to mashing on the A button to attack your opponents, and the enemy AI is so thickheaded, usually it's not even necessary to pick up a gizmo to win in the single-player game. The collision detection is downright lousy, making a simple task like hopping up a series of crates a joyless frustration. The physics system on a whole is just a mess, and it's not uncommon to see characters standing in the middle of thin air or getting snagged on a piece of the environment. In fact, in the very first level it's possible to get stuck behind a door indefinitely. The game also offers multiplayer and arcade modes, where up to four players can fight it out in any arenas or minigames you've unlocked in the single-player game, though you'll probably find that playing them once is enough.

It would seem most appropriate for Bugs, Daffy, and the other Looney Tunes characters to be fleshed out using the popular cel-shading effect, but the execution of this effect in Loons simply doesn't do them justice. The rough, uncertain lines that define the characters are not only technically unimpressive, but they betray the clean look in which they are usually rendered. The coarse presentation of the characters is made worse by some shoddy self-shadowing. The arenas in which you'll do battle are usually vaguely reminiscent of an old Looney Tunes setup, including an old Western saloon, a moon base, and a rocky desert canyon location that may or may not be Albuquerque. While the quality of the voice work found in Loons would most likely do Mel Blanc proud, the dialogue itself is miles away from funny, and the limited amount of dialogue drives it further from funny and closer to annoying. The music that accompanies the onscreen mayhem is decent cartoony filler, though it's nowhere near the level of the work of classic Merrie Melodies musician Carl Stalling.

Loons: The Fight for Fame essentially falls short on all of its aspirations. The combat is overly simplistic, the cel-shaded presentation is unattractive and unrefined, and the game is brimming with collision-detection and physics bugs. On top of its technical demerits, the game fails to capture the essence of the vicious slapstick comedy that makes the Looney Tunes cast of characters so endearing. 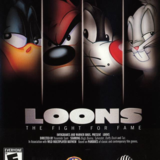 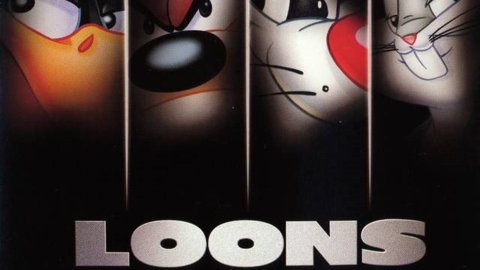 Loons: The Fight for Fame

On top of its technical demerits, the game fails to capture the essence of the vicious slapstick comedy that makes the Looney Tunes cast of characters so endearing.

5.2
Sign In to rate Loons: The Fight for Fame