Looney Tunes Racing has a way to go before it can stack up to the big boys.

A few months ago, Infogrames released Wacky Races, a kart-style racing game based upon the Hanna-Barbera cartoon series of the same name. It is a beautiful racer that redefines the way people view handheld racing games. In a sort of déjà vu, Infogrames has used the same engine for its Looney Tunes franchise racer, Looney Tunes Racing. The result is a game that is many steps backward in terms of depth, longevity, and challenge but amply appropriate for the younger generation of game players.

Unlike Wacky Races, Looney Tunes Racing is light on selection. There are two game modes: arcade and championship. In the championship mode, you'll compete for money and recognition in three progressively tougher cup challenges. Each cup challenge features three different courses, with such fun names as the Arizona Desert, Porky's Farm, and Duck Dodgers' City. Success in one cup unlocks the next and fortifies your bank account with a healthy sum of money. Earnings are somewhat important in this game, because if you intend to play as anyone other than Bugs, Lola, Daffy, or Wile E. Coyote, you're going to have to hire them first. In addition to being able to purchase two additional tracks and some bonus items, Foghorn Leghorn, Yosemite Sam, Marvin Martian, and the Tazmanian Devil all enter the game once you fork over some cash. Remove the cup competitions from the game, and you get its arcade mode. Similar to Wacky Races, the game still has no link-cable support, but a battery backup at least eliminates the hassle of dealing with passwords.

If you've played any GBC racing games, be it Top Gear Pocket or V-Rally, you're no doubt used to Pole Position-style gameplay. You know the kind: car in the middle of the track, course weaving around the car, and the background stays put. Wacky Races used hills, turns, and water hazards to minimize this effect. Looney Tunes makes a similar attempt but for some reason comes up short. Hills are too short, turns are pathetically loose, and the maximum number of water hazards per level is two. The game does a much better job with its implementation of track obstacles, however, some of which are alive. Assuming the developer made the game this light on purpose, children will be delighted to see valkyries and gossamer beasts rampaging toward them, even if the course designs aren't terribly complex.

Looney Tunes Racing's handling mechanics are also much more relaxed than those found in Wacky Races. While each character has its own different speed and turning attributes, the ability to stay centered on the course and skid through turns plays a greater role in race success than actual driving prowess or power-up use. Should you get into a bind, though, it's nice to know that there are a few power-up items you can use to even the score. In all, there are ten power-up items: homing pies, rocket boosts, portable holes, angry beehives, lightning strikes, anvils, mallets, electromagnets, invincibility helmets, and Acme tunneling equipment. Before each race, you can purchase two such items to place in your inventory, while Acme boxes - spread throughout each course - lend further opportunities to augment your payload. With a tap of the B button, you can unleash these weapons on unsuspecting foes.

In terms of presentation, Looney Tunes Racing manages to keep pace with Wacky Races. Backgrounds are lush and colorful, with plenty of cartoon-inspired buildings and cityscapes dotting the landscape. Roadside visuals, such as cacti, cattle, and signage, zoom by at a rapid pace. There are no in-race terrain changes like those in Wacky Races, but the tradeoff is a solid frame rate that leaves no room for the pesky flicker and slowdown common in other Game Boy Color racing games. Bugs and company are drawn in a superdeformed style that's whimsically faithful to their small-screen animated shorts. As for the soundtrack, Cute Warner Bros.-inspired music and a few cookie-cutter sound effects are about all you get.

Looney Tunes Racing has a way to go before it can stack up to the big boys. However, it would be the perfect game to use to introduce younger gamers to the joy of portable kart racing. In every category, be it gameplay, sound, or visuals, the game turns in a performance aimed solidly at children. As such, you may wish to occupy yourself with Wacky Races or Woody Woodpecker Racing, but your children would probably welcome a chance to give Looney Tunes Racing a spin. 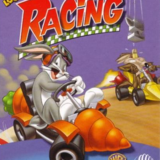 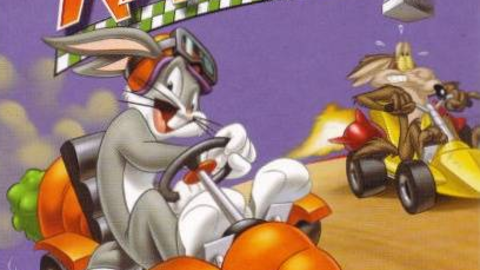 Looney Tunes Racing has a way to go before it can stack up to the big boys.