While it captures the grand feel of the Games, London 2012's dull campaign stops it from taking home the gold.

The stadia have been built, the athletes are prepared, and London's public transport system has been put into disarray, which can mean only mean one thing: it's time for the Olympic Games. Of course, unless you're at the peak of your physical ability, you won't be competing for your very own gold medal this year. Enter London 2012: The Official Video Game of the Olympic Games, which attempts to recreate the Olympic experience for mere mortals. While it doesn't have any lasting appeal, London 2012's well thought-out mini-games are mostly entertaining and, at the very least, more reliant on skill and careful timing than mindless button mashing.

In the single-player Olympic mode, you choose from over thirty national teams and attempt to lead them to glory in the Games. Two events are played each day and there are two rounds: qualifiers and finals. The tutorials are brief and informative, but there's no opportunity to really practice the events before you take part in the qualifiers. If you get through, then you repeat the event, but this time with the chance to win medals. Such repetition is dull, especially as you have to pick from a prescribed list of events, and can't skip the ones you don't like. Events mode is much better, because it allows you to create and save playlists of the your favourite events instead.

It's clear from the outset that London 2012 is not a good single-player game. Most of the events can be completed quickly, but the sheer amount of games on offer and the effort it takes to complete one Olympic career don't leave you clambering to start another. It doesn't help that the Olympics are really all about competition, and without someone other than the AI to compete against, the experience falls flat. The game does support PlayStation Move and a party play mode, though, which is its saving grace. The social aspects are akin to games such as Kinect Sports, and there's more satisfaction to be had when you beat a friend or family member to the gold, rather than a faceless AI.

The Move controls, featured only in minigames that are separate from Olympic mode, are a lot easier to pick up and play than the regular controls, and in many cases are a vast improvement. Take for example, skeet and 25m rapid-fire pistol shooting. The Move is a natural fit for these shooting events, being easier and faster to aim by pointing, rather than than by nudging a reticule with the analogue stick. Kayaking also benefits from the Move controls, with the paddling action much easier to mimic with motion. Throwing events are fun to play for a while, and mimicking throwing the javelin feels more realistic than pressing buttons, even if it lacks the precision timing you can obtain when using a regular controller.

London 2012 doesn't scrimp on quantity when it comes to the main, controller-compatible games it offers, but some of the 30-odd games are worse than others. Trampoline, vault and diving are nothing more than quicktime events, and scoring can be infuriating, as the judge's temperament seems to vary from round to round. On the other hand, track and field events offer more enjoyment. While there are some shared mechanics between all of these events, there are subtle differences that make each one its own challenge. Button mashing is kept to a minimum in London 2012, and instead carefully timed flicks of the analogue sticks control how far or fast your athlete will go. Mastering each technique takes practice. Sadly, there's little opportunity to do this in the single player campaign, which rushes you through tutorials, and is more intent on teaching you which buttons to press, rather than when you should press them.

There's a variety of swimming events to try out too, and they all use the same control scheme. These events are reliant on you pushing the analogue sticks forward and backwards to build a decent rhythm. Do so successfully and you'll easily win the race; fall out of your rhythm just a little bit and things get tricky. These events are unforgiving, and don't offer much in the way of help if you mess up one of your strokes. The most fun to be had is with Archery. You have to take into account wind speed, direction, gravity and a strict twenty-second time limit, which makes obtaining a high score rewarding.

There's a running contextual commentary over all the events, and for the most part it's weak, consisting of basic and uninspired phrases. There is some great crowd interaction, though, which makes events all the more exciting, and hearing the raucous rumble of the crowd makes crossing the finish line all the sweeter. For those not content with just winning gold medals, there are opportunities to crack both world and Olympic records too. You can also take the action online, where you pick a country to compete for and post your best scores to a global leaderboard. Competing for your country makes things satisfyingly competitive, even for events like kayaking where you aren't directly challenging opponents.

The presentation is slick, thanks to the bright artwork and realistic athletes. Their animations in particular are very well done, with subtle movements helping you to recognise when to execute that perfect shot or jump. The branding of the Olympics is of course infused everywhere. The logo and font are used at every available opportunity, and the menus and titles bear the garish neon colours from the marketing. Venues such as the ExCeL, Lord's Cricket Ground and the Olympic Stadium have been cheerfully recreated in the game, and the opening ceremony over the skies of London helps to set the scene and build excitement for the real thing. It's a real shame that so much effort has been put into creating the look and feel of the Games, and yet there are no likenesses of actual athletes.

While London 2012: The Official Video Game of the Olympic Games may have a ridiculously long title, it doesn't have such a long lasting appeal. An emphasis on its dull single-player campaign, rather than the more entertaining party play mode, fails to make the most of the competitive spirit of the Olympics. There's some fun to be had with friends, but even then the uneven quality of its minigames means that as soon as the Olympics are over, London 2012 will lose its allure. 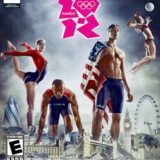 London 2012 - The Official Video Game of the Olympic Games
Follow