This iteration delivers all the fast-paced, intellectually challenging action that has made Lode Runner such an enduring classic.

When Lode Runner first debuted on home computers in 1983, its compelling mix of fast-paced action and puzzling level design made it an addictive hit that was unlike anything that had come before. More than 25 years later, there's still nothing else quite like Lode Runner, and the new version on the Xbox Live Arcade proves that the unique gameplay is every bit as engaging today as it was then. This release also tosses in some terrific co-op content that makes this gold-hunting adventure as enjoyable for a twosome as it is for solo runners.

As the eponymous hero, you're on a quest for gold, and the game's main Journey mode has 80 increasingly challenging two-dimensional levels that you run around while attempting to collect the precious metal, all the while avoiding the rapid, relentless pursuit of robots, monks, abominable snowmen, and other villains. You can run left or right, climb ladders, and move hand over hand along ropes and other overhead objects. You can't jump, but you do have one trick up your sleeve, which, more than anything else, defines Lode Runner and sets it apart from other platformers.

That's the blasting mechanic. You have a handy blaster that lets you destroy certain types of blocks, provided that they're beneath you to your left or right. The tricky level designs require you to make smart use of your blaster to access all the gold, and you can also use it to create traps for any pursuing enemies. Your enemies move along predictable patterns, but that doesn't mean they're stupid. On the contrary, they're very good at cornering you, and their patterns are tough to outsmart, so you'll rarely feel safe. Indeed, their relentless pursuit can be nerve-wracking, and one touch from an enemy means instant death. But if you blast a block and then an enemy runs into that spot, he'll fall into it, letting you safely run across his head and collect any gold he may have been carrying. You'll need to be careful and plan ahead, though, because it's easy for you to end up trapping yourself. The combination of platforming, which requires you to think fast and move fast to stay ahead of your pursuers, and puzzling level design makes Lode Runner that rare game that's as mentally engaging as it is thrilling. And while the nuances of Lode Runner's unique gameplay carry with them a learning curve, the tutorials do a fine job of bringing newcomers up to speed on the fundamentals.

Lode Runner is a challenging game, and it's a better one for it. If you die at any point on a level, all the gold is restored to the environment and you must once again collect all of it and then make your way to the exit. You'll need to learn from your mistakes--and you will make mistakes--to get through the levels. It can certainly lead to some frustration, but it's also largely this sense of getting better, of learning to use the layout of each level to your advantage, that makes progressing so rewarding. If you're looking for a breezy platformer, though, look elsewhere. Lode Runner is tough and requires focus.

In addition to the standard Journey mode, there's a fun Puzzle mode that does away with the enemies, instead creating a battle between your wits and some particularly tricky environments. There are 50 puzzles in all, and many of them are brilliant head-scratchers. On the other end of the spectrum, there's a much more fast-paced mode called Hang On, in which you run around one of eight levels, trying to collect as much gold as possible as you're pursued by an ever-increasing number of enemies. It's enjoyable for a little while, but the lighter focus on environmental problem-solving makes it less uniquely Lode Runner and, as a result, less engaging.

There are also some great multiplayer offerings that can be played either locally or on Xbox Live. The best two are just co-op variants on the Journey and Puzzle modes, but the level designs are unique to co-op play and are clever in the ways that they require you to coordinate with your partner and work together, standing on each other's head to reach otherwise inaccessible areas, blasting blocks to allow your partner to progress, and the like, making the whole experience play very differently from the single-player modes. Less interesting is a mode called Last Man, in which up to four players compete to be the last surviving player; when touched by an enemy, you become an enemy yourself and join the pursuit for the remaining players. If there's a way to make Lode Runner exciting as a competitive multiplayer experience, this isn't it. This mode is awkward and completely uninteresting, but its inclusion takes nothing away from the strength of the other modes.

The graphics aren't remarkable, but they're sharp and clean. The Lode Runner himself animates smoothly, and the five different environment types, in addition to each having special types of blocks that impact the gameplay a bit, give the game some visual variety as well. The generic music never calls much attention to itself, but some of the sound effects, like the menacing mechanical footfalls of pursuing robots, help pull you into the action.

With 80 levels to the single-player journey, 48 for the co-op journey, and 50 puzzle stages to boot, there's certainly enough to Lode Runner to keep you busy for a while. And like the original game, this version offers a level editor, so you can download new challenges from other players or share your own. Besides the steep 1,200 points asking price, the biggest criticism you can level at Lode Runner is that, for better or for worse (and mostly for better), this is largely Lode Runner as it has always been, so if you think you've had your fill of classic Lode Runner, this game probably won't bring enough new stuff to the table for you. With that said, the core Lode Runner gameplay hasn't aged a bit. Lode Runner on the 360 is a testament to the enduring appeal of this innovative and challenging game. 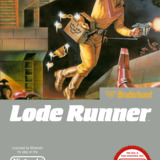