Lock's Quest's intuitive build mode and frantic, engaging battles are great for an action strategy game on the go.

The Internet is chock-full of flash-based games in which you build a fortress and then protect it from invading armies, zombies, or cows. In Lock's Quest, developer 5th Cell has taken the addictive qualities of those games and deepened the experience with strategy and role-playing elements. The result is an exciting and engaging genre-blending game packed with action.

The world of Lock's Quest revolves around source, a mysterious resource that is used by archineers to build defenses and by the evil Lord Agony to fuel clockwork minions. When these minions show up in Lock's peaceful little town, the talented young archineer teams up with an injured soldier to protect the villagers until they can be evacuated. During the siege, Lock loses track of his sister, Emi. With the town lost to the clockworks, Lock sets off on a quest to find his sister and uses his archineer skills to help out where he can. The story is slow to start, but it's generally entertaining and contains a few unexpected twists that will keep you playing.

Each stage is split into two phases: building and battling. During the building phase you're given a couple of minutes to assess the layout of the land and build and repair defenses. Dragging, dropping, and arranging pieces on the map is easy, and the organized interface is responsive, which is good, considering that you'll usually be building in a hurry. Building complex fortresses in less than two minutes is simple for the most part, but there are times when the isometric view makes building difficult. Objects and environments become transparent when you try to place items near them, but on some maps, it's still hard to tell if a piece is flush with the scenery. It's frustrating to be in the heat of battle and find out that the wall you thought was impenetrable has a gap big enough for enemies to waltz through.

Building flaws are just some of the many things that need to be attended to during the hectic battle mode. In addition to repairing fortresses, you'll need to take care of your mission objectives--which can be anything from rescuing hostages to defeating selected enemy encampments--and fight off some of the clockworks in hand-to-hand combat. To engage a clockwork, you simply tap it with the stylus and watch Lock pummel away, and that works about 80 percent of the time. When the screen gets crowded, it gets harder to select the enemy or object you want. In later levels you will build massive fortresses as you fight off hundreds of enemies. Battles are intense and chaotic as you scramble around the map repairing defenses, fighting enemies, and collecting source. Nearly every action has a quick minigame associated with it. Whether it's grinding gears to execute a finishing move or ratcheting levers to repair a broken turret, the battles keep you engaged as you furiously scribble all over the screen.

In most stages, you'll have to go through at least three consecutive build-and-battle phases. A steady stream of new traps and defenses (which you have to assemble with collected scrap from the battlefield) and a wide variety of mission objectives keep the battles fresh. Sometimes you need to defeat every enemy on the map, and other times you have to survive until the timer runs out. The constantly changing objectives keep you on your toes and give Lock's Quest an addictive, "just one more" appeal.

After your first few battles, you'll be introduced to siege mode. In siege mode the view is shifted to the side and you're given control of a turret. You spend the day bombing clockworks and the night purchasing upgrades and special abilities. This mode is simpler than the main build and battle mode; it feels a lot like the dozens of tower defense games on the Internet. It's a nice change of pace, and it serves as a nod to the games that inspired Lock's Quest, but it isn't challenging, and it doesn't offer much customization.

Lock's Quest is a very stylus-intensive game. You can drag the stylus to move Lock or tap a location and watch him run to it. When the screen gets crowded, there are times when you'll tap a badly damaged turret only to have Lock run behind it and stand there, or you'll direct him toward a battle and he'll get stuck in the environment. These problems don't ruin the game, but they occur often enough to be irritating. Other than the random stylus hiccups, the controls are intuitive and make you feel like you have an active role in the action.

Lock's Quest has a fully featured multiplayer mode that's just as much fun as the single-player game; you just need a friend with a second copy of the game to play it. After connecting to another player, you can select your map, the number of rounds, the build and battle time, and more. Your source in multiplayer games funds more than your building materials; you'll also need it to purchase clockwork minions. Each round you'll select a gaggle of bots and choose the route they take into the heart of your enemy's camp. During a battle, the top screen displays your map and one for your opponent, so you can see how your minions are faring against your opponent's defenses. When the round ends, your scores are tallied up, and you're given a chance to tweak or add to your defenses and select different bots. Playing against another person is challenging and adds a bit of unpredictability to the game.

Those who played 5th Cell's last game, Drawn to Life, will notice a few similarities in the visual design of Lock's Quest. Both games feature a vibrant color palette, attractive detailed scenery, and smoothly animated characters. A more mature art style might have suited this game better, but the visuals are great regardless. The game can support a ridiculous number of character sprites and animations on one screen with little to no slowdown. The top screen displays a map of the battlefield and shows you enemy locations as well as defenses that need repair. Many of the objects and environments have square, gridlike designs that help them blend in with the defenses and give the presentation a cohesive look. The music is full of sweeping orchestral tunes in MIDI form. None of the tracks are particularly catchy, but the epic swells and fast-paced battle tracks fit the action well. The sounds consist mostly of satisfying grinding ratchets and metal clanks.

With a lengthy single-player campaign, exciting multiplayer, and addictive gameplay, Lock's Quest has elevated the defense genre high above mere Internet distraction. Those who have spent lazy afternoons clicking through flash-based defense games, as well as those who haven't, would do well to give Lock's Quest a try. 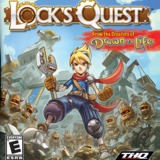 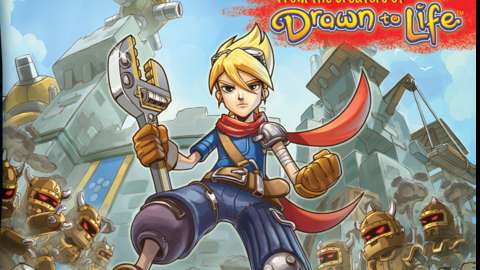 Design forts and defend your seaside village from swarms of invading minions in this arcadey strategy game.