The racing in Little Big Planet Karting is enoyably off the wall, but a poor level editor tutorial saps some of the game's potential.

Sushi roll tires. It's a trio of words not often found together in polite society, and yet Little Big Planet Karting uses such oddities to lure you into its delicious world. As you slide through the cardboard-cutout levels, a homing missile fast on your cupcake tail, it's hard to contain your smile at the ludicrous nature of it all. And yet, despite the charming facade, Sony's mascot racer struggles at times. Odd physics interrupt your freewheeling fun, and an impenetrable tutorial ensures that only the most dedicated designers can create something worthwhile with the powerful creation tools. Even with the roadblocks, Little Big Planet Karting still combines genuine thrills with well-realized aesthetics.

Saccharine charm defines Karting, and the best way to experience this infectious sweetness is to head off to the Story mode. Here, you're greeted by affable narrator Stephen Fry, who not only mentions the miscreants who trouble this colorful world, but teaches you how to control your nifty ride. It takes no more than a lap or two to get a handle on the responsive controls. Boosting requires you to drift through turns until your wheels burst into flames. The longer you slide, the faster you fly, so there's a delicate balance between trying to milk that last bit of nitro and getting back to the bump-and-grind action. Thankfully, stick wiggling doesn't factor in, so those who enjoy snaking will find no way to cheat the system here.

Aside from boosting, there are a few different maneuvers that you make periodic use of. Grappling onto perches lets you swing over treacherous pits, while spinning in midair gives a helpful boost once you touch back on solid ground. These techniques make up only a small fraction of the racing action, but if you want to consistently nab the checkered flag, you have to master your item usage. Missiles, land mines, and other handy items can be collected while you cruise around courses, and these can be used to hamper your enemies or give yourself an advantage. The most creative of these resembles a fast-forward button. This moves your kart at warp speed, screen flickering as if you're scanning a VHS tape, which is a clever visual technique that's also a handy speed boost.

Almost every item doubles as an offensive attack and a defensive shield, which is both a blessing and a curse. Hitting an enemy with an offensive strike means you can move up one spot in the rankings, but if you're the recipient of such aggression, you can drop from first to sixth place (or worse) in the blink of an eye. Because of how punishing Karting is to those who are attacked, it's smarter to hang on to your item if you're in the top half of the group. That way, you can defend yourself from your devious opponents, and you can still gain position by sliding through turns with speed and power. It's an unfortunate balance that favors the cautious. Weapons often add a layer of volatility in kart racers, but here the balance is shifted so strongly to the defensive side that much of that anything-goes mentality has been evaporated.

Jostling with your opponents presents new problems. Unpredictable physics mean your kart doesn't always react like you'd expect when you get slammed into unexpectedly. For instance, one of the power-ups is a novelty-size boxing glove. Sackboy rides upon this like a tiny boxer, punching those in the way when he speeds on by. You might think that being slammed from behind would make you fly forward in an out-of-control manner, but you're just as likely to pop slowly in the air, your momentum inexplicably halted. This kind of behavior is unfortunately the rule rather than the exception. You so often grind to a halt when another driver slams into you that you start to fear even the slightest contact, as if everyone else is a leper, which feels downright lonely for those who enjoy throwing their weight around.

The myriad quirks lessen the appeal of the go-karting action, though excellent track design keeps you focused on the road ahead. Shortcuts abound for those with eagle vision, so there's a learning curve while you figure out which line is best for your abilities. Collectibles litter courses, giving you small objectives while racing that keep you invested in the action. Point bubbles are merely for leaderboard rankings (though snagging a group in a perfect powerslide is eminently enjoyable), so the real prizes are the presents hidden in out-of-the-way places. These provide stickers, kart parts, and other tools in the editor, so it's well worth exploring the breadth of these cleverly designed courses to nab every package.

Much of the appeal also comes from the aesthetics. Karting draws heavily on the cardboard-cutout style from the Sackboy-starring platformers, and the arts-and-crafts atmosphere is immediately welcoming. Whether you're cruising through swampy locales or racing through a futuristic city, every stage in the extensive story mode has an enticing visual theme of its own. The music feeds into these artistic pleasures. Songs ranging from tribal chants to '50s-style "world of tomorrow" pieces ensure there's plenty of diversity, and you'll be nodding your head along to the beats while guiding Sackboy across the finish line.

There's more than just driving on offer in Karting's story mode. Battle arenas pit you against your stitched foes in an anything-goes test of your physical might. These types of face-offs are standard in karting games, and though it's still fun to pelt your enemies with missiles while avoiding their retaliatory attacks, there's little to distinguish this mode from the glut of similar experiences that preceded it. Other diversions are more interesting. A top-down competition echoes R.C. Pro Am's pint-size challenges, and a side-scrolling level has more in common with an endless runner than a traditional race-to-the-finish racing game. Although these extracurricular activities are entertaining, their role is more to show off what you can create with the extensive creation tools than to provide incredible content on their own.

And once you have a taste for what Karting is capable of, you can try your hand at creating something that rivals the best tracks from the developer. Just be prepared to pour hours into learning how to use the editor first. Unfortunately, the tutorial does a terrible job of walking you through the process of designing your own tracks. Each of the more than 50 included lessons is a noninteractive video. So instead of trying out the various features on your own, you're forced to watch while the game slowly lays out what everything does. Sitting through every video takes more than 90 minutes, and good luck retaining everything you've watched once you set in on your own tracks. Considering games are about doing, rather than watching, there's no excuse for such a poor tutorial.

If you do learn how to use the editor, a wealth of possibilities open up to you. Developer-made examples show levels that are far different from the standard racing and battle fare that populates the campaign. Everything from tower defense to tile-flipping match games are possible, so those who are properly motivated can concoct tons of different game types. However, don't expect these forays into alternate genres to supply the thrills of a stand-alone game. It's certainly novel being able to play a first-person shooter in what was designed as a kart racer, but the controls and weapon design are far below even standards set by the most rudimentary entries in recent memory. And don't get too excited by the prospect of boat races, given that the water physics are closer to a wet roadway than an undulating ocean. Still, being able to design far-reaching genres shows how powerful this tool is, but it's unclear if the non-racing levels will mature to more than simple curios.

Little Big Planet Karting resides in a tricky position. Taken on its own, it's little more than a standard entry in a genre that offers far more enjoyable experiences. It's up to the level editor to separate this game from the pack, then, and the lousy tutorial limits those tools to only the most dedicated designers. At least there are extensive sharing tools to make it easy to play others' creations, opening the door for a wealth of imaginative content. Thankfully, the core racing is exciting, and the lengthy story mode offers a variety of well-designed courses to compete in, so even if the community never takes off, there's still plenty of entertainment to be had. 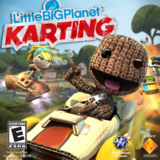