Though it's extremely short, Link's Crossbow Training is a fun shooting game that's good enough to overshadow the faults of the main part of the package, the Wii Zapper.

When Nintendo first released details on the Wii Zapper, people were skeptical as to how the Big N would convince the public to spend their hard-earned cash on what is essentially a plastic shell designed to hold the Wii Remote and Nunchuk. That answer came when it was announced that the Zapper would come bundled with Link's Crossbow Training, a simple yet fun shooting game with a Legend of Zelda theme.

It can be played without it, but Link's Crossbow Training is designed for use with the Wii Zapper. The Zapper itself is just a sturdy piece of white plastic molded to loosely resemble a futuristic gun with two grips. The remote lays flat across the top of the Zapper, and the Nunchuk locks vertically into place on the back. There's even a removable compartment that lets you wind up the Nunchuk's cord so you only have enough wire exposed to connect the Nunchuk to the remote. The trigger is on the front handle. Because it's so far up on the gun it doesn't feel natural, but you get used to it after a short while.

The Zapper can be used with newer games like Resident Evil: Umbrella Chronicles and Medal of Honor Heroes 2, but Nintendo is sweetening the deal with Link to move the peripheral off of store shelves. In the game you play as Link, and you're presented with a total of 27 shooting stages spread over nine levels. Each level contains three stages, and you must earn at least a bronze medal on a stage before you're able to move on to the next one. There are three different types of stages. In target shooting, you must try to shoot the bull's-eye on targets that pop up out of nowhere as quickly as possible. Accuracy is more important than precision here--and really, this is true in all the stages, because as long as you hit the target at all you'll increase your score multiplier. Defender places you under attack by different creatures, some on foot and some that attack from the sky. You use your radar to locate what direction your foes are approaching from and then point the Zapper offscreen in that direction to turn that way. Ranger is the stage that most closely resembles a traditional Zelda game. You're given a set number of enemies to kill (or you must fight a boss), and you move around the level with the analog stick to seek them out before time expires. It's tough to run, look around, and shoot at the same time, but with a little practice it's manageable.

Those are the basics, but there's a lot more going on. You can shoot scarecrows, skulls, pots, signs, and other items scattered across the levels to earn bonus points. Holding down the trigger until your reticle flashes lets you shoot an exploding arrow, which is handy when you're facing an onslaught of skeletons or wolves. Some enemies will flash green; if you shoot them, your crossbow will be able to fire rapidly like an automatic weapon. While speed is a necessity, you'll have to be careful what you shoot. Some targets in target shooting are painted with an X and will deduct points if hit, and you'll also lose points if you shoot creatures you're trying to protect. You can breeze through the game's nine levels in an hour and a half if you're good, but it has that "Just one more try, I know I can do better!" charm to it, so there's a lot of incentive to revisit previously cleared stages to improve your score. There's a multiplayer mode, but because it doesn't support more than one player at a time, you just end up passing the Zapper around trying to best your opponents' scores. A practice mode is also included, but it's just another way to replay stages you've already finished, and you can do this in the score attack mode, so it's essentially worthless.

It's tough to say that the Zapper makes the game better in any way--you can play just fine without it, and you won't really feel like you're holding a crossbow. This has nothing to do with the Zapper itself, but because of the way the Wii senses motion; you have to aim via a reticle that appears onscreen, not like you do with traditional light gun games like Duck Hunt or Time Crisis. There's an option to adjust the height and speed of the aiming cursor, but there's no way to align it. As a result, our gun always seemed to be aiming about three or four inches to the left of where the gun was actually pointed.

It's easy to sum up Link's Crossbow Training's presentation: Twilight Princess. The graphics are essentially the same, and you'll revisit many locations and fight the same enemies from Link's earlier Wii appearance. The only issue with the audio is that the crossbow doesn't sound much like a crossbow, but other than that small complaint, the game sounds fine and you'll enjoy hearing the always-great Zelda music you've come to know and love.

As long as you don't expect more than a short but sweet shooting game, you'll be pleased with what Link's Crossbow Training has to offer. It's good enough that you might find yourself thinking of the Zapper as the bonus pack in. 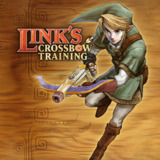