Depending on how you look at it, Lineage II offers either a repetitive grind or a stiff challenge.

NCsoft's fantasy-themed massively multiplayer game, Lineage II: The Chaotic Chronicle, definitely isn't for everyone. While it's certainly pretty to look at, the game focuses primarily on fighting monsters repeatedly to earn enough funds to purchase the exorbitantly priced weapons and armor you need to survive--a decidedly different approach than that of most other recent online role-playing games, which have attempted to alleviate these very issues. This differing emphasis is likely due to the fact that Lineage II was originally developed for the Asian market--so a few things may have been lost in translation.

Like in other games of this sort, Lineage II lets you create a single character before you go out on adventures in a persistent online world, where you fight monsters, gain experience levels, and recover treasures with thousands of other players. Having good gear and items is essential to surviving and prospering in Lineage II, which makes money far more important in this game than in most others of its kind. Unfortunately, while Lineage II was to have featured castle sieges and other elaborate player-versus-player battle systems for powerful and experienced characters, these features aren't yet implemented in the North American version of the game. While some larger guilds of players have staged bigger battles, player-versus-player combat is otherwise very infrequent in Lineage II. The game has a punishing "karma" system in which players that constantly attack other players out of the blue become outlaws who may be counterattacked and actually lose their items, while everyone else can attack outlaws with impunity.

The North American version of Lineage II lets you create characters from one of five main races: elves, dark elves, humans, orcs, and dwarves. With the exception of dwarves (who may become craftsmen, but can begin only as fighters), these races may all start out at level one as fighters or mystics, then later change to more advanced professions once they reach level 20, then again at level 40. Unfortunately, it's a pretty long way just to get to level 20--something you can view as either a challenge or a chore. Probably the latter. This is unfortunate, since high-level characters eventually do get some interesting special abilities. In the early part of your character's life, you can assume various quests from certain characters to earn money and experience rewards, but some of the quests are rather repetitive (you'll need to kill 30 to 50 monsters of a certain type, for instance), and in many cases, these rewards aren't especially big.

Solo battles with monsters aren't especially exciting either; they mostly boil down to either setting your character to auto-attack, then sitting back and watching (while periodically using special abilities), or to casting as many attack spells from as far away as possible until monsters can catch up with you. You then have to deal with the downtime, where you sit and rest for several minutes to recover. Group battles are more interesting, although at this time they seem to offer about as much strategic depth as most other online RPGs. Like in other such games, the best teammates know when to heal the fighters, know when to cast attack spells to finish off wounded monsters, and generally know how much or little fighting or spell-casting they should engage in to make sure you have minimal downtime.

While joining a group of other players is a great way to quickly cut through hordes of monsters and earn lots of experience to gain levels, it's a very poor way to earn "adena," the game's currency. For whatever reason, the amount of money you pick up from higher-level monsters doesn't match up with the rising costs of new weapons and armor. So the most efficient way to play Lineage II seems to be fighting weaker monsters on your own, since you'll sustain fewer injuries per battle and will be able to fight longer without having to stop and rest. "Farming," or grinding away at the same monsters for hours at a time to accrue money, is practically required if you plan to develop your character past level 20. Perhaps as a result of this problematic economy, some unscrupulous players have taken to fashioning money scams, and in the most extreme cases, players have taken to farming and selling adena online for real-life cash--an activity that is against the game's end-user license agreement. NCsoft North America has apparently begun to crack down on these activities at this time.

While Lineage II's current gameplay may not appeal to everyone, it's certainly a game that sounds decent and looks great. The game features an appropriate faux orchestral music score that plays in specific regions of the game, though sound effects are pretty minimal. You'll hear short, subdued audio clips for casting magic spells, and equally subdued voice samples for the game's monsters and your own characters, which will mumble or grunt while fighting or performing the game's few social gestures. You'll also see huge, scenic vistas that include detailed cities and elaborate statuaries as well as highly detailed character models. Lineage II clearly draws inspiration from Japanese animation, and its art design is stylized and consistent. The game's characters look great for what they are, though the female dark elves begin the game with an embarrassing lack of clothing.

Depending on how you look at it, Lineage II offers either a repetitive grind or a stiff challenge. In any case, the game isn't suited for more casual players who may only have time to play for 30 minutes to an hour. But if you're looking to test your mettle at hacking through many, many monsters, Lineage II will definitely give you that much. And perhaps the upcoming large-scale player-versus-player features, like castle sieges, will make the game more exciting. At any rate, it's a fairly stable game that runs with only occasional pockets of lag. So if you're in the market for another online RPG in which you can fight lots of monsters, Lineage II will serve that purpose, especially if you plan to wait around for the game's upcoming features, which will be unveiled in subsequent, free downloadable episodes called "chronicles." But if you're looking for a game that offers more content, better group options, and less of a grind, you should look elsewhere, at least for now. 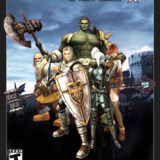