A mostly successful operation with a couple of unsightly scars.

LifeSigns: Surgical Unit is like a rather bold hybrid of Phoenix Wright and Trauma Center. You might call it Drama Center, or Phoenix Wright: Surgeon at Hospital. To wit, not only is most of the game spent conversing with other characters, but you must also occasionally convince them to see things your way by presenting pieces of evidence from your medical record, which is nearly identical to the psyche-lock mechanic from Phoenix Wright. However, the writing quality in LifeSigns is a little worse than what you'd find in the courtroom. Then there are the operations, which are "Trauma Center lite" and occur a couple of times per episode, of which there are five total. Sounds dismal, right? Don't be too hasty. LifeSigns is still a pretty good game, like Phoenix Wright with slightly worse dialogue and more involved gameplay.

And it's weird--really weird. The game begins during a confusing dream in which you, a hospital intern named Tendo, are sitting under a cherry-blossom tree with your boss, the androgynous Suzu-Sensei. The impression that she might really be a he is highlighted by the absurd jingle bell she wears on a collar around her neck, which at once indicates that she might be hiding an Adam's apple while ironically resembling one itself. As she strokes your chin and cherry blossoms fall, she claims "It's time I taught you all about men and women... I'm going to give you your first lesson right now," and the music turns to a porno funk track. From there, everyone at the hospital shows up, the woman turns into your father, and suddenly they all think you were trying to get it on with him, as the music changes to a circus tune. Someone says "This is oyster season, so delicious," to which your character says, "That's...stupid."

And that is your introduction to the world of LifeSigns! It's a terrible start, but the actual game settles into a more down-to-earth (and less stupid) routine in which you help patients and get fought over by all the female characters. It's pretty entertaining, mostly because Tendo comports himself with the kind of calm confidence of a person with really big feet, while at the same time seeming dorky and vulnerable. Lines like this one are also fun: "You inherited my genes, don't you think you have a responsibility to inherit my will?" Yikes. That comes from your father, a researcher at the hospital who looks like an aged Teen Wolf. He has a Beethoven hairdo, wears a white version of Dracula's tux, and has eyebrows that extend at least four inches off of each side of his head. And they're spiky.

But for all of its sexual innuendos and anime eccentricity, the storytelling in LifeSigns occasionally flatlines. During the parts where you must convince characters to see things your way, you can fail and the game will still go on. For instance, at one point you must convince a father that his daughter loves him before she succumbs to stonefish venom. If you fail, the entire narrative thread between the father and daughter, which has been building throughout the chapter, dies, while the little girl magically recovers with no explanation. You'll feel ripped off, and compelled to reload and play the heart battle until you win.

That's no picnic, either, because the pieces of evidence you must present are by no means intuitive or rational. You're usually reduced to algorithmically going through every one until you stumble on the beach ball of revelation. ("This beach ball reminds me of my childhood! That makes me agree with you!") Although it shares that stumbling block with Phoenix Wright, it avoids others. For example, you'll rarely have to wander from location to location looking for the one piece of evidence or dialog trigger that will let you advance. In fact, there's very little scene searching, and all of it is easy. Likewise, it's usually pretty obvious where to go next, and who to talk to.

You'll eventually (and literally) talk your way into an operation. When someone is hurt, you ask them questions about their condition until they start repeating themselves. That's when you take the stethoscope to them. Their suffering face then goes to the top screen, and their uncovered body goes to the bottom screen, where you can rub it, stethoscope it, or just stare at it.

The idea is to identify a set number of symptoms, which Tendo will use to make a diagnosis. The reality is creepy and lame. Your first patient is a young woman with a hot body that can't fit entirely on the bottom screen. So you have to scroll up and down to prod and ogle effectively, like you're looking at a DS centerfold. The next patient makes you feel even more depraved: a little girl in a school uniform. Even worse, her last symptom is nearly impossible to find. It's on her wrist (pervert), and by the time you go online and figure that out, you will hate playing doctor. The problem is that you must find that last symptom, or the game cannot go on, and yet the only hints are misleading. There needs to be a mechanism in place that leads you closer to the answer the longer it takes you to find it, and we don't mean GameFAQs--although that certainly helps.

Once you finally make your diagnosis, the operation begins. Unlike Trauma Center, you never have to choose which instrument to use, and every operation is broken up step-by-step. It's like playing through a series of short, stylus-centric minigames rather than one giant body puzzle. What's helpful is that you can hold a shoulder button to get a guiding arrow that shows you the gist of what you should be doing, whether it's the line of an incision you need to make, or the places in a skull you need to drill through. The operations are fun and make creative use of the stylus and touch screen, and represent better gameplay than anything seen in a Phoenix Wright game or similar adventure.

Best yet, a performance in an operation can affect the plot, just like a heart battle. In some cases, you can get the happiest ending to a chapter only if you race through one operation and quickly get to another. Unlike the heart battles, this gives you something real and challenging to shoot (or slice) for, and the consequences are usually more heartrending if you fail.

The presentation is mostly fine, given that the characters are well drawn. However, there are complications. At one point, a fruit truck overturns and you have to play a fruit-collecting minigame. Never mind that you're cleaning up after a fruit-truck accident ("That's...stupid"), the text formatting in this and other mini-game sequences is worse than a spam email. You feel as if your DS is getting a virus just looking at it. On top of that, anytime anyone in the game speaks, it's accompanied by the "tika-tika-tika" sound that should've stayed in the '80s, from whence it came. The music is mostly poorly produced, although when things get serious in real life, you may catch yourself humming the tune that indicates things are getting serious in the game. That's the sign of a good song.

LifeSigns: Surgical Unit is a surprisingly good game. The main character is likeable, the other characters are suitably interesting, the surgical gameplay is a success, and some of the branching paths are cool. It does stumble in a few areas, but it is a suitable adventure for the Nintendo DS, and an operation worth undergoing. 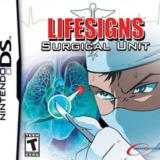 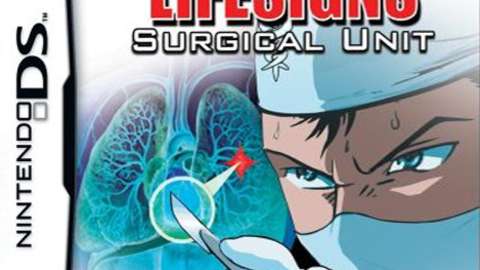 Live the exciting life of a young, motivated doctor in this simulation game where you will find out what it is like to examine, diagnose and operate on patients.