Plan on dying a lot in Life Goes On. Not because the side-scrolling puzzle-platformer is particularly difficult--though it has its fair share of punishing late-game levels--but because its minion-like protagonists regularly fall victim to environmental traps of the spinning blade, spiked stick, and fire-spewing variety.

The game's heroes--tiny brave knights--continually meet their maker, sacrificing themselves so their sword-wielding cohorts can capture the sparkling chalice illuminating each level's end point. Of course, many games, from Pikmin to Patapon, put you in command of lemming-like characters that are prepared to gasp their last breath for the greater good. Life Goes On, however, pushes the concept of "taking one for the team" to new levels, not just encouraging you to accept collateral damage, but requiring you to cause these casualties to complete its challenges.

Seconds after you fire up the game, your first knight is impaled on a bed of spikes; his fresh corpse is then immediately used like a makeshift stepping stone for a newly spawned hero. The self-sacrifice is jarring at first, because willfully throwing yourself onto a sharpened stake goes against the self-preservation skills we've been mastering since those pesky Space Invaders first blew up our blocky ship. But suicide soon becomes second nature when you discover that the quickest path to success is paved with many a dead guy and gal.

Life Goes On's early puzzles ease you in, maybe tasking you with jumping into a spinning saw blade before lifelessly falling onto a pressure plate that provides safe passage for your next knight. Things get clever quickly though, and you're soon stacking corpses like cordwood to coordinate and manage a variety of elements and factors that keep each level's Holy Grail-like prize out of reach. In addition to the aforementioned obstacles and traps, the little human sacrifices encounter swinging pendulums, seesaws, ramps, conveyor belts, lava lakes, and little monsters that fall into a deep slumber upon popping knights in their maws like peanuts. In addition, morbid fun is delivered via cannons that must be carefully aimed before firing their flesh-and-bone bullets into a grisly death trap.

While intentionally mutilating the clueless minions is great fun, solving Life Goes On's devious stages isn't as simple as just unceremoniously impaling, freezing, and incinerating these knights in shining fodder, er, armor. An especially clever touch is the inclusion of checkpoint-like spawn points; once reached, these glowing blue orbs become your next place to manufacture new knights. Things get tricky, however, when puzzles force you to reactivate previously used spawn points, or conversely, to avoid them altogether for fear of triggering them. Thankfully, Life Goes On gives you full control over your character, so you're never trying to corral an auto-walking avatar like in similar games.

On top of crushing the long-established convention that checkpoints equal permanent progress, the game tracks your time and the number of knights killed after each stage. Mercifully, Life Goes On doesn't put a limit on either, but both provide a nice bar for high-score chasers and achievement hunters to measure themselves against.

A handful of levels are more frustrating than fun, and a few puzzle elements are recycled more than you'd want, but Life Goes On mostly keeps the challenge balanced and the progress well paced. New brain-benders--and fresh ways to solve them--are introduced frequently, but on a gradual learning curve, while the controls, which require just two simple inputs, are super responsive; even performing precision jumps, the bane of many a platformer, is effortless.

Things get tricky, however, when puzzles force you to reactivate previously used spawn points or task you with avoiding them altogether for fear of triggering them.

The game's greatest asset, though, is its sadistic sense of humor. Sporting a pretty presentation--complete with slick lighting, shadowing, and particle trickery--and packed with personality, the macabre concept comes off more charming than disturbing. Each knight has a name--such as the Cautious Maiden Pauline Cromwell--which is unceremoniously crossed off a scroll when he or she dies. And each carries a sword despite, apparently, having no idea what to do with it. Other whimsical touches include the single surviving knight pushing all his dead brothers and sisters in a wagon after each stage, as well as messages like "Pattern Recognition Precludes Victory" and "Messiest Victory Since Lemmings" accompanying your end-stage stats.

If you're violently allergic to puzzle games, Life Goes On won't miraculously cure you. But as long as you're open to the idea of having your mind engaged more than your trigger finger, this melon-twister's wicked personality alone might be enough to pull you into its death grip.

View Comments (20)
Back To Top
8
Great
About GameSpot Reviews 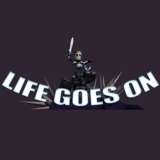 More concerned with completing levels than earning achievements, puzzle-solving veteran Matt Cabral shamelessly sacrificed the lives of hundreds of brave warriors while playing Life Goes On. His Knights of the Round Table membership has since been revoked.