Mindless, repetitive gameplay and a truly atrocious sense of humor help Leisure Suit Larry live up to its name--it's a total bust.

When the Leisure Suit Larry series was revived a few years back in Magna Cum Laude, its bawdy, over-the-top humor and minigame-heavy action seemed geared to capture a new generation of gutter-minded gamers. Leisure Suit Larry: Box Office Bust seems geared to offend, bore, or frustrate anyone who makes the mistake of playing it. The game's shocking sense of humor has all but forsaken wit and cleverness, choosing instead to inundate you with a constant stream of ham-fisted innuendo and spray-and-pray vulgarity (if we say enough foul things, some of it's gotta be funny, right?). Box Office Bust is an intensely adult game, yet the depressingly simple gameplay features more repetition than a children's television show. Despite their simplicity, some of these tasks are actually difficult, thanks to poor platforming and fighting controls. When aggravatingly dull action combines with a desperately perverse sense of humor as they have in Leisure Suit Larry: Box Office Bust, they form an entirely new compound: soul-crushing, mind-poisoning shame.

The star of Box Office Bust is Larry Lovage, the protagonist from Magna Cum Laude and nephew of legendary lounge lizard Larry Laffer. Summoned to his uncle's movie studio to help sniff out a saboteur, the young Larry arrives in a flurry of disgusting and lewd comments. This storm does not abate throughout the whole game, and you are subjected to a wide spectrum of vulgarity, including (but not limited to) scatological jokes, bestiality gags, and esoteric sexual slang. Most of the humor tries to be shocking, but it just ends up feeling like someone spent a few days on the Internet tracking down the nastiest stuff he could, and then transformed it into a script. This isn't to say you won't be shocked; Box Office Bust contains some of the foulest dialogue you'll hear in a game. But most of it is far from entertaining, let alone funny.

This is fitting, however, because most of the game isn't fun. A lot of your time is spent running around movie lots ad nauseam, and hijacking the herky-jerky golf carts doesn't make it more fun, just faster. The detailed environments have a brightly colored cartoony aesthetic befitting a Looney Tunes game, which at least makes the endless running hither and thither a bit more bearable. Unfortunately, any relief the scenery might offer is quickly swept away by one of the many aggravating platforming sections. Larry can jump, double-jump, and wall-jump, and is forced to do so quite often. The controls are floaty, so you'll have to be careful when setting up your jumps lest you send Larry over a ledge to his doom. He also loves to grip onto walls, preparing for a wall jump. More often than not, however, this gecko imitation will mess up your intended jump, and you'll have to try again. The ability to move the camera or switch into first-person view makes jumping puzzles more manageable, but whether or not the camera will respond in a given situation is a crapshoot.

When you're not struggling with this awkward platforming, you may be forced to grapple with the awkward combat. Larry can punch, kick, and block and can perform a magical-pirouette-knockdown attack, but again, the controls aren't responsive. You may easily pirouette your enemies to the ground, or they might gang up on you and make it difficult for you to move. Standing your ground and duking it out is an exercise in frustration, making the best strategy a combination of running around, pirouetting, and kicking your enemies while they're down. There are also some shooting and horse-riding sequences that aspire to mediocrity, and they round out a suite of action elements that are boring at best and infuriating at worst. PC players get a extra layer of frustration to top it all off: any button prompt is delivered as "B1," "B2," etcetera, forcing you to remember exactly how your keys are mapped. Delightful.

There are some mildly entertaining minigames, but they are relatively scarce and come with their own set of problems. After you complete one of the dream sequences in which Larry actually lives the movie he's acting in, you get to direct the final scene. You do this by choosing which of the three cameras to focus on as the scene is acted out. Switching cameras in time with the action and dialogue cues is a neat challenge, and the cameras will often reveal funny happenings just off the set. The problem is, to do really well you have to listen to the dialogue, which is a trial in and of itself. The other notable minigame happens when Larry is trying to seduce one of the many women around the lot. The dialogue here is some of the best (morbidly amusing) and worst (absolutely atrocious) that the game has to offer. Though you can get some good laughs out of these conversations, you'll have to endure some pretty bad stuff. When you are successful (you literally cannot fail), Larry takes the woman back to his skeezy trailer. Congrats?

Not really. Though Box Office Bust wears out the bottom of the dialogue barrel by scraping it so vigorously, it barely scratches the surface of sexual content. All you see during the much-ballyhooed act is the suggestive rocking of Larry's trailer. Not that you'd really want to see what is going on. All the women in the game are downright ugly, even by cartoon sexy-lady standards. Weird eyeballs, disproportionate features, and wonky shading effects wreak havoc on their faces, and many seem to be smuggling overinflated rugby balls beneath their skin, which makes them more freak show than pinup girl. This is bizarrely fitting, though, because the idea of any woman bedding Larry after hearing his obscene come-ons is truly frightening.

Perhaps the greatest peril you'll face when playing Box Office Bust is that, after being so heavily bombarded with such repulsive dialogue, you might find yourself tempted to repeat some of the things Larry says to your friends or family. Don't. Keep your mouth shut and get rid of the game ASAP. Leisure Suit Larry: Box Office Bust is a cesspool of foul language and ugly personalities. The terrible gameplay is stretched thin over hours and hours of redundant, repetitive quests, and it's a bad purchase even at its discount price. The one good thing you could say about Leisure Suit Larry is that it aims high: by relentlessly degrading men and women alike it transcends mere misogyny and insults us all equally and without prejudice. 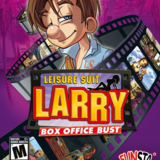 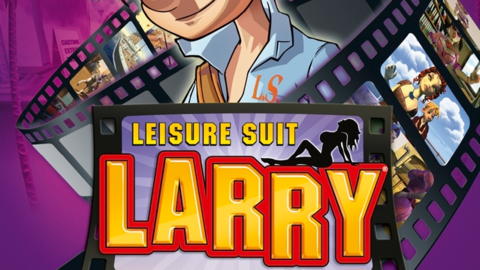 The king of womanizing lounge lizards is back and spending his summer working on a Hollywood movie lot.