The Clone Wars offers an ambitious step up from previous games in the series, but a ton of small issues across the board lead to boredom and frustration.

Lego Star Wars III: The Clone Wars encapsulates the far-reaching breadth of war. Space assaults pit plucky fighter crafts against monstrous battle cruisers; on land, a battalion of rocket-wielding clones take on a six-legged tank; and the entire affair is tied together with a sweeping story that includes dozens of characters from across the universe. This game is absolutely bursting with content, and the variety and scope of battles separates it from its much more restrictive forebearers. But all is not well in this far-away galaxy. Obtuse puzzles and directionless objectives force you to frequently stop your lightsaber-swinging fun to figure out what the heck you have to do next, and an assortment of control quirks have you fighting the game as often as you're fighting the empire. These problems pervade every inch of this epic adventure, overshadowing improvements in other areas. The Clone Wars contains the lighthearted fun the series is known for, but frustration bubbles just below the surface in this uneven sequel.

The theatrical releases of Star Wars have been tapped dry at this point, so The Clone Wars draws its inspiration from television's well. The animated series hasn't ingrained itself into the popular culture quite like the beloved movies, however, which means there's a chance you may not be familiar with the plight of Commander Cody and Wag Too. It's easy enough to understand the gist of this mostly silent story, but a lot of the more esoteric references will be lost on casual fans of the franchise. Although this tale may go over your head at times, your eyes will be captivated nonetheless by the impressive visuals. In a marked step up from previous games in the series, Lego Star Wars III has a unique style all its own that meshes realistic environments with Lego characters and ships. Foliage-dense planets teeming with miniature droids are a sight to behold, and a variety beautiful vistas ensure there's always another piece to this delectable puzzle. The nod toward realism does remove some of the Lego personality that defined the other games in the series, but it's ultimately a worthy trade-off for the eye-catching landscapes throughout this adventure.

There are 18 distinct missions across 13 planets in The Clone Wars, and it can take more than 20 hours to reach the ending credits. Roughly half of the game should be familiar to series veterans. You stroll through tanker ships, desert towns, and all manner of alien environs solving puzzles and cutting down foes with your crew of merry do-gooders. Each character class has its own set of powers--for instance, Jedi can move items with the Force, droids can open locked doors, and clones can grapple up ledges--and you need to switch between them on the fly to solve puzzles and take down enemies. Whacking the environment to get studs is as addictive as ever, and there's a good mix between puzzle solving and combat to ensure you don't get bored. It's a fun, though somewhat predictable, jaunt, but a number of small problems continually interfere with your enjoyment.

The most pressing issue is a lack of clear objectives. The Clone Wars does a poor job of pointing you in the right direction, and lousy visual feedback further hampers your chance for success. For instance, a door may flash red when you shoot it with your blaster, which means the door is destructible, but you have to guess how to blow it up. You may need to keep shooting it with your current character or switch to someone else with a different power, and there's a chance no one in your party can destroy it. Basic explanations of how your actions are affecting the environment are absent in The Clone Wars, and this leads to lost hours while you dumbly explore every option and hope you happen upon a solution. Fundamental problems don't stop there. Using the Force to move objects will give you new appreciation for Luke's struggles on Dagobah. Telepathically maneuvering items is incredibly sloppy, yet the game demands that you be ultraprecise at times. Switching between characters requires you to be standing very close together, which is a serious inconvenience when your party is split up. Respawning enemies are a tiresome annoyance that makes it difficult to focus on the puzzles blocking your path. And targeting is a complete mess. You're just as likely to select an ally as you are the intended object in the background, and this ineptitude turns even breezy diversions into painstaking affairs.

The Clone Wars doesn't confine itself to the narrow corridors of previous games in the series. There are large-scale battles as well, and these offer a vastly different experience. In a nod toward real-time strategy games, during some missions, you need to build up your base to overthrow the invading forces. A dozen or so small camps dot the landscape, and you control each area by clearing out your enemies. Once you've taken over, you build cannons, barracks, shields, and other tactical tools in an attempt to make your army strong enough to declare victory. It's a neat concept that doesn't quite capitalize on its promise. First of all, the levels are so large that it takes forever to jet from one place to another. There are vehicles to speed up the locomotion, but this doesn't help matters. You spend more time schlepping from one place to another than planning assaults, and this leads to tiring monotony. Second, arbitrary camera restrictions limit your power. You need cannons to destroy some of your enemy's structures. Once these big weapons are erected, you hop inside and point where you want to fire. But oftentimes the camera inexplicably snaps back after you've locked on, and the constant pull and tug with your view makes it unnecessarily difficult to launch an offensive volley.

The final part of the Clone Wars experience is the space battles. These are some of the most exhilarating sequences in the game. Lasers flood the screen, enemy ships scream in from all sides, and explosions dot the black sky with red flames. The uplifting score and bombastic sound effects add to the chaos, creating a volatile atmosphere that captures the galactic rush from the movies. But just like every other aspect of this disappointing game, the potential is limited by a number of festering problems. The controls are the biggest culprit here. Movement is jerky and unintuitive, so you're frequently turning in the wrong direction or performing a barrel roll when you just wanted to cruise around like the Jedi stud that you are. And though the vast expanse of space is spread out all around you, you're restricted to moving on a 2D plane (you can't fly higher or lower). It feels stifling to move in such a limited space, and the hokey method of exploring other sections diminishes the immersion. You have to latch on to what looks like a satellite tow service to shoot to another plane, and having to artificially travel to higher parts of space makes you feel like a Jedi baby who still has his training saber.

Cooperative play elevates every part of this adventure to a higher level. The pacing and control issues aren't nearly as damaging with a friend by your side, and two brains can figure out the obtuse puzzles more quickly than one. If you're feeling feisty, you can challenge your friend in head-to-head matches in the RTS mode, and that provides mild entertainment for a little while. Unfortunately, there's no online option, so another good idea is tempered by subpar execution. And that is the theme that carries through every aspect of The Clone Wars. This game is a noteworthy leap in a number of key areas, especially visuals and gameplay diversity, but these positive steps are hindered by archaic design choices and a lack of fine-tuning. The Clone Wars proves that you need more than ambition to shine. 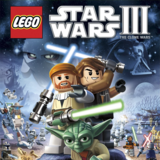