Right around the time of the theatrical release of Star Wars Episode III: Revenge of the Sith, Traveller's Tales released the surprisingly enjoyable Lego Star Wars, a kid-friendly action adventure game that inexplicably rendered the exploits of young Anakin Skywalker and Obi-Wan Kenobi to look as though they were made out of Lego building blocks. It was a curious combination, but it worked because the gameplay was novel enough, the combined nostalgia for Star Wars and Legos was potent, and the experience was delivered with a humorous, lighthearted flair. Lego Star Wars II is an even better package than the original, due almost entirely to the fact that the emotional connection to A New Hope, Empire Strikes Back, and Return of the Jedi is much stronger for most people.

You start out in the Mos Eisley Cantina, which serves as a hub from which you can access all three episodes, as well as a counter where you can purchase extras like cheats and additional playable characters, and a new character creation counter. Initially you'll have access only to A New Hope, though you'll gain access to Empire and Jedi after beating the first chapter. The game hits nearly all of the most memorable sequences from all three films, and it does it all with a goofy sense of humor. Since the game will no doubt attract some hardcore Star Wars fans, it's also worth noting that Lego Star Wars II seems to be taking most of its cues from the original theatrical releases. This means you can expect Han to shoot first, Darth Vader to have eyebrows, and Return of the Jedi to end with the classic "Yub Yub" Ewok song. They're all minor points, but it's the kind of stuff that fans will definitely appreciate.

Lego Star Wars II is still primarily an action adventure game in which you control a group of characters as they blast their way through enemies and do some light puzzle-solving and the occasional platform-jumping. The size of your group expands and contracts regularly, growing as large as seven characters and shrinking down to a mere two characters at times. You control only one character at a time, and you can switch characters easily on the fly. Your artificial intelligence-controlled companions are pretty worthless, save for a few specific scripted sequences. There's also a small loophole where enemies rarely target droid characters, which makes it easy to walk right through certain areas unscathed. Usually, though, the characters you're dragging around are there for a reason, as there are several different classes of characters, each with unique abilities that you'll need to progress. Jedi characters sport lightsabers, can perform double-jumps, and can use their Force powers to manipulate certain objects in the environment. Regular hero characters like Princess Leia and Han Solo pack blasters and can use special grappling hook points to reach areas other characters cannot. C3PO and R2D2 can open special doors and activate certain equipment, and R2 has the added bonus of being able to hover short distances. Short characters like Jawas and Ewoks can access special ducts that lead to otherwise inaccessible areas.

These character classes were all in the original, though they've been tweaked slightly. All nondroid characters are able to assemble random piles of Legos into usable devices, something that originally only Jedi were capable of; many blaster-wielding characters will now auto-dodge incoming blaster fire; and most characters now have unique melee attacks--it's great to watch Chewie rip a stormtrooper's arms right out of their sockets or to see Lando pull off a rising dragon punch as if he were Ryu. Not only do all these refinements make non-Jedi characters more useful, they also lend the game a bit more personality. New to Lego Star Wars II are doors that can be accessed only by stormtroopers or bounty hunters. Since you'll never have either in your party when playing in story mode, you'll have to rely on special helmet machines, which will give your character the appearance of either a storm trooper or a bounty hunter. It's a fragile ruse, though, because one shot from an enemy causes the helmet to fall off. The bounty hunter disguise also grants you the ability to toss out thermal detonators, which can be used to eliminate certain otherwise indestructible objects.

Lego Star Wars II puts a greater emphasis on vehicles than the original. You'll happen upon small carts, landspeeders, and AT-STs that you can pilot in the action adventure chapters, though there are also chapters dedicated to memorable sequences like destroying both of the Death Stars, fighting off imperial forces in your snowspeeder on Hoth, and racing speeder bikes through the forests of Endor. These dedicated vehicle chapters make the game feel more epic and break up the action nicely, but Hoth has been done to death already, and some of the sequences aren't as visceral as you might like. This is due largely to a stiff camera, something that occasionally hampers the action adventure levels as well. The camera usually stays in a fixed position, and though you're allowed a little wiggle room, there are a few specific points where it's easy to get stuck because the path is obscured.

There's no dedicated multiplayer component to Lego Star Wars II, though it does offer cooperative play, and at any point a second player can just jump right in. It works seamlessly and reduces the number of generally useless AI companions, but it's also disappointing that no version of Lego Star Wars II features online co-op. Whether you're playing alone or with a friend, Lego Star Wars II is easy. As long as you're pointing in the general direction, blaster fire has a way of finding enemies on its own, and death is barely punished with a small loss of money. It should probably take you around six hours to make your way through all three episodes the first time around, but there's plenty of additional content to keep you coming back.

Once you play through a level in the story mode, you can play it again in free play mode, which gives you some control over which characters you'll play as, and you'll find that each chapter is absolutely packed with secrets and areas that you simply couldn't get to with the story mode characters. You'll unlock plenty of additional characters simply by playing the game, but there are others that you'll need to purchase in the shop, and still others that you can unlock with a game save from the original Lego Star Wars, if it appeared on the system you're playing on. The free play mode also lets you use your own custom-made characters, which you can build using pieces of other playable characters. It doesn't effect the gameplay, but there's still something really funny about putting Darth Vader's head on Princess Leia's body when she's in her slave costume. Several different types of collectibles, an unlockable series of bounty hunter missions, and time trial mode all help to create some good lasting value.

Though the game is appearing on no less than eight different platforms, most of these versions are virtually indistinguishable. Featurewise, the GameCube, PlayStation 2, Xbox, Xbox 360, and PC versions of Lego Star Wars II are nearly identical, and the PSP version is awfully close, though it takes a slightly different approach to certain unlockables, and it also has much more pronounced loading times. The current-gen console versions all look slightly better than the original Lego Star Wars, while the PC version looks a bit better than those, since it can run at much higher resolutions. By default, the PC version implements a kind of goofy keyboard only control scheme, though it’s easily modified. There’s also gamepad support, and we found that a wired Xbox 360 controller automatically mapped all of the controls to the appropriate buttons.

The Xbox 360 version has the most graphical flair, with better reflections, better explosions, and a cool lens-focus effect that makes objects too close to or too far from the camera appear slightly blurry. It's definitely the best-looking version, but it's also got a very minor frame rate problem that crops up when there are a lot of particle effects. The achievement points in the Xbox 360 version are pretty well balanced. You’ll probably get almost 200 points just by playing through all three episodes, though there is also a string of achievements that require you to complete entire chapters without dying once, which in some cases is no small feat.

Regardless of the platform, though, the visuals have a ton of charm. Getting to see recognizable Lego pieces mingling with recognizable Star Wars characters and locales is just really endearing, and Lego Star Wars II does it quite well. A vast library of recognizable sound effects and that unshakably rousing John Williams score make the experience feel that much more authentic, and even though there's no real voice acting in the game, some miming and appropriate-sounding mumbles make it apparent what's going on.

As much fun as Lego Star Wars II is, it's unfortunate that it had to come second. Some of the novelty of the gameplay, as well as the concept itself, isn't quite as potent as it was the first time around. The original Star Wars trilogy just seems more deserving of this nostalgic treatment than the prequels. Still, anyone with even a sliver of nostalgia for Star Wars will find this to be a fun, good-natured romp. 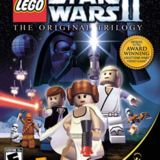 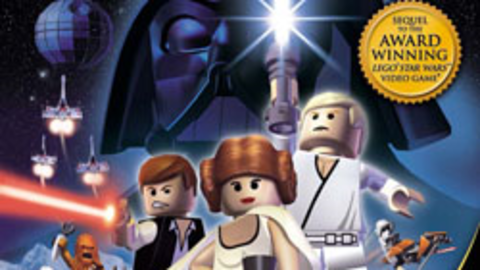