Despite its good looks and sounds, LEGO Rock Raiders is often frustrating and at times downright boring to play.

LEGO Rock Raiders is a real-time strategy game that sounds good and looks great. Its clean graphics and quirky animation are complemented by clearly delivered voice-overs, good sound effects and background music, all of which are upbeat, if repetitive. Unfortunately, despite its good looks and sounds, LEGO Rock Raiders is often frustrating and at times downright boring to play.

LEGO Rock Raiders takes its title from the actual building-block set of the same name and from the stalwart crew of characters you command in the game. The intrepid Rock Raiders have been sucked into an intergalactic wormhole and forced to land on a faraway planet. Their only hope of getting home is to mine the planet's caverns for ore and energy crystals to repair their damaged starship.

From the moment your first crew member is beamed down to the planet to the end of each mission-based level, LEGO Rock Raiders looks very good. For instance, even though each of the game's levels takes place in some sort of rocky cavern, the walls, rocks, and other features are all plainly but cleanly textured. Rock Raiders' character models are also simple, blocky shapes detailed by simple, solid-color textures. Yet your LEGO troopers and buildings look exactly as they should; characters and buildings all look exactly like their colorful plastic snap-together counterparts. The Rock Raiders and the dangerous-yet-cute alien monsters they encounter are all cleverly and whimsically animated - both in the actual game and in the excellent cutscenes that precede each mission.

Each of Rock Raiders' 33 missions is accompanied by simple, low-key techno tracks whose bass-heavy beats are in keeping with the game's underground locales but are otherwise forgettable. Likewise, Rock Raiders' voice acting is effective in most cases. It's especially informative in enhanced mode, one of the game's two installment options, the other being standard install. In enhanced mode, resting the cursor on any onscreen object or character elicits a loud, clearly spoken voice cue; younger children might find the extra identification helpful while playing. And Chief, the Rock Raiders captain, speaks with an amusingly gruff faux British accent as he briefs you on each mission and walks you through the game's seven tutorial missions in their entirety.

However, Chief's briefings and hints are long-winded and dry - so much so that the same youngsters who were probably intended to benefit from his thoroughness may instead find themselves dozing off at the keyboard. Fortunately, Rock Raiders' in-game sound effects are good enough to hold anyone's attention; the landslides and dynamite explosions emit loud, appropriate rumbles and crashes, and both the raiders and the monsters make their own endearingly humorous noises when they get injured or tired, or when they do pretty much anything other than dig, build, or wander about.

Unfortunately, digging, building, and wandering about are pretty much all your units do. There's no actual combat in Rock Raiders; when you do encounter a monster, you click your mouse once to put your units on action stations, and they'll scare off the enemy on their own. In fact, your raiders will do pretty much everything on their own, despite the vague hierarchy of priorities you can set for them. This autopilot artificial intelligence was probably intended to keep youngsters from being overwhelmed by micromanaging many different units at once - as such, all you do in Rock Raiders is give out orders, sit, wait, and hope they get carried out soon. However, your units are so autonomous that they'll often directly disobey orders, and this can be frustrating to say the least. To make matters worse, Rock Raiders' interface isn't terribly helpful - there are no means to jump to or center on a specific raider, so you'll have to scroll around the screen to find the one AWOL raider you need to complete the mission.

Rock Raiders' mission design doesn't do much for the game either. Since there's no combat, no diplomacy, and very little effective unit management, the majority of the gameplay is gathering resources to build structures. Even though different missions will have different objectives, like rescuing lost team members or building an air-supply station before your oxygen runs out, the ultimate objective for each mission is the same: Gather resources, either to build a certain building - perhaps to create a certain vehicle in turn - or simply to fulfill the mission's quota. No matter what you do, you'll usually find yourself waiting for your raiders to go back and forth among the cavern walls to collect enough resources - and in later missions, when more development and more resources are required, this can be tedious indeed. Even the search-and-rescue missions are largely dependent on building the right structure or vehicle, which you'll need to locate and/or reach your teammates. And to make matters worse, you can't save your game in the middle of a mission - so to advance through the game, you'll have to sit through each long resource-gathering session from start to finish.

It's truly lamentable that Rock Raiders turned out the way it did. It sounds good and looks even better, and its emphasis on building over combat seemed like it would make Rock Raiders a fun, nonviolent means of introducing younger players to the concentration and management skills that real-time strategy games require. Unfortunately, its tedious gameplay, repetitive mission structure, and monotonous narration will likely vanquish the attention spans of all but the most dedicated LEGO devotees. 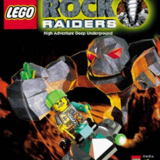