This charming rhythm game is especially good for first-timers, but it's a little light on content.

It's impressive how much the minifigs have accomplished through the years, particularly when you consider that they have curved yellow pincers where their hands should be. These easily recognizable Lego figures have already starred in a series of action games that parody popular films, but they are taking a brief break from their lightsaber swinging and whip wielding to rock out with some instruments that are just as plastic as they are. Lego Rock Band is a kid-friendly entry in the ubiquitous rhythm game genre, and it has just enough style and humor to stand out from the sea of note-strumming clones. Sadly, as charming as this accessible rhythm game is, there are a few omissions that make it seem stripped next to other games in the series, most notably the ability to play online. Even though this is a little short on content, Lego Rock Band is still a ton of fun with some friends and has a setlist that's good enough to keep even Rock Band veterans entertained.

The opening cutscene for Lego Rock Band borrows the same imagery popularized in Rock Band: the band balancing precariously atop a speeding van, whaling on their instruments as they weave down a barren stretch of road in a desert wasteland. However, it doesn't take long for the game to delve into the slapstick humor that has worked so well in previous Lego games. As soon as they enter a city, a charging dinosaur begins to chase them, and in their zeal to avoid his chomping wrath, they crash their van into a million pieces. Luckily for them, Legos can be reassembled in a variety of ways, and they quickly turn their van into a few other vehicles, all while they stand on top rocking. There are a few of these elaborate, always ridiculous cutscenes during the course of your trek to superstardom, and they add a lot to the otherwise predictable experience. It's goofy fun to watch the mute minifigs grunt and gesticulate wildly to get their point across, and these serve as a good reward when you reach a milestone.

Another Lego-themed highlight pops up when, during certain performances, the story and gameplay combine in a unique way. Rock Power Challenges have you curing the ailments of your cheering fans through the power of music. In the first such competition, a demolition crew is having trouble razing a dilapidated skyscraper. When they find that their wrecking ball and dynamite are ineffective against the sturdy brick foundation, they turn to you for help. Turning that bass dial up to 11 gets the ground shaking, and by belting out a particularly intense rock song, you can cause that building to topple to the ground. Although Rock Power Challenges do not change the basic gameplay in any way, it's a lot of fun watching your music have a tangible impact in the world, even if the scenarios don't always make much sense. Why would ghosts be chased away by music? If anything, it would make their haunted abode seem even more welcoming. Once you throw logic out the window, these challenges provide a solid detour from the standard jamming.

Like the other games in the Rock Band series, Lego Rock Band can be played with up to three friends, and a full band is composed of a bassist, guitarist, singer, and drummer. The gameplay hasn't changed at all from the first Rock Band game; you still strum along as notes pour down from the top of the screen. But it's still a lot of fun, especially when you have a few friends really getting into the music. The setlist is an odd blend of classic rock, modern hits, and recent tracks that have quickly lost relevance. The eclectic mix works well because there are just enough good songs to hide the less-than-thrilling ones. For instance, the inclusion of "Ghostbusters" is inspired. The catchy riff and infectious chorus are known by just about everyone, and it's awesome to sing along while everyone laughs at the ridiculous subject matter. This camaraderie also makes it easy to stomach lesser tracks, such as the inane Good Charlotte song "Girls & Boys," since it can be just as much fun to mock their embarrassing lyrics.

There are a few features in Lego Rock Band that help make it accessible for a wide audience. The most important inclusion is the ability to turn off the kick pedal for drummers. It can be difficult for less-experienced musicians to coordinate all their appendages into a coherent beat, so being able to focus on keeping time with just your arms alleviates many of the frustrations that go along with using the full kit. You also have the option to play a shorter version of any track in the game. This is perfect for players who don't have quite enough free time to play through the entirety of some of the meandering tracks, but the editing leaves a lot to be desired. Songs often abruptly end right before a chorus or guitar solo begins, which can be jarring, even if you aren't familiar with the full-length versions. Furthermore, overdrive notes often appear right at the end of a song, which makes it impossible to take advantage of them.

You can export the 45 tracks from Lego Rock Band into either of the first two Rock Band games for $10, which lets you enjoy the music even if you don't care about the cute aesthetics. You can also access the Music Store, although the selection has been trimmed to feature only family-friendly tracks. It’s hard to tell where they drew the line on what to cut, though. The stalker-happy "Charlene (I'm Right Behind You)" by Stephen and the Colberts and three Iron Maiden songs are still available, but Pearl Jam’s love ballad “Just Breathe” is strangely absent. Another difference from standard Rock Band games is that you cannot play online, which limits the long-term replay value. Even with those omissions, this is another solid entry in the popular franchise. The charming visuals and goofy story make this a good place to start for Rock Band rookies, and the setlist is quirky enough for everyone else. 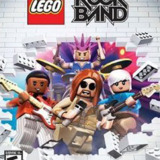 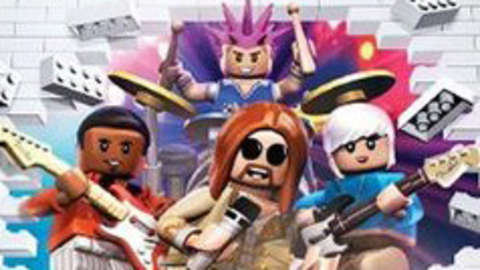 Rock Band makes its way into the Lego universe in Lego Rock Band.