A simple, colorful, and fun high-speed romp through a land built entirely of those famous snap-together building blocks.

LEGO Racers is everything you'd expect it to be: a simple, colorful, and fun high-speed romp through a land built entirely of those famous snap-together building blocks.

Essentially, LEGO Racers is much more of an arcade-style racer than anything else and seems like it would be more at home on a PlayStation than on a PC. It has little regard for physics and no real car damage modeling. Instead, it's a fast-paced game of unlimited powerslides and limited but plentiful power-ups on one of several fairly well-designed tracks. With these power-ups, you'll be able to shoot at an opponent in the lead, drop an obstacle on someone trailing behind, use a temporary invulnerability shield, get a turbo boost, or receive an enhancement to one of the above four. These power-ups are crucial to your success and basically constitute all of the game's strategy.

The actual racing in LEGO Racers boils down to the simplest of arcade racing principles - momentum. Though some of the tracks are truly challenging, if you can gain a solid lead on your competitors, your victory is more or less assured; conversely, if you let an opponent gain a solid lead, the best you can hope for is second place. This principle holds true for every single track in the game, which may prove frustrating for much younger LEGO aficionados not yet skilled in the art of playing computer games. In fact, LEGO Racers doesn't even have adjustable difficulty levels, which makes it seem as though it were intended for more experienced console gamers rather than for the small children of a PC owner.

Nevertheless, LEGO Racers is still quite fun to play, not only because its racing is solid and fast-paced, but also because it sounds good and looks great. You can't really be in any part of the game, not the building editor, the options menu, nor the middle of a race, without hearing some sort of cheery, upbeat cartoon music. And should you be in the middle of a race, you'll no doubt be surrounded by the ambient growl of your car's LEGO engine, the blast of a cannon power-up, and the cheers of triumph or shouts of dismay that you and other drivers will utter as you pass one another.

LEGO Racers looks even better than it sounds. When playing in 3D-accelerated mode, virtually everything in the game looks bright, colorful, and clean - races take place with no evidence of slowdown or pop-up, though getting into the occasional accident may cause some clipping. The texturing is minimal for the most part, though that's to be expected in a game whose decor is based on single-colored building blocks. However, beneath LEGO Racers' seemingly plain visage lies a good deal of subtle detail. Seven different official LEGO sets are present in the game in the form of racing opponents, track designs, and blocks for use with the build-your-own-car utility (which is somewhat limited because little space is provided to add new blocks to your car).

You can also create and customize your own LEGO driver using sets of over 20 hats, heads, torsos, and legs, as well as variations on facial expression. And the drivers are quite possibly the best thing about LEGO Racers. The art team has done a remarkable job animating every driver in more or less exactly the way you'd expect a LEGO figure to move, if LEGO figures could somehow come alive and move of their own accord. Even in the fanciful cutscenes, the characters' movements stay true to the original plastic LEGO person: No one's hand unclenches from its perpetual C-shaped claw, and no one's leg suddenly bends at the knee. However, all the drivers wave, cheer, jump up and down, look about, and walk around in a way that lends each an appreciable and thoroughly enjoyable helping of personality.

It's unfortunate, but aside from its fun if simple racing, good sound, and great graphics, LEGO Racers doesn't really have much else to offer. It features several modes of play, but all are fairly standard: a practice race, a timed race, a single race, and a circuit race (which is used to unlock new tracks and cars). Unfortunately, even though the circuit race mode offers six sets of four tracks and a seventh, final race for a total of 25, 12 of the 25 are simply previous tracks run in reverse. All told, including the practice track, that's really only 14 distinct races total, and none of these is particularly long. Single-player races are three laps, though you can set your two-player races to as many as five. And though the tracks are designed well enough for the most part, unless you fall madly in love with a certain few, you may find yourself growing a bit too familiar with them over time.

Regardless of its shortcomings, LEGO Racers is still quite fun. Its bright colors, generally simple gameplay, and kid-friendly graphics and sound also make it a safe purchase for concerned parents, though some of its more challenging tracks may not go over well with the very young. 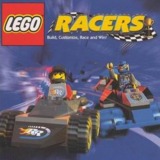 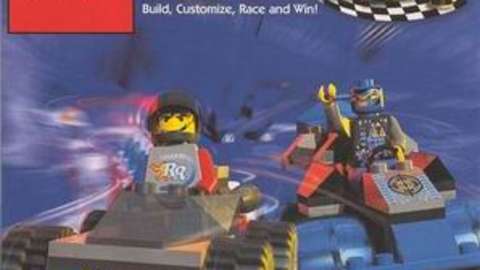