It's been obvious for a very long time that Lego games iterate more than innovate. If you pick up a Lego title, you are guaranteed a wholesome romp in whichever licensed universe is at hand. Everything is breakable and spits out glittery, golden collectibles when destroyed. Beloved characters are Lego-fied and reenact their famous antics with an extra dollop of cartoon absurdity. Those qualities remain appealing, but every so often, developer Traveller's Tales stumbles onto an idea that requires an extra bit of creativity to really make it sing. Sometimes TT steps up to the plate, like it did for Lego City Undercover and Lego Dimensions. Other times, well, it doesn't. It's a little sad to see Lego DC Super-Villains fall into the latter category.

The issue here really comes down to the premise. The idea of subverting the Lego Batman playbook and making a game that's all about DC Comics villains is a great one in theory. However, opening up the game to the entire roster of DC villains has the unfortunate side effect of highlighting just how weak DC's broad slate of evil is. Sure, you're doing fine when you've got The Joker using Lex Luthor as a straight man, or when big, unique baddies like Sinestro and Gorilla Grodd start showing up, but much of the game's story mode has you saddled with third-string riff-raff like Heat Wave and Malcolm Merlyn for extended stretches. Somehow, both Captain Cold and Killer Frost figure heavily into the main story, but the far more compelling Mr. Freeze doesn't.

There's a fertile concept in the idea of the loser villains hatching a plan to head up to the big leagues, but the actual plot takes a far less interesting course: The Justice League gets captured and replaced by the Justice Syndicate, who comic fans probably know as the Crime Syndicate of America, a super-powered group from alternate dimension Earth-3. On the surface, it looks like the Syndicate is doing a great job cleaning up crime, but the Syndicate's going a lot harder on the bad guys than the League ever would, leading the Legion of Doom to gather up a slew of recruits and take the fight to the Syndicate.

The wild card would appear, at first glance, to be you. At the outset, you get to create your own custom villain who ends up joining the Legion. It's an impressive slew of options you get at the start of the game, and an even more extensive selection is available as you play, earn more powers, and unlock more parts. Everything from your villain’s haircut, to their weapon of choice, which arm they use to shoot energy at their enemies, to even what that energy looks like can be customized. It’s an extensive collection of options from the moment you start the game, and almost intimidatingly vast by the end. My first villain took maybe an hour to create and be happy with, after which I watched as my lovingly crafted superhero was sidelined for most of the story.

Unfortunately, your custom villain is not the star of the game--they don't even have a voice--and no matter how badass you make yourself, all the other villains simply refer to you as Rookie (except for Harley Quinn, who calls you Dr. Doesn't-Talk-Much). You're occasionally called upon to use your technical skills to open a specific door, and you are able to absorb new powers along the way, but for the most part your budding baddie has almost no impact or meaningful presence in the story. Instead, most of the game's levels boil down to a formula: A group of one or two big-ticket villains and one or two small-timers go to a familiar locale--Gotham, Metropolis, Smallville, Belle Reve prison--to free some more of their criminal friends, and run into some of the remaining small-time heroes in the process, e.g. the Teen Titans or Nightwing.

The moment-to-moment gameplay remains as simple and accessible as ever; combat boils down to spamming a single attack button, with the safety net of infinite lives, and there's some very rudimentary platforming. Finding secrets usually just means running around breaking everything until a shiny new toy pops out. There's nothing really wrong with that by itself, given the Lego games’ appeal to a younger audience, and watching Lego structures explode into a million pieces really hasn’t lost much of its innate joy, even after all this time. The problem is, only a few esoteric sliding tile puzzles differentiate the game mechanically from things the Lego Batman games were doing 10 years ago.

The level design in particular is a major strike against the game. It attempts to evoke a sense of chaos and disorder for the villains to feel at home in, but everything is so cluttered and elaborate, it's hard to know what's breakable and what's not, which character you're controlling, and what you can actually interact with. The wanton destruction that’s kind of Lego’s bread-and-butter loses something when the area being destroyed looks like a mess to begin with.

The villains themselves are well-animated, and great care has gone into differentiating the hundreds of playable baddies from each other, be it all of the Joker's attacks ending with theatrical flourishes, Killer Frost's ballerina moves, or Gorilla Grodd being able to literally leap over tall buildings in a single bound. There's a ton of overlap from the small-timers, though, and the alternative choices don't provide you with a reason to want to use them. Even the relatively easy attention grab that comes from having much of the voice cast from both the Superman and Batman Animated Series from the '90s show up--including Mark Hamill's iconic Joker, and a delightfully up-for-anything Michael Ironside reprising his role as Darkseid--doesn't quite land due to the more interesting villains taking a backseat.

Playing as all villains, you'd think there'd be more opportunity to wreak havoc on Metropolis or Gotham City, even if it's in an E-for-Everyone kind of way, but there isn't. The best part of the game is once the main story is over and you can just roam around the rather expansive open areas at will. Any and all villains unlocked during the game are accessible, and there's tons of little sidequests and races to take on. This is always the best part about the Lego games, though.

Ultimately, Lego DC Super-Villains goes down as another cookie-cutter Lego game, and while there's still plenty of merry mayhem to unleash, it's the same kind of mayhem we've seen before. What should be as wild and riotous as the Clown Prince of Crime comes off as just another mild-mannered reporter.

View Comments (18)
Back To Top
5
Mediocre
About GameSpot Reviews 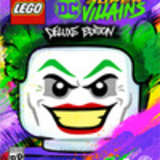 Justin Clark finished Lego DC Super-Villains' story and spent about three hours fooling around in Free Play. He also spent four hours one day in the character creator. He regrets nothing. A review code was provided by the publisher.