This tactical combat game features battles, battles, and more battles, and it's fun, though very light on content or depth.

The back of the Legion Arena box has the famous Julius Caesar quotation "Veni, vidi, vici" on it ("I came, I saw, I conquered"), which is a pretty apt description of this tactical combat game from Slitherine Software. Though its name may make you think it's a sequel to Slitherine's 2002 strategy game Legion, that's not quite the case, as Legion Arena takes out all the strategic aspects of being able to run the Roman Empire. Instead, this tactical combat game puts you in the shoes of a military commander on the ground, tasked only with winning a long series of battles. The result is a fast-paced and fun game, but one that's admittedly very lightweight and doesn't have much overall depth to it.

The Arena in Legion Arena alludes to the fact that this is a game about battles. Or, more specifically, the great battles of the Roman and Celtic empires, including the Etruscan and Punic Wars and beyond. While there are three campaigns in Legion Arena, the first campaign is essentially a quick tutorial, so you'll primarily play from a Roman or Celtic perspective, and these are huge campaigns, as there are more than 100 battles in the game.

Basically, your job is to lead troops in each battle. Win, and you move to the next battle in the campaign. Lose, and you automatically reload to before the battle, where you can tweak your strategies and troop formations. In fact, most battles are won and lost in the planning phase, as you must deploy your troops onto the battlefield, giving them initial orders and formations (defensive, balanced, offensive) and taking the terrain into account. (Rough terrain is bad for cavalry, while open terrain can leave certain infantry heavily exposed and vulnerable.) Once everything is set, simply hit the start button, and the battle unfolds at a rapid pace. And while you can give orders on the battlefield to react to certain situations, this isn't always easy, as the game models the inherent difficulty of managing a massive battle. After all, trying to give multiple orders to different units spread out over a battlefield can be extremely difficult. To reflect this, your general only has a limited number of order points that he can expend, and then he has to wait for the point bar to slowly recharge. Between battles, you can improve the drill abilities of your units so that they require fewer order points to command, but you're still going to have to pay careful attention to your initial deployments.

There's very much a puzzlelike element to the battles in Legion Arena, as you have to solve some pretty challenging tactical situations. Some might require you to win within a certain amount of time (say three minutes), while others will require you to inflict a minimum number of causalities on the enemy, or limit the number of causalities that you take, or both. You have to carefully study the makeup of the enemy army, as well as the terrain, and deploy your units to take advantage of any mismatches. For example, if the enemy's flank is composed of light militia, that might be where you want to attack with heavy cavalry. Or you might want to put skirmishers in wooded areas so that they're not exposed in the open. The fact that there's really no penalty if you lose (you simply try, try again until you get it right) puts no real pressure on you. There's no sense of loss, either, and the Roman and Celtic empires never really feel in danger.

In between battles, you can recruit troops, replace losses, promote units, and purchase better equipment. This is where most of the game's strategic depth can be found, as you can really tinker around with the makeup of your army. For instance, you can create highly specialized anti-cavalry units, improve the trampling ability of your own cavalry, train killer archer units, and more. Units gain experience in battle, and you can use these experience points to purchase various unit upgrades. Meanwhile, replacing losses isn't too hard; you expend fame points to do so, and since you get a ton of fame points for a win, you're usually in no danger of not being able to replace losses.

The sheer fast-paced nature of battles (most are over in less than five minutes), coupled with the little downtime between battles, makes Legion Arena feel like a pretty lightweight strategy game. Once you've gotten over the short learning curve, you'll be blitzing through centuries of history in no time, and the game feels like a nice introduction to the great battles of the ancient world. The game even comes with a free e-book of the Gallic Wars if you want to learn more. At the same time, there's not a lot of depth or variety in the game. Sure, the battles get progressively harder, but they're generally not so hard as to cause frustration, and the fact that you play them over until you get them right means that they're more like puzzles than epic moments in history upon which everything hinges. Legion Arena has multiplayer support for two, though the game's built-in browser is a bit rudimentary. Still, you can set up matches by determining the number of battles per round, the amount of denari each side starts with (to purchase units), and which maps to battle on.

While the screenshots may make Legion Arena look a bit like 2004's huge hit Rome: Total War, the games actually aren't all that similar. In Legion Arena, you can't command armies of tens of thousands of troops. Instead, the game abstracts some of the details, so you'll command troops on a much smaller scale, and the battlefields themselves aren't that large. Given the game's relatively small budget, the 3D graphics engine looks pretty good. We wish there were a bit more musical variety (you'll hear the same battle song over and over), and the sound effects are a bit thin, but, in general, this is a good-looking strategy game. And that pretty much sums up Legion Arena. The game has a good battle engine, but that's about all it has. Hopefully, Slitherine will build on this and include the overarching strategy game next time. 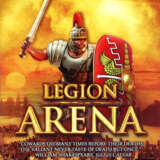