The lack of match variety, the sloppy control, and the poor overall execution make Legends of Wrestling a rental at best.

Legends of Wrestling is definitely a new direction for modern wrestling games in that it includes the classic wrestlers of the past and pits many of the greatest performers in wrestling history against each other as they vie for domination of their regional wrestling federation and compete for world championship gold. Fans of wrestling history and wrestling present will be pleased to find Hulk Hogan's leg drop and big boot, as well as Rob Van Dam's five-star frog splash and Van Daminator. While the idea of playing as these wrestling legends is an appealing one, Legends of Wrestling sadly doesn't follow through with an equally competent game.

Aside from the Hulkster and RVD, there is a huge cast of wrestling greats to choose from. This includes Bret Hart, Brian Pillman, Nikolai Volkoff, the Iron Sheik, Ted DiBiase, five of the Von Erichs, and many more, adding up to 42 in all. Every legend is rated in strength, toughness, charisma, mat skills, recovery, and speed. Each wrestler also has certain move specialties, which can vary from hard-core, to grappling, to cheating. Thus, "Superfly" Jimmy Snuka will do more damage performing high-risk maneuvers, while the One Man Gang will dish out the most punishment while brawling. Each wrestler also has an onscreen indicator for health and their finisher.

These wrestlers compete using a grappling system whose core mechanic is known as the intermediate start position, or ISP. The basics of the ISP are simple. When two characters are locked in a grapple, the dominant player can then force his opponent into one of four other positions, such as belly to belly or his head between your legs. From this position, the desired technique can be applied or countered by the opponent. Countering requires proper timing using a meter similar to those used in golfing games. This meter is divided into green and red sections, the green section being larger if the move is easier to perform. The opponent can block a counter by stopping the meter prematurely within the green section, in a direct contest of reflexes. A similar meter is used to combine moves together. This way, some wrestlers can perform impressive transitions, like from a power bomb to a figure-four leg lock. Submission maneuvers are handled like in the wrestling games of old, in that both wrestlers begin a button-mashing contest to see how long the move stays locked. When the defender successfully breaks the hold, it can either be reversed or he will slide over to the ropes, causing the referee to break it up.

The finishing-move meter is charged by appealing to the audience or dealing out damage. Once the meter is full and flashing, your wrestler has about 15 seconds to pull off the maneuver, which requires proper positioning and a flick of the right analog stick. The grappling system is a lot deeper than the poorly written instruction manual implies--there are a variety of moves that can be accomplished when pushing an opponent around in a grapple. You can tie an opponent up in the ropes, place him in the tree of woe in a corner, and even perform a sunset flip when the opponent is entering the ring. At any time, your wrestler can also pull out a weapon from underneath the ring, such as a chair, kendo stick, or two-by-four. Every wrestler can use all the weapons, but certain weapons have special attack modes, like a triple trash-can hit, a double chair shot, or a Van Daminator.

Legends of Wrestling captures the grappling greats at the peak of their careers, and in order to best convey this, Acclaim has decided to use a heavily exaggerated, muscle-bound graphical style for the wrestlers. Their appearance is very much like that of thick plastic action figures, which, when combined with the generally mediocre animations, fails to impress. Fans of violence will find that blood flows freely in Legends of Wrestling, with wrestlers' foreheads bursting open and dripping frequently. As you travel to each of the 10 generic venues, you may notice how poorly done the crowds are. There are about a half-dozen polygonal models on each side of the ring, although the same models are used far too often, creating the appearance of an audience of clones. The poor frame rate, combined with the already slow pace of the game, can make any but the most excitable gamer feel bored. The television-broadcast-style presentation is for the most part reliant on rapidly shifting camera angles. At certain points the camera will zoom in on a move or spin around the ring distractingly. Most annoyingly of all, the camera will occasionally shift into a stop-motion Matrix-style camera. This effect has been overused, and it doesn't fit well in the context of this game. Chugging along while you play are a series of adequate, if unimpressive, in-house audio selections, which are made more disappointing considering the novel use of music in the introduction movie.

A bit more effort could have easily been made to truly capitalize on the excellent premise behind Legends of Wrestling. The taunt animations are painfully generic in most cases. Ted DiBiase fails to do anything related to his money gimmick, and Koko B. Ware enters without Frankie the parrot or his birdman flap. For the most part, the roster itself is questionable, with a huge number of memorable wrestlers being left off the roster, such as Dusty Rhodes, Bruno Sammartino, Ric Flair, Lou Thesz, Abdullah the Butcher, Rowdy Roddy Piper, The Ultimate Warrior, Jake the Snake Roberts, Demolition, and countless others. The create-a-legend mode is passable, and it makes up for the missing wrestlers in many ways, but it's sorely lacking in others. Acclaim saw fit to only include a single face for all the created wrestlers, and instead of using a sliding color palette, a selection of about a dozen total colors are available for every part. However, the addition of the create-a-stencil paint program, and some really cool entrance gear like the Iranian flag, flesh out the create-a-legend mode. To top it off, the announcer even recorded entrance names for some of the missing wrestlers, like Ric Flair and Roddy Piper, so they seem authentic after creation.

Some of the interesting features that were originally slated to appear in Legends of Wrestling never made it in. Barbed-wire matches and scaffold matches are nowhere to be found, and there is no commentary to speak of. Despite the adequate recorded voices of greats Captain Lou Albano and the "Mouth of the South" Jimmy Hart, the brief manager advice sessions between matches aren't really worth watching. The interactive ring entrances are painfully bad, with wrestlers high-fiving empty air and some taunt buttons apparently not working when they should. Worst of all, if you bother watching the ring entrances, you're forced to sit through an additional bothersome loading screen before the start of the match. Working the crowd was implemented as a feature, basically judging your performance in the ring and rewarding you with popularity. This system could have benefited from examination of the audience mode in Fire Pro Wrestling, as it feels way too repetitive. Every match, you will be forced to go through the motions of using a weapon, drawing blood, bumping the ref, cheating (if in a tag team), and performing a minimum number of combos, and reversals to win the audience's favor. Match to match, the formula never varies, and so neither will your in-ring performance.

Perhaps most disappointing to wrestling fans will be Legends of Wrestling's poor control. There's a noticeable delay between the press of a button and the reaction onscreen. This delay requires that certain moves be queued instead of performed when desired. In addition, certain button commands are absolutely unresponsive and nearly impossible to pull off at will. Climbing a turnbuckle will either happen smoothly every time or not happen at all, and initiating a run is troublesome at best. The final version of Legends of Wrestling is also plagued by a number of bugs, including frequent collision detection issues and garbage cans that dance, spin, and bounce of their own accord.

Fans of wrestling will be pleased with the direction that Acclaim has taken with its newest franchise. If the bugs are worked out, and the gameplay is improved, then the Legends of Wrestling series may one day become a truly great wrestling franchise. The regional career mode concept is an intriguing one--traveling from city to city in a bus is a laugh, and progressing through the different federations collecting championships is quite fun. Best of all, some of the greatest wrestlers from decades past are making their first-ever appearance in a video game, and that in itself is exciting. However, the lack of match variety, the sloppy control, and the poor overall execution make Legends of Wrestling a rental at best.

View Comments (0)
Back To Top
5.3
Mediocre
About GameSpot Reviews 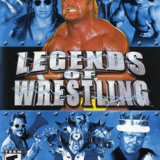