We can't urge you enough to play this game.

As any good Nintendo player well knows, Shigeru Miyamoto's The Legend Of Zelda series has been going strong for more than 15 years over a wide variety of platforms. Young hero Link's magical adventures began on the humble NES before spawning sequels and spin offs on the Super Nintendo, Nintendo 64, and (argh) Phillips CD-I. In 1994, The Legend Of Zelda: Link's Awakening graced the blurry, monochromatic screens of Game Boys across the globe. Many claimed that it was indeed better than the 16-bit SNES game that it chronologically followed, although navigating mazes where all the rooms looked similar and staring at that infernal screen for hours on end turned many would-be fans off. Nintendo has wisely used the launch of the next-generation (well, sort of) Game Boy Color to give the old game a fresh look and a fresh audience.

The locale of Link's Awakening, Koholint Island, is huge - even more so when you consider the hidden underground passageways, dungeons, and waterways. However, don't be afraid of getting lost. A map is always accessible by hitting Start (which, of course, also pauses the action). The map shows every area you have visited with unexplored locales represented as mysterious black blocks. The owl's messages are stored here, too (we'll get to him later). If you can't remember what you're supposed to be doing after loading a saved game, just take a look here. Also, note that your position on the map is saved where the last door you used is, so be sure to save near your next objective. There are beaches, towns, forests, rivers, lakes, waterfalls, fishing grounds, shops, mountains, deserts, fields... you name it, it's packed in here somewhere.

Link awakens in a hut and is slowly told by the locals that to leave and go back to Hyrule, he must awaken the Wind Fish. This aquatic heavy sleeper lives inside an egg on top of a nearby mountain and can only be lulled from its slumber by playing eight magical instruments. As you may have guessed, getting these instruments is a lot harder than it seems. The instruments lie at the heart of eight separate dungeons, protected by all sorts of monsters, traps, and puzzles. It's time to grab your trusty sword and shield and get to it

At key moments through the game, an owl (bearing a discernible likeness to the one found in N64's Ocarina Of Time) flutters in and gives you pointers. He'll offer cryptic clues to the larger storyline while telling you directly what your next objective is. His visage also appears in dungeon walls, revealing key clues for quick-thinking players. Other characters go about their daily business (usually by standing around in a room doing nothing but talk to complete strangers such as yourself) and can give valuable clues or even prized objects that come in useful later. You spend a significant portion of the game wandering around and taking items given to you by one character and trading them with another character for an even more useful item.

Speaking of items, plan on spending a good amount of their playtime in the item selection menu. Pressing Start opens it up, and the menu lets you assign two useable items to the A and B buttons. While N64 players who have been spoilt by the multiple assignments they can have with their larger joypads will squirm at the thought of changing items frequently, however, it's a system that works well within the host machine's constraints.

Dungeons are the meat of any good RPG, and the ones in Zelda DX are extraordinarily filling. The real beauty of the design is that you can reenter cleared dungeons with new abilities (such as picking up and throwing bombs) and discover new areas that were previously unreachable. Each puzzle you are faced with has a perfectly logical solution, and you'll only come across a few situations that will require you to leave and get new items from the outside. Game Boy Color owners are granted access to an all-new, exclusive dungeon that isn't necessary to complete the game, but is pretty cool nonetheless. It's nice to see Game Boy fans who bought the original game rewarded with something new after buying a new piece of hardware.

Speaking of colors, the ones in Zelda DX can't fail to impress. Each area has its own mood-setting color scheme that makes remembering your location far easier than its monochrome predecessor allowed. Characters sport their own individually hued clothes and buildings, and objects have been carefully painted. The overall effect makes the game highly reminiscent of the SNES installment of the series, which, of course, is no bad thing. Oh, and before we forget, owners of the Game Boy printer get a photo scrapbook of Link's adventures that you can copy. It's pretty cool when an accessory that cost as much as the machine you bought it for is actually supported.

The beauty of Zelda is that it makes the scary world of console RPGs easily accessible for anyone, blending action, adventure, and good old-fashioned gameplay into one seamless package. It's definitely one of the best Game Boy games ever, and it looks better than ever. We can't urge you enough to play this game. 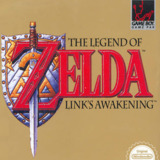