Once more into the breach.

It's fitting that the music first greeting you in Legend of Grimrock II is a rousing, bombastic tune that would just as easily be at home in a summer fantasy blockbuster. The sequel is a grand adventure, a far cry from the claustrophobic tunnels of its predecessor's excellent first-person, tile-based dungeon-crawling revival. And while the suffocating atmosphere of the franchise's first entry has been diluted by a focus on exploration rather than escape, its mechanics and well-crafted content have flourished and been improved in almost every way. Legend of Grimrock II is a logical and brilliantly executed next step for the series, exhibiting slight symptoms of too much freedom, but never stumbling for long.

Grimrock II has little to do with the mountain peak in the game's title; rather, it serves as reassurance that the formula defined decades ago, and modernized in the original Grimrock, still elegantly drives the experience. You fashion a party of adventurers with classic Dungeons & Dragons character trappings and step through unexplored three-dimensional terrain one tile at a time. Along the way, you acquire armor, weapons, and artifacts of increasing prowess, outfitting each of your characters to do real-time battle against a bestiary of monstrous creatures. You trigger fatally hidden traps, avoid the obvious ones, and search for vital clues to unlock gates and doorways, while solving riddles and puzzles in a quest for answers to larger mysteries and the almighty pursuit of power itself.

Legend of Grimrock II shirks the longstanding reliance on subterranean labyrinths that have so-well suited the genre; instead, it pulls a new foursome of characters to the Isle of Nex, and the welcome addition of outdoor locales. From the temperate woodlands of Twigroot Forest to the noxious vapors of Keelbreach Bog, each environment carries a unique personality, and together they create a more diverse setting than the original's endless halls of stone and darkness. Of course, thousands of steps are still waiting to be taken in decrepit dungeons and tight tunnels, but the promise of returning to the fresh air of the surface alleviates the impenetrable gloom of underground life. Even returning to an open sky of a pitch black night--thanks to the great addition of a day and night cycle--feels like a safe haven from the skittering terrors that roam the chasms below."

The openness of the island setting is mirrored in the game's navigation. Shortly after your arrival on Nex, you're free to traverse nearly anywhere you can see, assuming you can unlock the barriers to entry and survive your own curiosity. To that point, there's a naural sense of progression in Grimrock II: it gently guides you through each new zone without spelling out an optimal order for visiting them. Should you somehow decipher the means to wander into territory too dangerous for your fledgling skills, that gentle hand becomes a clenched fist, ready to immediately bludgeon your party for its foolhardiness--but the option exists, and that non-linearity is refreshing.

Returning to an open sky in a pitch black night--thanks to the great addition of a day and night cycle--feels like a safe haven from the skittering terrors that roam the chasms below.

Unfortunately, that freedom of choice and ambiguous direction is where Grimrock II briefly falters. Much of the adventure hinges on the collection of scattered MacGuffins, conveniently spaced and designed to require the exploration of every area in order to chase them all down. In fact, the journey from your shipwrecked landing to the heart of the mystery is largely devoid of overarching narrative until the climax. What little references there are to a grander scheme are delivered in coy notes from an unknown master of this undiscovered island.

It's understandable that a focused narrative pushing you from one area to the next might hamper your ability to freely navigate the isle, but the chosen alternative is a nearly blind journey requiring a herculean effort and an enormous amount of good faith that it's going to pay off in the end--which it thankfully does. Instead, the real story takeaway is found in the immaculately designed riddles, puzzles, and moments of sometimes-not-so-near fatal choice that punctuate every step of the adventure.

Developer Almost Human has deftly crafted dozens of bite-sized, standalone engagements that are often vague, frequently complex, and always clever. And it's in these moments, when you're stuck wondering how exactly the provided clues don't point to the seemingly obvious conclusion, that you might truly appreciate the openness of a world that allows you to go off and perform some other task while you let all the elements of a particularly devious obstacle simmer in the back of your mind.

Overcoming the many vague riddles in Legend of Grimrock II is occasionally grueling, but to Almost Human's great credit, the answers are nearly always rooted in logic or interpretation, rather than finding some minute trigger on a wall. Oh, there are many secrets on Nex that are only uncovered with a keen eye, say, scrutinizing a sea of stone for the smallest switch, but these instances are almost exclusively tied to superfluous loot rather than vital game progression.

The vein of thoughtful improvement running through Legend of Grimrock II may be most apparent in its intricately designed quandaries, but it snakes through even the most basic elements of the franchise. Character creation, the cornerstone of the dungeon-crawling experience, exhibits a comparable leap forward. Where the original Grimrock opted for a trifecta of class selections--Fighter, Rogue, and Mage--the second offering builds on that trinity, filling the spaces between with new and unique roles. Choose to crush monsters through the Barbarian's brute force, strike a balance between marshal and mystical arts with a Battlemage, or brew life-saving concoctions with collected herbs as an Alchemist. All are viable additions to a budding party, though in practice, some classes are clearly more beneficial than others.

The real story takeaway is found in the immaculately designed riddles, puzzles, and moments of sometimes-not-so-near fatal choice that punctuate every step of the adventure.

In another sly wink poking fun at the tropes of the genre, there's even a Farmer class, which excels in absolutely nothing you'd want in an adventurer and gains experience not by killing enemies but by eating food. It's these small touches of playful meta--for example, some races gain hidden statistical benefits after ingesting their preferred foods, and the new Ratling race has a special affinity for cheese--that paint Grimrock II as a creation that's totally comfortable in its own skin while still true to the dungeon crawling mantle of yore.

But while an old-school spirit might power the core, the vessel is a more modern, expanded take on the experience than even the original Grimrock had to offer. The addition of weapon-specific special attacks adds a welcome layer of depth to combat; by drawing from your characters' energy pools, you're able to trigger devastating blows with titanic axes, or launch a flurry of slashes with a sabre. Moreover, the overhauled spell casting system allows you to quickly swipe across runes to prime a spell, replacing the cumbersome need to click each individual one. Now you can engage in combat that is fluid and interactive, rather than just repeatedly hacking at something until one of you squeals and collapses.

Better still, when paired with the active and passive bonuses of available skills and traits, each character can potentially attain enough unique purpose that fights are often elevated from slugfests to battles of timing, positioning, and resourcefulness. The appointed leader of my party, Arielle the Knight, started as the tough-as-nails tank, but somewhere during my 30-hour adventure she learned to dual-wield rune-adorned scimitars, backstabbing unsuspecting enemies in her impractically bulky armor. Thanks to the untethered skill system, she did it all, and you're free to similarly build any class in any direction you choose.

Combat in Grimrock II is a more refined, empowering, and choice-centric part of the experience this time around, and with good reason: The beasts that inhabit the Isle of Nex are a much more formidable breed. Mainstay monsters that have adorned the darkened hallways of grid-based crawlers for years are well-represented: giant spiders, rats, ogres, and the undead. But new to the fray are creatures that, like your characters, carry their own functional skillsets. The giant toads roaming the bog may seem straightforward, but when one leaps across several tiles, landing behind your party, lashing out with its sticky tongue and pulling your characters' weapons out of their hands, the encounter shifts dramatically in its favor. Wispy elementals patrol the forests and press their attacks, unfazed by conventional weapons and spells, and leaving you helplessly searching for a vulnerability of some kind. And amethyst-hued cycloptic floating squid-beasts spew blinding ink from both ends, disgustingly enough, in the jewel-encrusted mines beneath the surface of Nex.

These functional additions to the bestiary are fairly indicative of what you should expect from Legend of Grimrock II: A well-established foundation revisited and excellently enhanced in the years between releases. Nearly every aspect of this dense adventure has been touched in a positive way, with none of the clutter that often accompanies second-act offerings that try to cram too much in. And despite the lack of narrative, Grimrock II is an outstanding second trip to the nostalgia well. It synthesizes the key elements that made the first game great, improves upon them in intriguing and powerful ways, and uses that as a platform for designing and launching more of the same great content.

Legend of Grimrock II is similar to one of its many well-designed riddles: While solving it may be a long, arduous process, approaching each obstacle with newfound understanding and hearing the victorious click of gears finally turning gives you a feeling of profound pride and accomplishment. Legend of Grimrock II is another glorious glimpse of the past, a window to a genre dead and buried and brought back to life with care and respect, and I urge you to peek through it.

View Comments (160)
Back To Top
9
Superb
About GameSpot Reviews 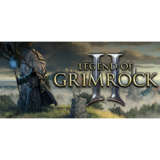 Brandin Tyrrel has loved grid-based dungeon crawlers since he played his SNES copy of Eye of the Beholder. He spent 30 hours plundering Grimrock II, took 58,000 steps, and turned into a bear once. His party was level 15 when he finally shut it down, and he still hadn't found every secret.