At a quick glance, Legasista looks like a typical Japanese role-playing game: anime-styled characters, some plot bits about an ancient society with long-lost weapons, and lots of complicated statistics and systems to keep track of. But Legasista's outward appearance is somewhat deceiving: this is actually a challenging dungeon crawler with many layers of depth. Players familiar with NIS's Cladun series for the PSP will immediately feel at home here, as the animations and core gameplay of Legasista are based heavily off of those games. However, Legasista has some key differences from the Cladun adventures, and it's those differences that ultimately make it a superior game.

Legasista follows young Alto, whose sister has been transformed into a small jewel. The only way to reverse the spell is through the power of an ancient weapon which has been sealed away in a tower. Alto gets more than he bargained for, however, when he finds that the weapon is a humanoid female named Melize who has lost most of her functionality. The artifacts containing her abilities need to be found in the tower, but there are a few other treasure hunters and opportunists who are raiding the tower for themselves and don't appreciate Alto's meddling. It's a simple story, but effective and engaging enough to keep you going. Its presentation through crudely animated character artwork, however, looks cheap and awkward.

As you advance through the story, more dungeons open for you to explore, and each completed dungeon yields more plot twists and potential party members for your exploration troupe. Base controls for exploration are pretty straightforward: a simple strike attack, a jump, a dash that increases speed at the cost of defense, and shoulder-button controlled magic spells and item use. Certain equipment can change these controls: for example, bows and hammers can be charged by holding down the attack button, while equpping a shield replaces the dash move with a guarded trot.

Most dungeons are short affairs with a few traps and treasures to claim, while others are laden with damaging gimmicks and tricky puzzles that can leave careless players in a bind. Still others feature (sometimes optional) bosses that test your ability to dodge, guard, and use your weapons and magic effectively. To make this a bit easier, you can take up to three characters into a dungeon and swap between them as you wish. Each character has his or her own set of equipment and special skills, some of which can be useful in particular situations: mechanical characters, for example, can't be poisoned, but also can't use any healing items since they don't eat food.

In Legasista, energy frames are the primary means of character enhancement. These easy-to-understand frames work as simple, single-character equipment arrays that offer distinct benefits and disadvantages. As you soon discover, equipment arrangement is very important in Legasista. Each item you wear has a durability rating, and taking damage decreases the durability of the item furthest to the right in your gear display. Once the durability hits 0, the item breaks, and you lose its benefits and stat boosts until you either fix it or leave the dungeon (in which case it repairs automatically). After a certain amount of gear is gone, attacks deplete your green health bars, and once all of your HP is gone, that character is kaput.

The keys to managing your equipment are the aforementioned energy frames. The energy frame a character uses determines precisely what gear and enhancement items they can equip, as well as the order in which your gear and HP is likely to break. Multiple energy frames are earned over time for each character class, and learning to pick and outfit a good frame for the situation is vital. Is it better to use a frame that puts most of your HP bars to the right and protects your special augmentations, or are you willing to sacrifice your armaments to survive? A limited amount of item pickups can also be equipped mid-dungeon, but their maximum durability upon leaving will be reduced as a result. You'll need to take a lot of factors into consideration, as losing vital items like magic spells mid-dungeon from a fierce assault can be hugely detrimental.

There's a great deal of gear to choose from, too. All items in Legasista are earned in the dungeons; there are no shops or currency, so you amass a virtual armory of all kinds of items. Equippable armaments are determined by a character's class and energy frame, and every piece of gear has variations on its efficacy, special skill offerings, and equip cost. The most desirable items are those that come with "titles," which provide various augmentations. It's possible to swap titles between equipment by discarding old items, collecting their titles, and overwriting titles on other gear, thus creating some awesome armaments. However, the process by which this is done seems to have suffered some errors in localization, making it difficult to figure out an essential element of high-level customization.

Equipment is just the tip of the iceberg: gaining levels earns points that can be spent on various enhancements, some of which can carry over should you elect to swap a character's class. If you're willing to put in the effort, you can build a very powerful character to your personal specifications. After a certain point in the story, you can even make custom characters from scratch, defining everything from their starting class to their special abilities. You can even create and edit custom sprites and animations for your characters, though this is easier said than done--the in-game sprite editor's interface is confusing and cumbersome, and while you can import PNG files from a PC to use, the files require very particular formatting. You'll likely find yourself using one of the prebuilt models based on existing NIS game characters and calling it a day.

There's a great deal of depth to the main game, but the extra dungeons are where Legasista gets really intense. After a certain amount of playtime, you unlock the ability to discover secret dungeons and to literally dig up randomly generated dungeons. These multilevel "ran-geons" are both the most rewarding and the most treacherous locales in the game. By using certain types of gates to hop from one floor to the next, you can influence elements like enemy levels, item drop rates, and special rules.

But sometimes gates aren't what they seem, and one unlucky gate trip can transform a breezy dungeon romp into a hellish gauntlet of overpowered foes--and wiping out means losing all of your hard-earned loot. Since stronger foes yield better item drops, management of risk/reward in the ran-geons becomes an exciting metagame in itself. It's possible to spend hours just making random dungeon runs for the chance at incredible items, all while enjoying a mix of fantastic songs from the superb soundtrack.

Despite some flaws, Legasista is a surprising little gem of a game in the current lineup of PlayStation Network exclusives. For $15, you get a challenging, fun dungeon crawler with plenty of depth and a lot of potential playtime under its hood. It might not seem like much at an initial glance, but spending some time adventuring in Legasista will likely convince you of the worth of its hidden treasures. 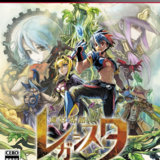 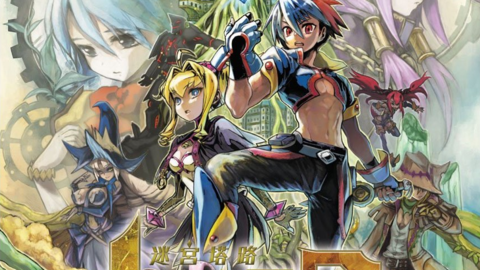