Another good thing about the Rapture is that it will take you away from disastrous, buggy games like Left Behind: Eternal Forces.

Don't mock Left Behind: Eternal Forces because it's a Christian game. Mock it because it's a very bad game. The real-time strategy/adventure game from Left Behind Games based on the best-selling series of novels from Tim LaHaye and Jerry B. Jenkins will even let down born-again types who expect the Rapture to beam them up to heaven any day now. Nobody has enough faith to endure a game with such a hokey story, terrible mission design, serious problems with the interface and graphics, and loads of crippling bugs.

Of course, a lot of people won't make it far enough to find out. Because Left Behind is based on the evangelical notion that you have to accept Jesus Christ as your personal savior or spend an eternity at Satan's weenie roast, most gamers won't get past the "apocalypse right now" premise. Still, games are typically based on outlandish ideas, so it's unfair to dismiss this one based on religious grounds. Yet this is an awfully tough game to take seriously because the absurd story only works as a self-parody.

How goofy is this tale? Well, the battleground between the true believers' Tribulation Force and the Antichrist's Global Community Peacekeepers is a heathenish New York City. Your units include gospel-singing musicians, missionaries, healers, and medics. Enemy units feature college-trained secularists, devils, and foul-mouthed rock stars with their electric twangers. Stereotypes are everywhere. New Yawkers speak with such cheesy accents that they should be driving Brooklyn cabs in 1954 while chewing on unlit stogies. Similarly, the game has a 1950s-style attitude about men and women. Only males can become priestlike disciples and handyman builders, whereas only women can become nurses. Female units are actually designated as such and given ridiculous titles like "Friend Woman" and "Medic Woman," a sexual distinction that unsurprisingly isn't extended to their male counterparts. Finally, the game isn't politically correct when it comes to race, either, because a fair number of the bad guys bear Arab and African names.

Given the game's Christian devotion, your goal is not to wipe out the enemy as in a typical RTS game but to convert as many neutrals and baddies as possible by raising their spirit level. You seek out these people and directly target the ones you want to save with the recruit ability. If all goes well, he or she will soon be turned into a friend in either a Ned Flanders-like sweater ensemble or a sensible skirt and pumps. These drones can then be sent to training centers for instruction in their new Christ-inspired careers. Soon you've got builders turning abandoned buildings into resource-producing venues, such as food-making cafés and money-making banks, as well as soldiers patrolling the streets. You also have special forces, such as recruiters, influencers, and healers, doing their bit for the cause.

Even though all of the above is worth more than a few chuckles, you could still make a good game based on these foundations (if you could get over the creepy brainwashing vibe you get from all the converting). However, Left Behind is not that game. All of the missions are plagued with interface problems. It often takes two or three clicks to select a neutral unit to convert. Units can be set on an auto-proselytizing mode where they can be ordered to recruit on demand, but the artificial intelligence isn't as committed to Christ as you might expect. If you set units on autopilot, they respond by just standing around, which forces you to do a lot of hands-on conversions to keep up with the Antichrist. Even if this function did work, you would still have to take over units on occasion because they regularly get stuck behind lampposts and parked cars.

You get stuck behind objects too. The tall buildings of NYC constantly interfere with camera angles. While you can see friendly unit silhouettes through structures, camera rotation is often blocked. You can scroll back and up to look over buildings, but then you're at penthouse level, and the people down below look like ants. Buildings are also quite ugly, presented mainly as featureless blobs of concrete-gray. It's tough to tell at a glance which buildings are producing which resources--or quickly determine which can be bought and remodeled for your purposes--and which are scenery.

Street design is a little prettier than that of the individual units and buildings because at least you get a few attractive elements, such as billboard ads (EB is apparently the official sponsor of Armageddon) and steamy sewer grates. People in the game share only a handful of faces and outfits and recite just a few canned lines of dialogue. You'll hear outrageous accents and corny lines like "Praise the Lord!" This sort of thing normally wouldn't be a big deal because such issues are common with standard RTS games. But here, they stand out because you're supposed to be converting individuals (a feeling boosted with detailed life stories for each and every unit), not building cookie-cutter armies of disposable grunts.

If you get past all of the engine problems, you'll quickly find that scenario design in Left Behind leaves a lot to be desired. Goals focus on tedious strolls through the mazelike city streets, searching for other true believers and constructing the same half-dozen or so types of buildings over and over again. Arbitrary yellow lines block off whole sections of the city solely to make you take the long way to objectives. Converting heathens and dodging foes, like evil rockers, is really all that you do in every scenario right through the end of the game. The only difference between the first and later missions is the toughness of your enemies and the pace at which you have to churn out the faithful.

One major annoyance with all of this is that units steadily lose spirit unless they're bolstered with regular prayer. So in addition to ripping around and recruiting every Joe Sixpack who walks by, you have to keep tabs on spirit levels. If you fail to do this, you risk a power chord from one of those evil rockers that will take you out of the game. If a regular unit drops below 60, he or she loses all training and reverts to a neutral civilian; if a hero unit suffers the same decline, you immediately fail the mission. Who knew that leading people to the Lord would involve so much micromanagement?

Multiplayer raises a few questions. This is a Christian game, where you can only play the forces of good in the campaign, so it's more than a little bizarre that you can sign on with the Antichrist in multiplayer battles. You would think that this alone would be more than enough to turn off religious folk. The two sides feature a lot of nearly identical units, though. Each faction has the same healers, the same soldiers, the same tanks and helicopters, and the same proselytizers (albeit with different names). The only significant way to tell the two apart is by looking at the evil spirits that occasionally get summoned when Global Community Peacekeeper units let their spirits get too low. Even so, these creatures wreak havoc on everyone around them no matter what their affiliation, so it's hard to consider them as evil units. At any rate, the multiplayer option is moot because the game has trouble connecting with the matching servers, and even when it does, nobody seems to be playing the game online as either good or evil.

Last but not least, you need to do some praying yourself to make this buggy mess run. Crashes are such a frequent occurrence that it seems like you've got maybe 50/50 odds between a level or a save loading properly and the game freezing up with a sound loop. Sometimes it also hard locks Windows in these circumstances, forcing a system reboot. This was even a problem for us during automatic restarts after changing the in-game resolution. The only way we could change any of the default visual settings was to manually shut down and restart the game, because letting it restart on its own always locked up our system and necessitated a reboot.

When it comes right down to it, Left Behind isn't appropriate for anyone--religious or not. It's hard to imagine RTS gamers sticking with it for long because of its many serious flaws and bugs. It's equally hard to imagine Christians appreciating a game where you can join the forces of Satan, even if only in multiplayer. On a purely basic level, you do have to at least appreciate the interesting twist on the RTS genre the game takes. But beyond that twist, there's nothing remarkable about it--other than the fact that it is a remarkably bad game. Let's hope it inspires designers to experiment with the genre, if nothing else. 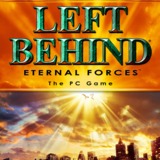 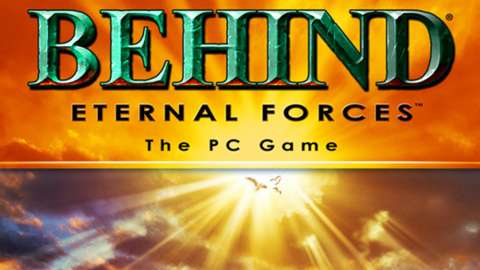 Eternal Forces is an RTS title based on the Left Behind book series, in which players can take part in the the battle of good versus evil.