Fighting In The Unfriendly Skies.

Ever since the introduction of jump pads in shooters, an FPS that offered greater freedom of flight was inevitable. Lawbreakers feels like one such result. There's a moderate learning curve to maneuvering and surviving in-air and within the myriad anti-gravity spheres of the game's arenas. When you do manage to adapt to sniping on the fly or boosting down a corridor with strategic purpose, the resulting outcomes can feel sublime even if you rarely receive the post-match MVP award.

Even with the possibility of vertical movement, FPS maps are wasted if there aren't adequate weapons and abilities to play with. Lawbreakers addresses this challenge through an intelligible diversity in the armaments and specialities spread across its nine classes. There's a reasonable assortment of advanced finesse fighters, beginner-friendly gateway classes, and well-rounded combatants who are useful in any map/mode combination. Even after about 100 matches, it was pleasing to see that no one class dominated, especially among high performing players, which is a credit to developer Boss Key's thoughtfulness in honing these characters.

The lack of standardized weapon and movement types make each of these fighters all the more distinct. The Vanguard, for instance, offsets the immense potency of having a gatling gun by not having a secondary weapon. The lack of boosts or upward mobility makes the armored Titan seemingly useless when delivering the batteries in Overcharge, but this class is invaluable for guarding the battery when it's charging at your base (the mode's main goal). And learning how to optimize a role based on your team makeup, map, and mode is part of the fun, which is perpetuated by the welcome ability to change your classes mid-match.

While Lawbreakers isn't the type of shooter that awards skill-boosting gear as you level up, discovering additional gameplay depth after getting the hang of flying becomes its own reward. Like experienced Street Fighter competitors, advanced players will feel a sense of accomplishment learning which tactics and attacks work best against specific classes. The challenge is in discerning who you're fighting in a given moment since the already-cluttered user interface does little to convey that specific kind of visual information. Tailoring an attack strategy against a class works when you're in a sudden mid-air duel just yards apart, less so when you're trading shots across a courtyard and you can't tell if you're firing at an Assassin or a Wraith.

From the Asian-influenced architectural designs of the Redfalls map or the futuristic shopping mall that makes up the Promenade arena, Lawbreakers' battlegrounds are well-carved to accommodate every class. The balanced mix of wide open spaces and confining passages in all of Lawbreakers' maps present a wealth of combat scenarios. That includes turning the tables on the predator/prey dynamic or using your environment to gain a tactical advantage. The Juggernaut, in particular, will no doubt become the bane of many, thanks to the class' hallway-sized pop-up barrier. Imagine playing the swift Assassin, thinking that you had a straight shot to deliver a ball to the goal, only to have the Juggernaut throw up a wall at the homestretch.

Such obstacles are easily countered by knowing the alternative routes. As with any shooter map, time is the only factor preventing you from committing every turn, shortcut, and hiding spot to memory. A common benefit of knowing the layout well is the palpable gratification of taking a battery or ball from the center of the map to your goal in less than 5 seconds in the Overcharge and Blitzball modes.

This map memory learning curve wouldn’t be as steep if not for all the time you spend running into locked doors and crossing invisible boundaries that pick away at your health. The maps' other shortcoming is the environmental art style, where futuristic surroundings can't mask the arenas' uninspired visuals.

The contrast of richness in functionality and lack of memorable visuals also applies to Lawbreakers’ ensemble cast. Their designs support the notion that high detail does not equate to pleasing aesthetics. You only need to look to the class selection screen to see the fighting game influence, where a large and culturally diverse group exude personality, hungry for a fight. Yet despite their array of outfits and confidence-oozing body language, this group largely lacks the magnetic charisma that inspires loyalty and discussion of favorite characters in real life.

With any given Quick Match, your mileage will vary on how many strangers decide to work as team players. It's a testament to the combative appeal of Lawbreakers that it's not unusual to engage in brief isolated duels. Whether a player's motivation is to distract an opponent from the objective or the bloodlust of notching another kill, it's a shame that there is no Deathmatch or Team Deathmatch mode to add variety to a suite of match types centered around delivering items to goals or dominating territory.

Given the unique demands of anti-gravity gameplay, the PC version's comprehensive yet concise tutorials turn out to be crucial for onboarding new users. That makes their puzzling omission from the PS4 version disappointing. The fact that you're given currency for participating in the tutorials on PC only twists the knife. To further affirm the PC version as the preferred platform, we also experienced post-match glitches that forced us to relaunch the game from time to time on PS4.

One sign of any worthwhile team-based shooter is a level of accessibility where everyone feels they can contribute no matter their play style, and Lawbreakers succeeds in this manner. And while the lack of Deathmatch is a lost opportunity, its sufficient playlist of modes offers a viable outlet to flaunt your kill/death ratio, even if it's at the expense of team success. What counts is that its fresh anti-gravity mechanics transcends its first-glance novel appeal and creates limitless combat situations that will be new and inviting to many shooter fans.

View Comments (28)
Back To Top
7
Good
About GameSpot Reviews

In the process of logging 20 hours of combat time (30 if you include the betas), Miguel tried out every class in every available map and mode combination. GameSpot purchased the game on both Playstation 4 and PC. 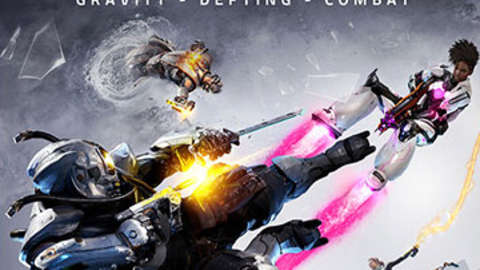 LawBreakers is a competitive multiplayer first-person shooter focused around guns, gravity, and an array of new gameplay mechanics brought to you by Cliff Bleszinski and the team of developers at Boss Key Productions.