The game engine is nearly identical to Virtua Fighter 2.

Last Bronx was a Sega Model 2 fighting game that enjoyed a decent amount of success in Japanese arcades but barely drummed up any business stateside. Only eight characters are available in the game, plus Red Eye, the game's boss. Six of the game's characters look like typical street thugs, but the other two look like they just got finished taping an episode of 90210. The big difference between Last Bronx and the Virtua Fighter series is the inclusion of weapons.

The 3D graphics are good - for the Saturn. The polygonal fighters move smoothly and quickly, due in part to the game's 60fps action. And while the game doesn't really need an illusion of speed, the characters' weapons leave trails when you swing them, which gives the game an even faster appearance. The main problem is that Last Bronx suffers from the same disappearing polygons that affected the original Virtua Fighter on the Saturn. Also, background elements occasionally vanish. It's really a very annoying effect, and it mars the otherwise clean graphics.

The game's sound and music almost aren't worth mentioning. The only facet of the audio that isn't run-of-the-mill is the somewhat catchy song that plays during the intro.

The gameplay of Last Bronx is way too close to all of Sega's other fighting games. It's almost as if Sega figured that by giving the characters weapons and slightly boosting the graphics, no one would notice that the game engine is nearly identical to Virtua Fighter 2. The controls are also exactly the same. Heck, even a lot of the combos remained the same. Although characters jump differently - taking on more of a Mortal Kombat-style flip than the soaring Virtua Fighter jumps - the characters will still float if they're being comboed through the air.

Overall, the game is too much like VF2 to be exciting in any way. Just pound on punch, then block. It's a decent game, but the lack of originality really buries it. If you don't already have a Sega fighting game, pick up Fighters' Megamix instead. It still reigns supreme. 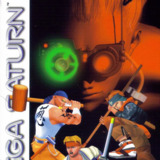 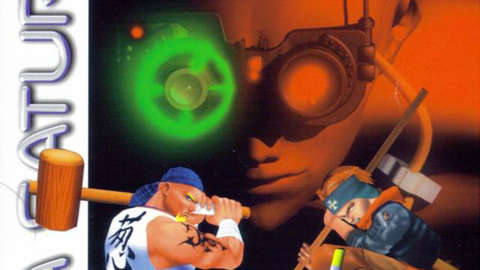 The game engine is nearly identical to Virtua Fighter 2.