Lair is a beautiful disaster.

You shouldn't play Lair. Not unless you have some morbid interest in experiencing what is quite possibly one of the worst control schemes ever devised. It's a shame because as a cinematic experience, it's stunning to watch. As a game, it's a nightmare and an embarrassment. It sounds like a fantastic idea: You fly around on a dragon, spewing fire and clawing at other reptiles while generally wreaking havoc. Too bad you're forced to use Sixaxis controls that destroy the possibility of fun and replace it with the constant need to scream expletives at your television screen.

You play as Rohn, a dragon rider in the Asylian army fighting against the supposedly evil Mokai. You can sense from the start that there's something creepy about the religious dedication of the Asylians, so the story twists that appear later aren't exactly shocking. However, the cutscenes that move the story along are terrific, giving you a real sense of the culture and backstory. They are also frequently intrusive, interrupting gameplay every two or three minutes with a brief clip to remind you of your mission objectives, as if the last four cutaways would let you forget.

You might think that flying around would be the easiest thing to do in a flight sim. Well, not in Lair, unless you're flying straight ahead in wide-open skies, without needing to turn or get close to anything else. It sounds simple enough: Accelerate by tapping X, pull back on the reigns with R2 or L2, and tilt the controller to steer. But flight is a mess. You can't make tight turns, yet you're constantly placed in levels with narrow canyons, looming towers, and a ton of enemies in the air, at ground, or at sea. All of these things are surrounded by an invisible, slippery wall that pushes you off to the side, or up, or down if you bump against it. So if you get too close to anything during any of these stupidly wide turns you're forced into, you'll be sliding off of stuff and into a direction that bears no resemblance to your actual destination.

In theory, you can lock on to other flying enemies and spew flames at them or dive into them from a fair distance. But the targeting system is a tragedy. You can't choose what to lock on to, so all you can do is keep an eye out for the fuzzy white circle to appear on an enemy dragon. From here, you have a couple of equally unappealing choices. Possibility one: You press circle, at which point, you zoom headlong into your enemy, which normally kills it instantly. It's like Joust in 3D, only shallower. During the kill, the game goes into a dramatic slow-motion mode, but the tilt controls stop steering your dragon and now inexplicably control the camera.

During this period, you can tilt the camera around and pray that another dragon in view gets the magic white circle plastered on it, in which case, you can make it a combo kill. But there are multiple insane issues with the setup. One is that during slow-mo, you can only pan the camera horizontally, so you can have foes above or below, but no chance of stringing them into a combo because you can't lock on to them. The other is that once the kill is done, the tilt controls go back to steering your dragon. This forces you to constantly adjust and invariably results in your dragon going off somewhere you don't want it to go. All the while, the camera moves from the cinematic kill angle to its original position and you have to figure out what direction you're facing. It's frustrating and dumb, considering that the analog sticks control the flight camera at all other times.

Possibility two: The targeting circle appears, and you press L1 or R1 to initiate the lock-on function. Once you're locked on, you can spew fire toward your enemy, which works reasonably well. Or you can fly alongside and whip the controller toward your enemy to ram it. This usually works OK, but there is a delay between your own motion and that of the dragon onscreen, so it makes the sideways bash rather unsatisfying.

The lock-on and auto-targeting function works with aerial enemies, as well as enemies on the ground. Missions often require you to lock on to a specific target to take it down, but as already mentioned, you can't select your own target. For instance, you may need to take down one of the elephantine creatures on the ground by locking on and hitting triangle, but you may end up getting a lone soldier instead, or a turret, or a dragon. Then, you'll need to struggle to circle around or try a 180-degree turn to head back, which requires you to pitch the controller upward and doesn't work half the time anyway. Amazingly, these ultraprecise mission objectives are coupled with a time limit most of the time, which just makes you feel that much more out of control.

You're not stuck in the air. You can land and set fire to ground troops, or eat them, or whip your tail around. Here, you use the analog sticks to move about, which is a welcome relief from all the gesticulating you'll be doing most of the time. Supposedly, tilting the controller moves the camera while you're on the ground, but it never seemed to do much of anything for us. The moments on the ground don't last long because as soon as you get used to the more intuitive analog controls, you'll need to switch your brain back and head to the skies.

You're fighting all of this madness all of the time, and it detracts from the moments that prove Lair could have actually been good in some alternate dimension. Sometimes you'll engage in melee combat with other dragons. During these times, the camera zooms in close, tribal music kicks into high gear, and you're teased with the momentary thought that, yes, this could be cool. But after some brainless button mashing, you kill your foe, the camera zips around in some ungodly fashion, and you're back to the struggle to retain sanity. There are some other context-sensitive kills, where Rohn hops off his dragon to perform some spectacular feat of derring-do while you shake the controller up and down or press the left stick in any direction you feel like. It's awesome to watch, but your part in the onscreen action is remarkably limited.

It's obvious that all the development effort went into Lair's production values, rather than into making it fun to play. It's often a stunner to look at, with environments that are huge and richly detailed. Its artistry is also dripping from every nook and cranny. Rolling hills, arid deserts, rocky seaside cliffs: All of these elements are rendered beautifully. When you throw in the splendor of distant aerial battles, undulating seas, and lovingly crafted dragons, you've got a gorgeous way to enjoy your high-definition display. But all this beauty comes at a cost. The frame rate dips and rises erratically--not enough to hinder gameplay usually, but it's an annoyance nonetheless. You'll also be treated to occasional screen tearing, seams in the geometry, and plenty of pop-up as objects get closer. The soundtrack is quite lovely, while the voice acting and sound effects are good too, so at least there is a lot here to please the senses. But the constant voice-overs reminding you of your mission objectives are repeated so often, you'll be screaming that yes, you know you need to destroy the navy ships, but you can't get your dragon to fly in the right direction.

But great visuals and sound mean absolutely nothing in Lair. Factor 5 should have made a movie--not a game. This is the ultimate example of how gameplay suffers when all the work goes into making everything look pretty. There is nothing fun about it, so forget the online leaderboards and don't worry about unlocking a few dragons in the stable or gunning for a high score. Forget Lair entirely. It really seems like the developers forced themselves to stick with a barely-workable control scheme just to make use of the PS3's flashy new tilt sensor support. 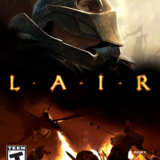