IMPORT: Its premise is rather simple. You control a stick that spins at a constant speed, and you must maneuver this spinning stick through tightly designed mazes without touching the walls of the maze.

IMPORT REVIEW: Nintendo's spinning-stick puzzle game, Kuru Kuru Kururin, demands equal portions of brainpower and dexterity. Its premise is rather simple. You control a stick that spins at a constant speed, and you must maneuver this spinning stick through tightly designed mazes without touching the walls of the maze. Expert timing is of prime importance, as some passages can be taken only when your stick is at the proper angle. The resulting game is a fast-paced puzzler that keeps you on your toes.

Like most puzzle games, Kuru Kuru Kururin makes an attempt at a storyline, but the story doesn't have any impact on the game whatsoever. It seems that your spinning stick is actually a little hovercraft with a large spinning rotor. The pilot of the craft is a small duck, who is out to save a collection of recently kidnapped ducklings, which are positioned in various spots around the levels. Picking up the birds and other icons in the levels lets you customize your stick's color and appearance. This is handy for the multiplayer mode, as it gives your stick a little personality.

The game is broken up into different modes. The main story mode takes you along a world map and puts you in levels of larger and larger sizes. Challenge mode gives you a simple list of 50 short levels and challenges you to beat them in the shortest time possible. Practice mode lets you play any previously completed stage from the story mode. Finally, multiplayer mode puts you up against a maximum of three other sticks in a race to the finish. Kuru Kuru Kururin supports the one-cartridge multiplayer option, so you'll need only one copy of the cart to play multiplayer games.

The game controls rather simply. The D-pad moves your stick, and the buttons speed up your movement. Your stick rotates at a constant speed, though some levels have springs on the walls, which let you change the direction of rotation. You have an energy meter, and your stick can withstand three hits against the wall before exploding. Hitting a wall also adds three seconds to your time. Losing has no real consequences, as you're given unlimited chances to try each level, though that doesn't make losing near the end of a level any less maddening. Graphically, the game has a simple but effective look to it, and the ability to customize your stick goes a long way. The soundtrack is typical puzzle-game fare, with some digitized effects, such as speech or the sound of breaking glass when your stick is destroyed, sprinkled in for good measure.

Kuru Kuru Kururin may technically fall into the same category as stinkers like Irritating Stick for the PlayStation, but the game works really well on Nintendo's new handheld, delivering a quick-moving puzzle game that is excellent at filling up small periods of free time with its short, level-based nature. As one of the few Japanese GBA games that hasn't yet been announced for US release as of this writing, Kuru Kuru Kururin makes a pretty good choice for players looking to import games they wouldn't otherwise see. 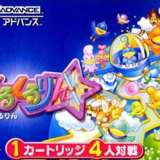 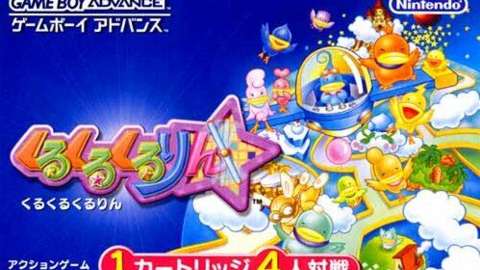 IMPORT: Its premise is rather simple. You control a stick that spins at a constant speed, and you must maneuver this spinning stick through tightly designed mazes without touching the walls of the maze.