Flawed motion controls and baffling design choices sap all the fun from this goofy martial-arts-themed brawler.

Who among us hasn't imagined jump-kicking and karate-chopping our way through hordes of thugs with the grace and power of Bruce Lee? Kung-Fu Live plays on this fantasy, seeking to make you feel like a martial arts star no matter how little fighting skill you might actually possess. Unfortunately, while it displays a bit of promise early on and provides a few fleeting moments of shallow but silly fun, it quickly loses sight of what makes these moments enjoyable and becomes as painful as trying to chop a huge stack of cinder blocks in half with your forehead.

Kung-Fu Live transports you into its martial arts action via the magic of the PlayStation Eye camera, so before you can start playing, you need to spend some time setting things up. Kung-Fu Live requires more room than many other motion control games; you need several feet of clear space in front of you and to either side. You also need to get the camera situated just so, to ensure that you appear the right size on the screen. Even after all that is done, unless you are playing in an evenly lit environment against a solid background, you can expect some significant flaws with the way you appear in the game. Aspects of the background may be interpreted as part of your body and regularly appear in the game, or the game may fail to pick up certain parts of your body, leaving you with a big hole in your chest or some other strange anomaly.

Despite these issues, Kung-Fu Live initially seems poised to deliver some cheeky chopsocky fun. Attractive animated comic book art sets the stage: You play the part of a new employee at Madame Wei's Comic Emporium. During your first day on the job, you are sucked into one of the dusty old books lining the shelves of her shop and find yourself transported to a moonlit temple where you must fight off a series of attackers using martial arts moves of your own devising. The freedom to punch, kick, flail, grab and swing nearby objects, and basically do whatever you want in a game that interprets these silly actions as powerful kung fu attacks is humorous and enjoyable. This silliness makes you feel like the star of an ultra-low-budget martial arts movie in which some of the entertainment comes from the laughable fight choreography, and the deliberately goofy story supports this lighthearted vibe. And although the game's ability to detect your movements is very flawed--you might unleash a flurry of quick punches only to have one of them read as an attack, for instance--such issues matter little in the easy early stages. You may find yourself sweaty and short of breath, but when you're knocking enemies out like a martial arts master, it's worth it. The battles take place in colorful comic book panels, which also helps to make Kung-Fu Live an initially enticing experience.

But the charms of this silly, anything-goes gameplay last only a short while. Soon your biggest struggle is not against thugs, giants and evil monsters, but against Kung-Fu Live's deeply flawed controls. For starters, your control of side-to-side movement is limited. You can run left or right to move in that direction, but you will often come to the edge of the camera's range and still be some distance from the opponents you want to attack. You can try scurrying back and forth to inch yourself forward, or you can use a special move you acquire early on called the power punch, which moves you forward a great distance. But this move is the only reliable way of covering a lot of ground, and on top of that, it's the only special attack you have at your disposal for the first several stages. This means you need to rely on it so much early on, for both moving and attacking, that the action quickly falls into a repetitive lull.

Additionally, your enemies soon start to block a huge number of your attacks. Kung-Fu Live wants you to employ tactics in your fighting, but the controls aren't nearly precise enough to consistently detect when you strike low or strike high, so trying to get past your enemies' guard becomes frustrating. You're expending lots of actual energy punching and kicking the empty air and are often left with little to show for your efforts. The controls can't support the sorts of movements the game requires or the sorts of challenges it introduces, so these elements only succeed in moving the game away from the shallow but silly fun of its earliest moments. Eventually, you acquire three other special moves--one that slows time, one that shakes the ground and throws your enemies off their feet, and one that lets you zap your foes with lightning--but by this point, the combat is too irritating to make using these moves much fun.

As you progress, the game's frequently flawed interpretation of your inputs becomes increasingly problematic. For instance, you can escape tight spots you're in by performing a flying somersault, which is done by jumping and bending back in the air. However, the game's ability to interpret this move is spotty, and if it doesn't correctly read the move when you're cornered by a massive bruiser or in some other situation where your defeat is imminent, you may taste the particularly bitter brand of frustration that comes when poor controls contribute significantly to your failure. Defeat is made all the more maddening when it comes a few rounds into a level, because continuing means having to repeat the earlier, easier rounds just to get back to facing the baddies who finished you off previously.

To make matters worse, the level design and enemy behavior eventually conspire to make your experience with the game even more unpleasant. At one point, you must defeat an enemy who enjoys teleporting from one side of the stage to the other and standing on platforms. Not only must you race across the stage to attack her, which is troublesome because of the extremely unreliable controls for side-to-side movement, but you must also leap your way up onto the platforms where the foe is standing. You might leap with all your might, only to see your in-game self hop slightly into the air and not come anywhere near the platform where your waiting foe stands. Once again, the fact that you're expending actual energy in these fruitless pursuits rather than just pushing buttons on a controller makes such moments a great deal more infuriating.

There's a local multiplayer option in which friends can take control of various enemies with controllers while you try to fight them off. While this can elicit some laughs, your friends are as likely to laugh at how poorly the game interprets your movements as at your improvised martial arts skills. There's a kernel of goofy fun buried in Kung-Fu Live, but the game requires you to do way too many things that the poor controls don't reliably let you do, spoiling the chopsocky spirit and making this a game even black belts are better off avoiding. 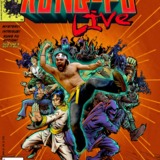 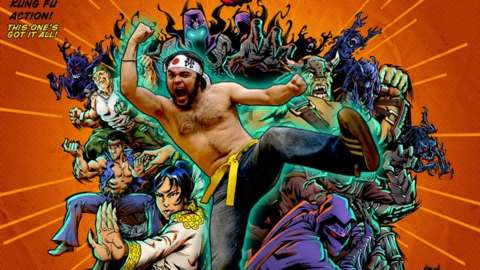 Step into the world of martial arts in this humor-toned and sporty beat-'em-up adventure!