Konami Krazy Racers is an incredibly entertaining game that's certainly worthy of the attention of any kart-racing fan.

Though there have been numerous Mario Kart clones released over the past few years, very few of them manage to successfully follow the same recipe that made Mario Kart so popular. Konami has taken the first step on the GBA by releasing its first kart-racing game, Konami Krazy Racers. You can select from various characters that have appeared in Konami games over the past few years--some more readily identifiable than others--such as Dracula from the Castlevania series, Goemon from the Mystical Ninja series, Gray Fox from Metal Gear Solid, and the Easter Island head from the Gradius games, just to name a few. Krazy Racers has all of the standard kart-racing modes like the grand prix, time-attack, and free-run, but it also adds a few new features that help make it one of the most entertaining Game Boy Advance launch games.

Fans of Mario Kart and similar games should be able to jump right into Krazy Racers and have no problem winning races early on. The game features a very basic control setup with the two face buttons acting as the brake and accelerator, while the two shoulder buttons let you jump or use whatever item is currently in your inventory. While you do use the jumping ability quite often in the later tracks to avoid falling into chasms or small holes, it really doesn't let you do much more than that. You can powerslide briefly, but very few tracks have been designed with turns that give you enough space to make a powerslide worth your effort. All of the characters in Krazy Racers have different abilities. For example, Dracula has slow acceleration but a high top speed and moderate turning abilities. Conversely, a character like Gray Fox has great acceleration, a slow top speed, and average turning abilities. So the character you select can have a substantial impact on the outcome of a race, as some characters are better suited for specific tracks than others. Items located on the track are color coded so that both offensive and defensive weapons are red, while the speed boost item is blue. If you happen to be carrying a red item, but you drive over a blue item, then your inventory automatically switches to the blue item, essentially giving you the option to change your racing strategy.

Nowhere does this become more apparent than in one of Krazy Racers' unique features, the driving tests. Before moving onto a new class and competing in a series of new grand prix cups, you have to successfully complete a series of racing tests, which range from simply winning a one-on-one race to beating a race time on a specific track. As you progress through the cups, these tests become much harder, placing greater importance on individual character abilities as well as your own. These tests are a great change in pace after completing a long stretch of standard races, and the later tests are difficult enough that even the most skilled kart driver will spend a large portion of time trying to complete them and move onto new cups.

Another nice feature in Krazy Racers is the shop area where you can buy race items with coins you collect on the track. There are rockets (both seeking and standard), bombs, protective shields, as well as items that affect all of the characters on the track at once. All of these items can be found during a race, but buying them at the shop gives you a special advantage, as you're able to use the item you bought more than once. This makes the grand prix mode a little easier, particularly when you buy the more powerful offensive items, but the difficulty is somewhat balanced by some of the driving tests which prevent you from using items.

If you've completed the grand prix mode or are just tired of the same style of racing, Krazy Racers also offers a minibattle mode with two different gameplay modes. The first is the bomb-chaser mode where one character needs to get rid of a bomb before it explodes, by making contact with another character. The other mode is called chicken, and all you have to do in this mode is go full speed and then time your braking so that you don't skid off the end of the track. The closer you get to the edge without falling off, the better your chances are of winning.

Both of these modes are fun, and they serve as a nice diversion from the typical racing modes, but they're even more fun in multiplayer. Up to four players can compete in all multiplayer modes, and even if there aren't four players for bomb-chaser, chicken, or free-run, then computer opponents will be entered in their place. Krazy Racers' multiplayer works very well with no noticeable problems.

Visually, Konami Krazy Racers is an excellent demonstration of the Game Boy Advance's sprite-scaling and rotating abilities. The game moves smoothly, and there's never any sign of slowdown or any sort of visual problems. The diverse track design is generally excellent, with each track visually representing one of the major Konami franchises, such as the Metal Gear track complete with warehouse crates or the Castlevania track and its looming bats. However, there are moments where it becomes difficult to gauge where the track is heading even with arrows indicating the proper direction. The characters also look solid, and with the exception of Dracula, fans should be able to recognize their favorite characters instantly.

With the exception of the title screen track, Krazy Racers' music doesn't turn out quite as well. The music selection itself is good--especially the Metal Gear and Castlevania themes--though some may not care for the Game Boy-like quality. However, the sound is generally good, with plenty of different engine rumbling noises and sound effects for different weapons. Characters even say a few words or utter a few grunts, when you pass by another character. Oddly enough, music is absent in one of the multiplayer modes.

The grand prix mode and the driving tests present a strong challenge that will keep you playing these single-player modes for hours, and near flawless multiplayer only adds to the overall replay value of the game. Konami Krazy Racers is an incredibly entertaining game that's certainly worthy of the attention of any kart-racing fan. 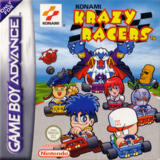 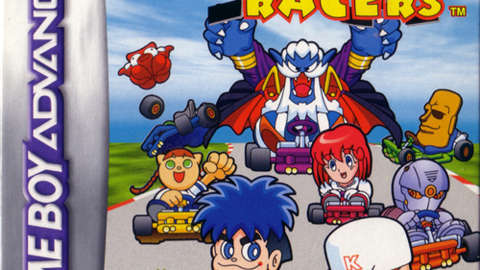 Konami Krazy Racers is an incredibly entertaining game that's certainly worthy of the attention of any kart-racing fan.