Overall, Knockout Kings is the best representation of the sport of boxing in a game so far.

Knockout Kings is not only the first boxing game released here in the States for the PlayStation, but is also the most accurate representation of the sport of boxing in a video game to date, though it still has plenty of room for improvement. One area that doesn't need any improvement is its authenticity. The game has 38 boxers from the light, middle, and heavyweight divisions from the past and present including Evander Holyfield, Ike Quartey, Lennox Lewis, Michael Moore, Shane Mosley, Oscar De La Hoya, "Sugar" Ray Leonard, and Muhammad Ali. For even further authenticity the designers have included real-life venues to fight at like Caesar's Palace and Madison Square Garden.

You can select from three modes of play. Exhibition allows you to pick your favorite fighters and go at it. Slugfest, which is an arcade-style mode, allows you to pick any two fighters from any weight division and slug it out in a match with exaggerated knockdowns and punches. The career mode lets you create your own boxer from scratch and try to take him from the bottom of the ranks to the top for a shot at the title. In this mode you have 30 generic fighters that you must face. Before each fight you can select what type of training you would like to do. You can select between working the heavy bag, which improves your power, or hitting the speed bag, which helps your speed. Unfortunately, this is merely something to watch for a minute.

Visually, Knockout Kings is simple but effective. The fighters are made up of 3D polygons, but they don't look like the typical boxy polygonal characters we see in most games. Instead, the fighters have smooth, realistic-looking bodies, with shoulder and elbow joints that work accurately. The animations of the punches, knockdowns, taunts, and general ring movement also look great. Also, most of the fighters look like their real-life counterparts, not only in facial features but also in body size and motion. The only negative aspect of the graphics is the crowd, which is basically just a still picture. Although the sound of a roaring audience almost makes that still image come to life.

All of the sound effects are fairly accurate. The punches, referee, and fighters' grunts are all pretty good. But what makes Knockout Kings sound so real are the real voices of Al Albert and Sean O'Grady of Tuesday Night Fights fame, who provide commentary during the matches, though their vocabulary is unfortunately a bit on the limited side, as they pretty much just stick to saying "nice (insert name of punch here)" again and again. Knockout Kings also has the voice talents of ring announcer Jimmy Lennon Jr. and referee Mills Lane as a nice touch for big fights. When you're climbing the ranks you have generic refs and ring announcers that work the matches.

On the control side of things the game feels a bit sticky because you have to get used to the amount of time that it takes for the animations of different punches. But once you get the hang of how the fighters move around the ring, it's not a problem. However, the game only has three control configurations. And the simulation control setup isn't what I would consider an ideal setup. The D-pad handles ring movement, you have a left jab button, right cross button, body blow button, and an uppercut button. You can pull off little preset combos, power hooks, and low blows by holding a shoulder button while pressing another button. You can even head-butt your opponent (no, there's no ear biting). When defending, you can block high and low, bob and weave, duck, clinch, and shove your opponent away. All of these moves are executed by hitting various button and D-pad combinations. While the preset button configurations get the job done, it would have been better if you could assign specific punches to the button of your choice. The AI of the computer boxers is fairly decent. As in real life, there are two main types: boxers and punchers. Toward the top of the ranks the opposition gets a little tougher, since each opponent seems to be able to hurt you with just about any punch and is nearly impervious to damage.

Overall, Knockout Kings is the best representation of the sport of boxing in a game so far. Although it is missing some of the little nuances of real boxing. It's easier for a die-hard boxing fanatic to see all of the little things it could have done a touch better; like parrying, working the angles, and punching power balance. The casual boxing fan probably won't notice and will think that it's the best boxing game of all time. Which is true, though it's still missing a few things that keep it from being the perfect boxing sim. Any boxing fan will love Knockout Kings, and being one myself, I just hope that Electronic Arts continues the series and keeps making it better. 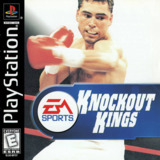