While not for everyone, Knights of Honor is an original, enjoyable, and deep strategy game about the Middle Ages.

It's generally hard to be surprised in the real-time strategy genre these days, but you have to give the developers at Black Sea Studios credit, because they've created one of the most original and enjoyable real-time strategy games in recent years. With that said, it should also be noted that Knights of Honor is a game that's not for everyone. This is an incredibly deep medieval kingdom simulation, and it's the closest to actually being able to put you in the ruling seat of a feudal land.

The idea in Knights of Honor is that you can take command of one of more than 100 different European countries from three different eras of European history. Your goal is to survive and expand. This means that you have to arrange marriages to ensure an heir for your ruling family, as well as improve your economy, make diplomatic and trade agreements with other countries, and assemble armies to stamp out rebels and wage war on your enemies. You can even dispatch members of your royal court to infiltrate enemy courts to spy. The end goal is to accumulate enough political and military might where you either win by score or are crowned the ruler of Europe.

There's no question that Knights of Honor is a deeply ambitious game, but somehow it works, thanks to a somewhat elegant interface and some well thought-out game mechanics. Basically, it's best to think of Knights of Honor as a continual-time game, because it's not really a clickfest. The game plays at a generally steady pace, during which you'll spend a lot of time managing your kingdom. A single game can easily cover centuries of European history (not to mention dozens of hours in actual playing time), and one of our major complaints with it is that there is no sense of time passing by.

At the heart of your empire are provinces, each of which contains a central town that must be conquered if you wish to control the entire province. These towns are the source of your armies, food, wealth, and more, and some towns may have access to bonus resources that others don't. For example, a town with rich pastureland can support sheep and cattle, which not only will provide meat, but will support further specialized structures, such as tanners that produce leather. These resources are important, because if you can accumulate enough domestic resources and import certain exotic resources, you may unlock kingdom advantages, which are bonuses that reward extraordinary achievement. For instance, you can boost the agricultural output of each province considerably, as well as increase the size of a town's granary, which determines how long a town can hold out during a siege.

Meanwhile, each town has a limited number of building slots, which means you can't build each city with every improvement. You therefore have to determine what function a city will take. For example, your interior town may produce goods and resources, while your border towns can be fortified to withstand enemy sieges. In addition to a town, each province has a mix of farms, villages, and monasteries that are completely vulnerable to any pillaging army. This means that while on the offensive, you can sack a village or farm for gold, and while on the defensive, you must protect your lands from attack.

There are two ways of resolving combat in Knights of Honor. The first is simply to let your marshal (basically a general) fight the battle himself, which allows you to focus on other things, or you can take direct control of your forces on the battlefield. In that case, you drop down to a 2D map of the battlefield and control your forces by choosing formations and maneuvering them on the battlefield. While directing battles can be tricky, it does give you the opportunity to influence the outcome. Your armies can be a mixture of different units, depending on where each unit was recruited. It's possible to create a very powerful (and expensive) cavalry force, a mix of knights, swordsmen, and spearmen, or just a gaggle of poorly trained peasants. Each nation has unique units that it can recruit, as well. Units can gain experience over time, and elite units are worth their weight in gold in battle. Your marshals also gain experience over time, and you can upgrade them with up to six different skills, each of which can be upgraded up to three times. For instance, the dread skill means that enemy armies will lose morale when facing that general. At higher levels, the dread skill increases the morale loss.

Knights of Honor also benefits from having a deliberate old-school look to it. The game takes place entirely in 2D, and the graphical style lets it look and feel different. It also looks good, in a quaint way. That's not meant as a criticism, but it's very much a game where the focus is on the gameplay and not on the graphics. If anything, the look of Knights of Honor seems fitting, since this is a game of the Middle Ages. The map is rendered with nice pastoral touches, like eagles flying in the sky or villagers hauling goods to town to sell.

The game does have a number of flaws, though. The artificial intelligence, though improved from the initial European release, is still a bit too easy to manipulate. For example, as soon as a nation declares war on you, all you have to do is request an audience, and odds are they'll agree to make peace immediately. The interface could use a few improvements, as well. In particular, when you're being asked to make or break diplomatic relationships, it would be helpful if the game gave you the status of the nation you're speaking with. When a royal ruler offers up a province to bribe you to enter a diplomatic alliance, it would be helpful to know where that province was. And while your kings age and die, your generals seem immune to the passage of time. The royal court system is a bit strange in that it seems that your king may actually grow younger at times, rather than older. Also, children can age out of order in that the second or third born reach maturity before the firstborn. However, most of these flaws are fairly trivial. The game itself is very stable, and we experienced only one crash during the many hours of play.

Knights of Honor ships with multiplayer, but you can't play the epic campaign game in multiplayer. That would probably be impossible to coordinate, anyway. What you can do is battle it out in a variety of historical battles and other gameplay modes, such as town assault. However, it's clear that the single-player game is the strength of Knights of Honor, and the multiplayer game doesn't seem to have much of a following. In summary, this is certainly a game that's not for everyone. But if you're looking for a deep, slow-paced game, and if you love medieval history, it'll be hard to go wrong with Knights of Honor. 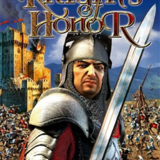