Knights in the Nightmare Review

Knights in the Nightmare is a rich tactical role-playing game that tells the tale of the kingdom of Aventhiem--and quite a tale it is, too. Picking up soon after the death of a brave and beloved king, the story is a complicated but compelling one, packed with political schemes and betrayals, as well as ancient rivalries and new alliances. It also boasts a cast of characters that's hard to keep track of because it's so large. The story jumps around in time and leaps frequently between knights and nobility, creating a rich sense of Aventhiem's people and history. It advances at a deliberate pace that only very slowly makes clear what's transpiring, but this serves to make each upcoming scene all the more tantalizing. You're free to skip the between-battle story sequences, but if you do, you'll be missing a significant part of what makes Knights in the Nightmare a rich and rewarding experience.

The complexity of the story is more than matched by the complexity of the gameplay. The action in Knights in the Nightmare consists of a series of small-scale battles in which you control a wisp with the stylus. As this lost soul--whose true nature becomes clear in time--you have the ability to give life to fallen knights, and as the wisp journeys toward its destiny, you use the souls of these knights to battle the monsters and evil forces that stand in your way. The battles play out in a fashion that is dramatically unlike those you'd find in a typical tactical RPG. Rather than worrying about your units taking damage, you live or die by the wisp. Using the stylus, you maneuver the wisp around the isometric playing field, carrying weapons to your knights, charging them up to unleash attacks, and trying desperately to avoid enemy attacks. These attacks take the form of a shower of stars, massive snakes that circle the borders of the screen, huge columns of energy, and much more. In each round of a battle, you have a set amount of time to charge up your knights' attacks, but each time the wisp comes in contact with an enemy attack, you lose some of that very precious time. Avoiding enemy attacks is similar to weaving your way through a shower of bullets in a shooter, and it creates all the white-knuckle tension you'd expect when the pressure is on and the slightest slipup can spell defeat. Occasionally, the screen grows too cluttered and makes your life even more difficult, but for the most part, these fast-paced battles are an unmitigated blast.

Glancing at a battle in Knights in the Nightmare, you might assume that it's more of a precision-based action game than a tactical one. On the contrary, Knights in the Nightmare combines the action of battle with impressive tactical depth. The decisions you make before a battle are crucial, and initially, it's a challenge just to learn all the factors you need to take into consideration. The battles take place on small fields made up of squares. The chesslike unit types (seven regulars, plus an occasional hero companion) have specific directions and ranges for their attacks, so selecting the best unit for each of your allowed positions is essential. You're also limited to bringing just four weapons into battle, and weapons have restrictions based on class, level, and an "act phase." The two act phases are law and chaos, which you can switch between at any time during battle. You'll need to switch between them constantly to gather the gems the wisp needs to collect. These gems are used to direct knights to attack with a weapon. However, most weapons can only be used during either the law or chaos phase, so it's important that you balance your weapons between the two phases or you may find yourself out of gems and unable to perform any skill attacks.

There's more to consider too, including the durability of your items, the elemental weaknesses of the monsters you're about to battle, and the amount of time a given weapon's attack takes to charge. The learning curve here is exceptionally steep, and you may find yourself initially frustrated as you go into battle with units in positions from which they can't land attacks and armed with weapons they can't effectively use. The flipside of this frustration is the sense of gratification that comes from learning the ropes and going into battle armed and prepared for victory. To its credit, the game places all the information you need to play well at your disposal, which is organized in three tutorial sections you can peruse at your leisure.

There are also crucial decisions to be made between battles. You'll need to fuse weapons together to repair them and use items collected in battle to strengthen them. As you progress and recruit units to your army, you'll choose which units to spend experience points on and level up. You may also find that some units are more useful as sacrifices than as soldiers. Through the "transoul" process, you can select a unit to sacrifice and merge its soul with that of another unit. Doing so dramatically improves the recipient, but death is permanent in Knights, so it's a decision that requires careful consideration. For better or worse, Knights allows for only one save file, which lends gravity to your decisions that they might otherwise lack, but it also limits your ability to experiment with different rosters. The game prevents you from getting yourself into an insurmountable situation through poor decision making by filling out your ranks with nameless knights if your own forces are lacking; these nameless knights can't be recruited, however, and leave after one battle.

Knights in the Nightmare is a beautiful game. Character sprites are ornate, colorful, and detailed. Environments are lush and atmospheric, and attacks look powerful. There aren't any prerendered cutscenes here, but the visuals and language used to tell the story are so evocative that you won't mourn their absence. The sound is every bit equal to the visuals, with a gorgeous score and dramatic sound effects that pull you in to the action. The battle cries of your knights may repeat too often, but this is a minor issue. 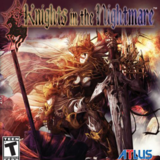